The PRIG; An Anti Armour Weapon that Fired…Cookies!?

The Northern Irish “Troubles”, which lasted broadly from the late 1960s to the late- ‘90s was, to put it mildly, a deeply turbulent and traumatic period in British and Irish history. I won’t go into the history of this episode, there are plenty of articles out there that explain it already, but essentially sectarian violence between Catholics and Protestants led to the long-term deployment of the British Army throughout the province of Ulster.

For the Republican guerrilla forces, typified by the Irish Republican Army (the IRA), the deployment of British soldiers and the reequipping of the Ulster police with lightly armoured vehicles represented a problem. 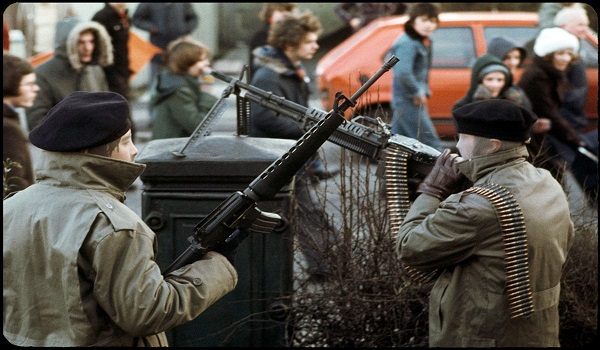 They were largely reliant on small arms to conduct the hit and run raids and ambushes that they used to inflict casualties on the security forces – logical because in any stand-up fight against the authorities they were almost inevitably going to get the worst of it. Firearms could be more easily smuggled into the territory, stored in secret caches, and retrieved for use in operations before being hidden away again.

But the increasing use of armoured vehicles by the security forces meant that the IRA’s active cells had an increasingly hard time doing any damage in their attacks. Naturally, weapons like IEDs, emplaced in culverts under roads, became a standard tactic.

But again, this limited IRA units tactical capabilities and exposed them to interception during the setting up of any such attack. What they really needed were light anti-armour weapons.

International support, primarily from Libya, meant that some limited supplies of light anti-armour weapons, mainly RPG-7s made in the then Warsaw Pact, did get into their hands. 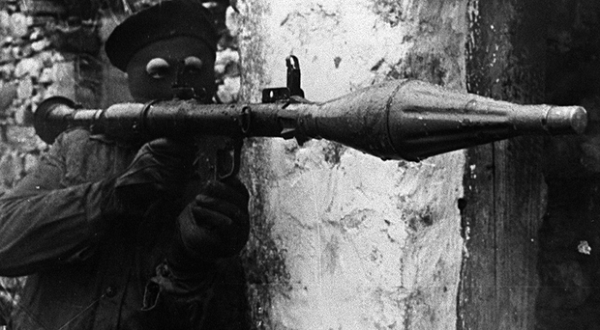 And these could do formidable damage to the light vehicles utilized for internal security by the British Army and the Ulster police. But numbers of such weapons were always limited, and ammunition supplies extremely low.

So, the IRA began to develop weapons of their own that could destroy armoured vehicles. And this led to a quite frankly remarkable line in weapon development.

Initial attempts were to develop a drogue grenade. This was a hand thrown device, apparently modelled on the Soviet RKG-3 anti-tank grenade. 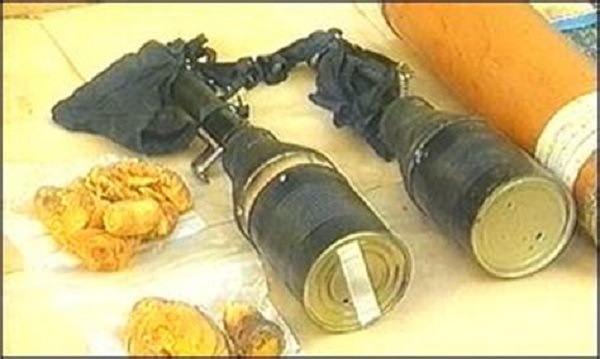 Essentially built with a standard empty food tin as the body, this was then fitted with a shaped charged explosive that proved capable of penetrating the thin armour on British Army Pig APCs and the armoured land rovers used by the police. But it was a very short-range weapon, hardly ideal.

The IRA’s technical division then came up with what the British Army called the Improvised Projected Grenade. This was a single shot and reloadable grenade launcher of rather basic design. 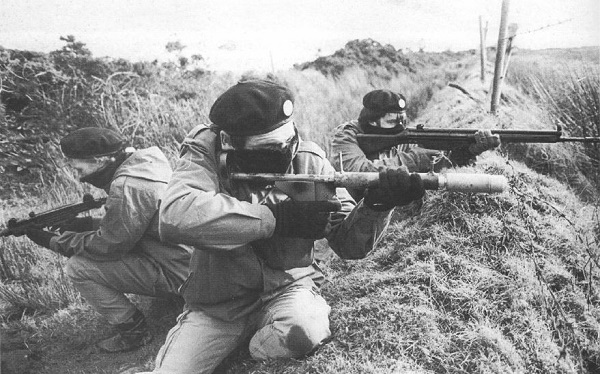 Though it did mean the user was able to launch an explosive projectile at greater range than the hand grenades, it was a primitive affair that wasn’t particularly useful against moving vehicles. It seems instead to have been used mainly to fire high explosives over walls into security forces compounds. It also apparently had one hell of a kick, and anyone firing the device could expect to suffer a bruised shoulder.

Obviously, this still wasn’t up to what the IRA wanted, so they went back to the drawing board and in the early 1990’s fielded a new weapon. 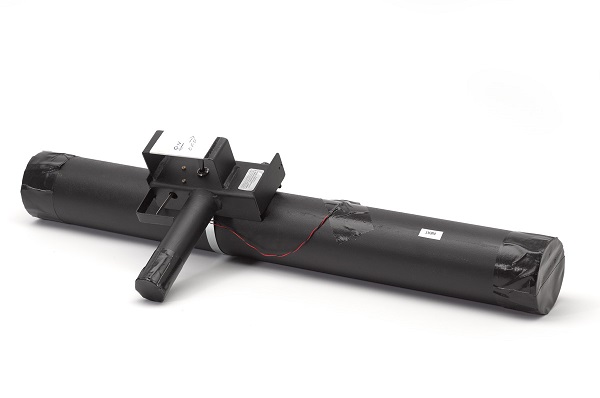 And this was, on paper certainly, a huge improvement. A shoulder fired weapon the PRIG used the same tin can style projectile as the earlier drogue grenade. 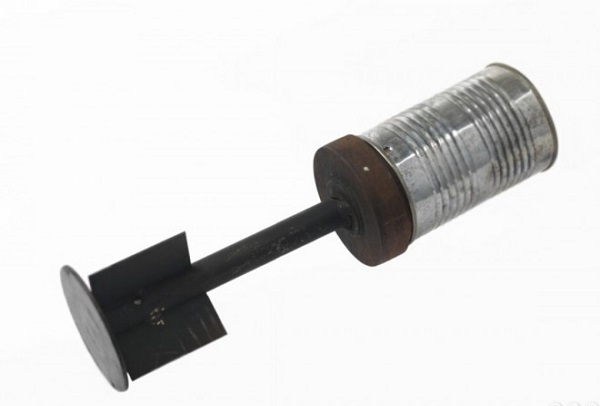 This had a 600-gram (1 lb 5 oz) Semtex plastic explosive charge with a metal cone liner that acted as a HEAT shaped charge, essentially the same type of warhead as used on many military anti-tank weapons. I haven’t been able to find any definite figures on penetration capability, but such a warhead, with a diameter of roughly 70mm, would be quite capable of punching through any target the PRIG was likely to be fired at.

The PRIG itself was essentially a simple steel tube to which was affixed an electric trigger mechanism, often made up of light bulb holder as an arming switch. Once armed, the main trigger could be pulled, which sent an electric current from standard household batteries to ignite the propelling charge. 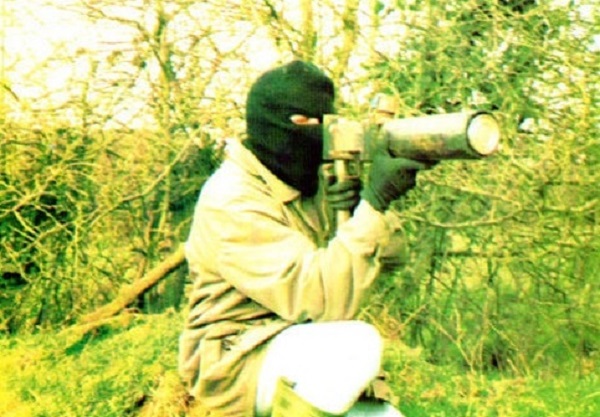 This was a simple black powder explosive, nothing especially complicated there. But what was clever was the PRIGs projectile firing method.

For this, the PRIGs designers borrowed from a contemporary anti-tank weapon, the Armbrust.

Traditional recoilless weapons generally utilise the same method of operation. The propelling charge detonates, shooting the projectile forward. But the force that moves in the opposite direction, which would normally cause recoil, is allowed to vent out of the back of the weapon. 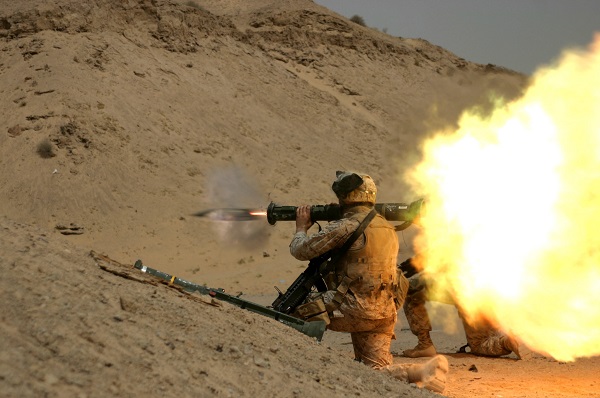 This however causes several issues. The back blast from a weapon such as an RPG or recoilless rifle is extremely loud and noticeable. It is also a problem for those wanting to use such a weapon in a confined space, such as a room or confined urban area. In fact, the back blast can represent a significant hazard to the firer or other personnel if they are used in confined spaces without a suitable exit point for the force to vent.

Conventional militaries generally train anti-tank weapon operators to bear this in mind as part of their qualification of these sorts of weapons.

But the Armbrust utilized another method.

Because every action has an equal and opposite reaction, the recoil of the weapon can be neutralized by a projectile of equal weight being fired in the opposite direction to the main projectile.

The Armbrust did this by having the propelling charge located between two pistons with the anti-tank projectile in front of one and a plastic counterweight behind the other. Of course, you don’t want to be shooting a solid projectile out behind you, where it could ricochet all over the place, so the counterweight was composed of five thousand plastic flakes that would immediately explode in a spray out of the rear of the Armbrust when it was fired. 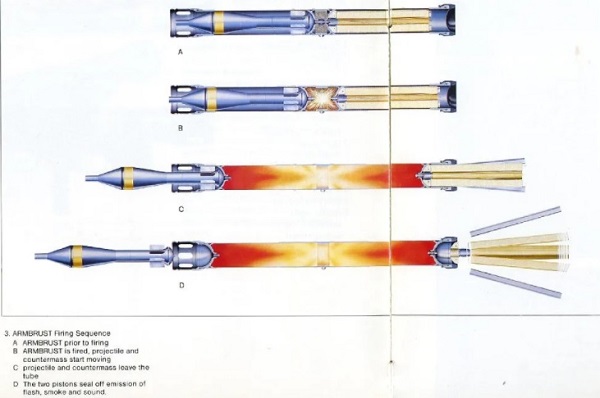 Which meant you could use an Armbrust to take on a main battle tank from an enclosed space and suffer nothing in immediate consequence except the world’s most rapid confetti scattering. The effect would also minimize the weapons flash and smoke signature, a very important consideration in a close-range ambush of an armoured vehicle.

It was the counterweight concept that the PRIG replicated. The propelling charge was located between the projectile and a dispersible counterweight that would negate the weapons recoil when fired. But the IRA took an interesting extra step. 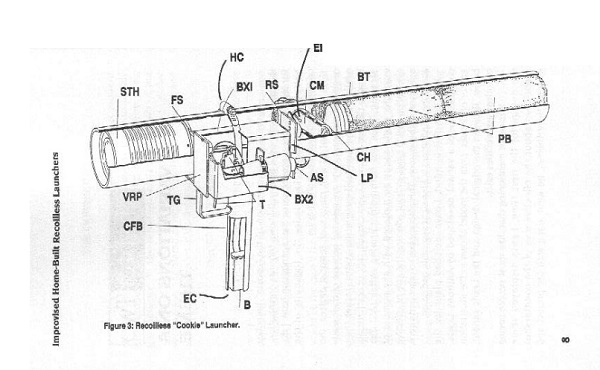 They weren’t particularly keen on spending money on expensive plastic flakes that then had to be precisely packed into containers that would fit the PRIG. They came up with a simpler solution.

The counterweight for the PRIG’s projectile…was two packets of digestive biscuits, a common and delicious snack that can be found in literally any shop in Britain.

These would be wrapped in a suitable cloth and crushed up and were then able to serve as the counterweight to the projectile.

So, when you fired a PRIG, what you got was an old soup tin or similar capable of penetrating the armour of most APCs coming out the front, whilst out of the back you got a fine spray of cookie crumbs.

It might all sound a bit nuts, but the PRIG does appear to have seen use. By the time of the IRA ceasefire in 1997 it had been used in several actions against the security forces and a number had been recovered by the British, who concluded that some limited form of serial production was being undertaken of the weapon.

The subsequent Good Friday Agreement meant that peace finally came to Northern Ireland and that peace has, largely, been maintained since. As a result, the PRIGs have either been retired or returned to their hiding points in case of future need.

But this much is sure, it remains an extremely interesting weapon and one that fully demonstrates the ingenuity that can be put into these sorts of devices.