The saga that is the Indian Air Force’s (IAF) efforts to purchase a new multirole fighter-bomber has taken another twist as American defence giant Lockheed Martin have offered the exclusive rights to their proposed F-21. Should India select the updated version of the F-16 Vivek Lall, vice president (strategy and business development) for Lockheed Martin, said that: “We will not sell this platform and the configuration to anyone in the world. It is a significant commitment by Lockheed Martin and it shows importance of India and importance of unique requirement India has.”

The IAF had initially sort in 2008 to acquire 126 new aircraft to replace aging MIG-21s still in inventory with a state-of-the-art multirole aircraft. A fiercely fought battle for this contract, recognised as potentially the most lucrative export order possible in the field, was eventually won by Dassault Aviation’s Rafale in 2012. 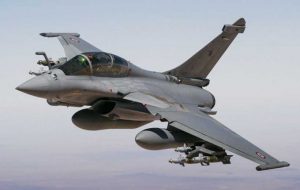 However, the deal fell apart over French concerns over liability for aircraft built in India and in 2015 the Indian government cancelled the contract. They have since ordered 36 Rafale off-the-shelf from France as a stopgap measure until a new fighter can be selected.

In April 2019 the IAF issued a requirement for 114 new aircraft to meet their requirements and the fierce competition has resumed. In the running are Lockheed’s F-21, Boeing’s F/A-18 Super Hornet, the Eurofighter Typhoon, Dassault’s Rafale, Saab’s Gripen and the MiG 35. All are keen to win the $18 billion contract and industry watchers can expect to see various ploys and offers made to woo the Indians.

Lockheed has hit the floor running. Their f-16IN model was quickly knocked out of the first competition and it seems the company has taken the lessons on board. They have offered their newest variant of the f-16, rebranded as the F-21, with the proviso that should they win the contract then they will not only set up a state-of-the-art manufacturing facility for the aircraft in India but allow the IAF exclusive rights to the model.

Though in essence an enhanced version of the F-16V, which is enjoying considerable sales success already, the F-21 features “…12,000 hours of service life air frame in F-21 versus 8,000 hours previously. The additional 40 percent weapons carrying capability is new in F-21 which was not there in F-16 Block 70. The electronic warfare system is uniquely developed for India,” according to Lall.

In what offers to be the defence deal of the decade, Lockheed has fired the first salvo. It remains to be seen what the competition has to offer in return.