When talking about upgrading programs for tanks, it normally revolves around modern MBTs that are getting the very latest in technological improvements. But the Vietnamese People’s Army – VPA for short – is implementing such a program to upgrade some very old tanks in order to keep them viable.

The VPA operate an estimated 850 T-54/55s and another 350 Type 59s, the Chinese-built copy. These tanks form the majority of the VPAs tank fleet and have seen a great deal of use. Though our image of the Vietnam War is often of infantry and helicopters, armour saw extensive use after the withdrawal of the majority of US forces.

In 1971, ’72 and in the final battles of the war in 1975, the T-54/55s were extremely active, with substantial armoured clashes occurring between the forces of North and South Vietnam. The tanks were also a key feature of Vietnam’s subsequent wars in Cambodia and against China in the late-1970s.

But, as the dates indicate, these tanks are getting on in age. Upgrades to the T-54/55 are hardly a new thing, with the Israeli’s developing the Tiran-series of updates about the same time as North Vietnamese tanks were battling their Southern counterparts. But the Vietnamese are the latest to initiate a program to keep these old battle wagons viable. 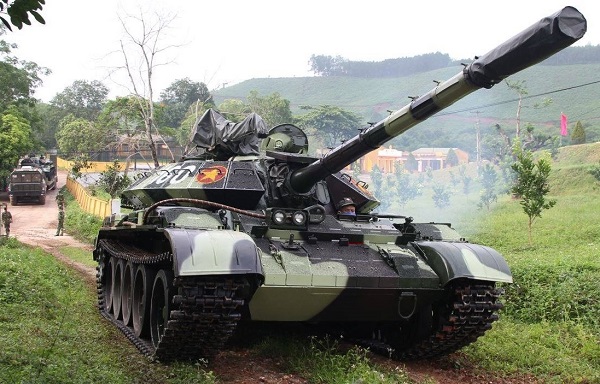 Designated as the T-54M, these tanks have seen major upgrade work. The primary change is in the fire control system. The T-54M has the old TPN night sight replaced with a Spanish-made Indra TIFCS-3BU. 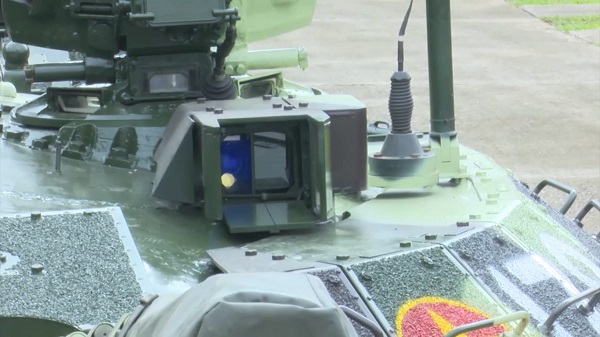 This provides automatic aiming, thermal imaging for night fighting and can be operated by the commander or gunner. In terms of improving combat effectiveness, this is without doubt the most important aspect on the T-54Ms.

The upgrade also reportedly sees the fitting of a new hydraulic power steering system. The T-54/55 is considered quite a nice tank to drive in comparison to many of its contemporaries from the 1950s, but no doubt this addition will be welcome to the VPA drivers. Some sources report the fitting of new engines, but that does not seem to be the case.

The old Model 55 diesel that is used in the T-54/55 is primitive in comparison to modern engines, but that is not necessarily a disadvantage. It is simple, robust and parts are easily made and available. Its retention would make sense, though perhaps upgraded to compensate for increased vehicle weight.

Visually, the biggest change is in the tank’s armour layout. The distinctive rounded turret is now covered with an applique protection system that adds considerable bulk. Smaller armour boxes are also fitted to the glacis plate.

Most sources state these are a form of Explosive Reactive Armour (ERA). This is possible, as retrofits of ERA are extremely common on tanks of the T-54/55 series.

But – and I will admit to not being an expert on armour technology – I am not so sure about the turret armour. While the smaller added armour boxes on the hull front do appear to be ERA, the bulk of the angled applique armour on the turret sides make me wonder if they are a passive composite armour instead.

It could be that the Vietnamese developed ERA – which would likely be designed with high-end Chinese missiles in mind – just needs to be that large to be effective against anticipated threat. But I would prefer more details, which are not likely to be forthcoming as the VPA is careful about what it releases on the T-54M.

Also added are a form of slat-and-chain armour on the turret rear, designed to detonate incoming anti-tank missiles. 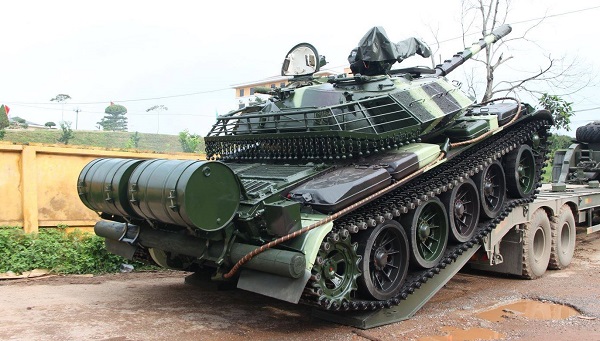 This sort of armour was used on the early Israeli Merkava tanks, and it probably comes as no surprise that the Israelis have played a major part in the program. Israeli Military Industries – now part of Elbit – were hired to develop the prototype for what would become the T-54M program.

This model, designated the T-54M3, was also fitted with a NATO-standard L7 105mm gun and a 60mm mortar – common features in Israeli upgrades to their own tanks based on their extensive experience of armoured warfare. 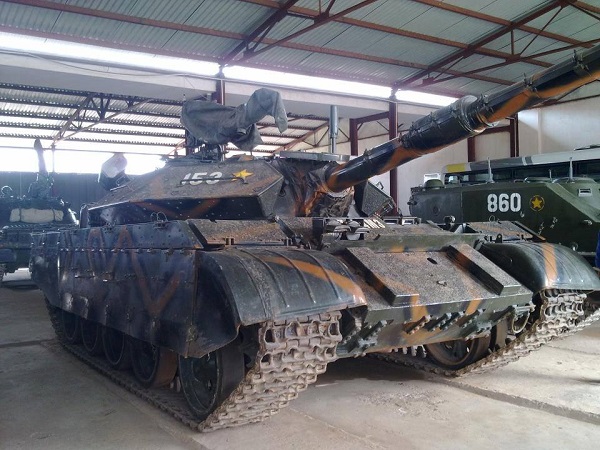 Interestingly, the VPA did not adopt these features. Instead, the T-54M upgrade retains the original D-10T 100mm cannon which dates from World War Two, though fitted with a thermal sleeve to provide better accuracy. The D-10 is generally looked down upon as inferior to the L7, primarily in terms of anti-armour performance.

But the decision to retain the 100mm makes sense. The VPA no doubt has vast stores of this ammunition in inventory, so bringing an entirely new weapon into service at this time would be hugely expensive.

Besides, the VPA has already selected its future tank, the Russian-built T-90, which is equipped with a much more powerful 125mm cannon. Though only about 60 of these are in service at the current time, the VPA does intend to make this vehicle its main MBT once funding is available.

So, it is likely that the T-54M will not be expected to provide the primary anti-armour capability of the VPA, this instead being the responsibility of the T-90 and infantry weapons. The T-54Ms are probably envisaged more likely in an infantry support role in the event of a war. For this the 100mm HE shell is perfectly adequate, and the guns armour piercing abilities are good enough for most potential foes.

The number of T-54Ms anticipated seems to bear this out. To date, it appears that one hundred sets of the new fire control systems have been purchased and have either been fitted or are in the process of being so. The VPA states that an additional two hundred sets are expected to be acquired in the future – for an anticipated total of 300 T-54Ms to be built.

The rest of the T-54/55s and Type 59 fleet are expected to be moved into reserve status as T-90s come into service. Though obsolescent, these will be replacing vehicles such as World War Two-era T-34s and Su-100s, as well as American vehicles captured from the South Vietnamese.

And so, they will provide an improvement to the VPA reserves but retain a lot of commonalities with front line equipment – something that makes eminent sense.