“Under Fire; An American Story” (1991) by Oliver L. North with William Novak 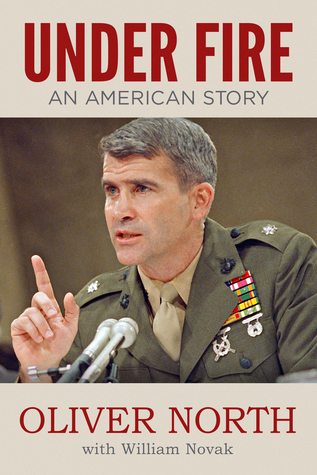 Foranyone who may not know, Lt. Col. Oliver North, USMC, was one of the most controversial figures of the late Cold War and continues to be a deeply polarising figure  – for some a traitor, for others a hero.

Col. North was instrumental in the Iran-Contra affair, where an illegal covert action run outside of the purview of the standard government procedures sold weapons to Iran and funnelled the proceeds to the anti-communist rebels in Nicaragua.

I will be the first to admit that I came to this book with a lot of preconceived notions and was recommended it by a friend who actually knows North personally.  Much of my attitude was in line with what I believe is the public consensus opinion on North; a rogue officer operating outside of the chain of command – basically the plot of a host of Hollywood movies.

But I found myself pleasantly surprised. North and Novak do a good job of detailing the nature of North’s job at the National Security Council, the politics and background to how Iran-Contra happened and on the personal emotions of North’s being fired and the subsequent congressional hearing into his conduct.

It must be remembered that North was assisted in the writing of this book by an extremely competent ghost writer. As a result much is made of his personal life and military career so as to make the reader identify with him, and the best possible spin is placed on North and his part in the affair. This is literally North’s public defence; he’s hardly going to throw himself under the proverbial bus.

What this book does for historians is give a personal account of the machinations of government in the late-20th century and of covert operations – less Machiavellian, more Walter Mitty. It also, somewhat understandably, shows the media industry in a less than favourable light.

The books real contribution is in detailing the intricacies of the Iran-Contra affair itself, from the players themselves to how the whole operation was conducted. This in itself is deeply interesting.

North’s consistent argument also rings true. He was, as he points out frequently, a mid-ranking officer in the Marine Corps seconded to the NSC. For him to organise, fund and run an covert operation on this scale without any authority from higher officials is, as he says, ridiculous. North’s belief that he was doing the correct thing, both in regard to America’s interests and in honouring the debts owed to the Nicaraguan resistance also seems deeply sincere.

Under Fire is, as pointed out, North’s final defence of his actions. But for those interested in the Cold War, intelligence or American politics, it’s a good read for picking out a better understanding of those issues.

At the time of writing Under Fire is available at Amazon for $13.70.