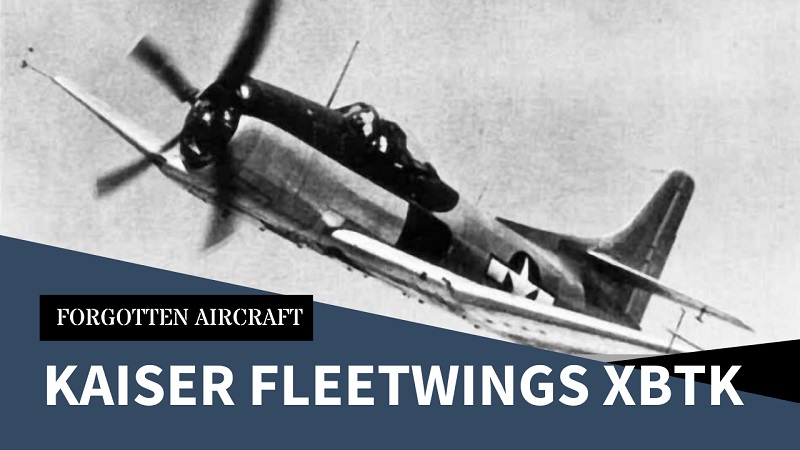 If you have read my previous article on the Martin Mauler you’ll remember how I wrote that the US Navy had in 1943 asked four companies to design their new all-purpose carrier attack aircraft.

The list was a veritable who’s who of American aero designers. Apart from Martin, you had Douglas, who produced the famous A-1 Skyraider for the requirement. You had Curtiss who though their design, the XBTC, proved a failure this is largely attributed to the fact that the company had more than enough work already. And, of course, you had Kaiser-Fleetwings.

You know, Kaiser-Fleetwings, you’ve heard of them, right?

Fleetwings were a small to mid-sized aero company that originally set up in 1929. They focussed predominantly on manufacturing parts for other companies but did a handful of their own designs before the war, normally trainer aircraft and amphibians.

Of course, the Second World War meant they had plenty of work as subcontractors, but the company definitely had hopes of building their own aircraft. And then in 1943 they were bought by Kaiser Industries.

Now, I suspect you have heard of them, but if you haven’t it’s probably because they were one of those vast mega-corporations that built…just about everything. In terms of World War Two, they are probably best known for their building of the Liberty-class transport ships.

With their purchase of Fleetwings – subsequently renamed Kaiser-Fleetwings – they were making a move into aeronautics. And so, the US Navy chose them to be one of the four competitors for the new attack aircraft.

A company that had never built a combat aircraft. Or a carrier aircraft. Or, indeed, any aircraft in anything like major serial production.

It is tempting to look at some of the US Naval aircraft purchasing decisions and think that sometimes they just felt that should go for the…less obvious option. I mean, just look at the Brewster Buffalo!

But to be fair, the choice to engage Kaiser-Fleetwings makes some sense. After all, the existing companies all had vast amounts of work already. As said, the Curtiss design didn’t get anywhere largely because the company was already fully engaged.

Martin managed to produce the prototype Mauler in an amazingly short time, but that is largely attributed to their design team just finishing up work on the B-26 bomber. But that company too was extremely busy building their existing designs, as was Douglas.

So, the US Navy’s idea of using a new company, one that did have spare capacity, does make a lot of sense. Plus, this was Kaiser, a company that had a vast amount of management knowledge involving large scale design and production projects.

Initially, the US Navy wanted a new dive-bomber primarily for use on escort carriers, and in February 1944 an order for two prototypes, designated the XBK, was placed. Obviously, with little prior experience in building combat aircraft, things progressed gradually, and in late-44 there was a slight hitch when the Navy decided they needed it to use aerial torpedoes as well. However, by March 1945 the first of the prototypes was completed. 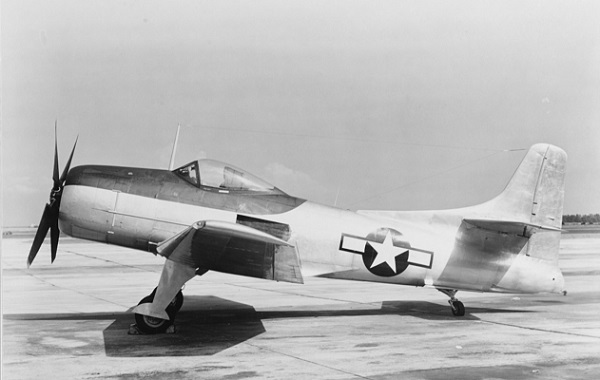 Now designated the XBTK, the aircraft was powered by a Pratt & Whitney Double Wasp radial engine, initially the 22W model but soon upgraded to the 34. This produced 2,100hp and gave the aircraft a top speed in later testing of 373 mph.

The XBTK had a neat appearance, rather like the A-1 Skyraider that was built to a similar specification, but it did have some unique features. The engine exhaust was vented behind the cockpit, which was hoped would provide extra thrust and decrease drag altogether. 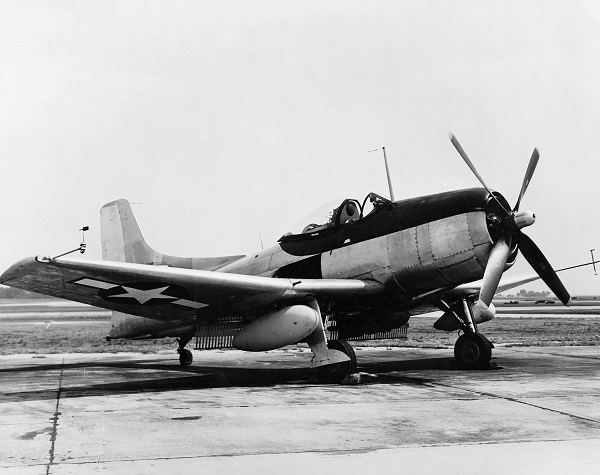 Weapons load was two 20mm cannon and four thousand pounds of bombs or torpedoes on three hardpoints, plus launchers for sixteen rockets.

First flight occurred on April 12, 1945 and there were some issues that needed to be resolved, as expected in any new aircraft. The US Navy increased orders to twenty pre-production aircraft and the first of these was handed over in August 1945 – just before the end of the war.

Orders were immediately cut to ten aircraft and testing revealed a few issues. The odd engine exhaust actually provided no real benefit to performance, and actually overheated the cockpit and made it tricky to get out of the plane. Stall performance was also reported to be poor, but the test pilots reported that in the dive the XBTK was better than any other aircraft either in service or in testing, which is a pretty impressive feat.

Again, redesign work commenced, which pretty much solved the stall issues, but it was apparent that the aircraft wasn’t really needed. Both the Martin Mauler and the Douglas Skyraider were in advanced development and seemed to hold greater promise.

In May 1946 the order was reduced to completion of the five aircraft under construction, and then in September the Navy finally pulled the plug and scrapped the lot. Which is a shame, because the XBTK was a remarkable aircraft.

Despite my earlier jokes about both the US Navy’s procurement decisions and Kaiser-Fleetwings, together they produced an aircraft that would probably have shaped up to be a solid performer with a bit more development. Considering its initial design parameters, a dive bomber for operating off small escort carriers, it certainly would have been a competent addition to the fleet.

Though it suffered from some issues, its development timeline broadly matched that of the Douglas Skyraider and surpassed that of the Mauler – not bad for a first-time effort on an aircraft that was intended to operate at the extremes of performance required for dive bombing.

If the atomic bomb had not been dropped, and the invasion of Japan had been required, it is entirely probable that the XBTK would have been a major type in use in 1946. And then we wouldn’t all be scratching our heads when someone says “Kaiser-Fleetwings.”