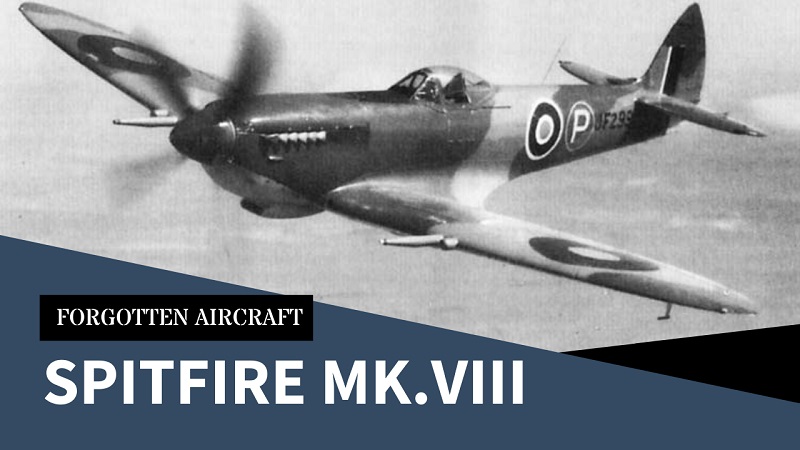 The Spitfire Mk.VIII is an aircraft that by most standards would be considered a success, but by Spitfire standards is the black sheep cousin. What is most remarkable is that the Mk.VIII was an excellent aircraft.

Supermarine’s Chief Test pilot Jeffrey Quill (so probably the best qualified person to hold an opinion on the subject) said that he considered the Mark VIII with standard wingtips to be the best of all the various marks of Spitfire from a flying point of view.

In fact, this model had been intended to be the standard service fighter of the entire RAF but was overtaken by circumstances.

Despite the good performance of the early Spitfires during the Battle of Britain, the British understood that they were in a race to maintain fighter parity – or better, supremacy – over the Germans. They therefore began looking at making improvements to the design, particularly in streamlining.

But the demands of war meant that apart from some development work on the one-and-only Mark.III Spitfire, little came of this and emphasis was placed in getting the newer and more powerful versions of the Merlin engine into the existing airframes.

This ultimately led to the Spitfire Mk.V, the most prolific version, with 6,479 being built. 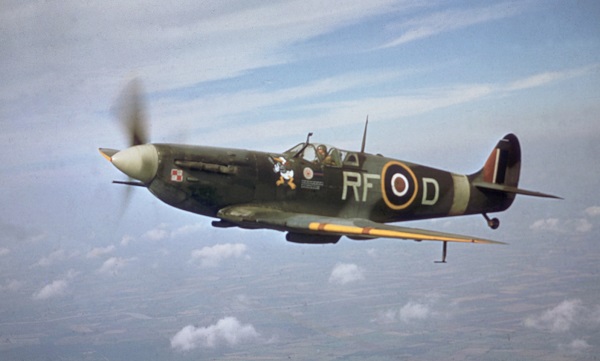 Pretty much just a MK.I or II Spitfire with a Merlin 45 engine the Mk.V provided sterling service from its introduction in early-1941. But the RAF still wanted to get a properly updated version of the Spitfire designed and into service, one which didn’t just have a further uprated engine but also features that would further improve the type’s performance.

Work resumed on creating this next version of the Spitfire, now planned to use the Merlin 61 as its powerplant. This featured a two-stage supercharger which improved its performance at high altitude by around 50% as compared to the ’45.

Supermarine also planned several other improvements on what was to become the Mk. VIII, meaning the new aircraft would be of stronger construction and have features such as a retracting tailwheel, increased fuel load and improved cruising abilities. 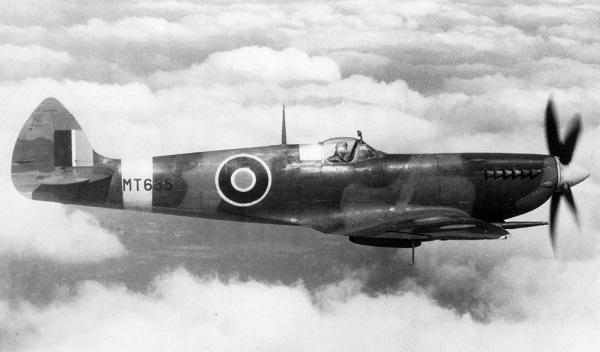 With the war now taking place in theatres far from North West Europe, the Mk.VIII would also be fitted with a Vokes air filter for the engine as standard – a wise idea as it would turn out. Design work continued through 1941 and it was expected that the new Spitfire would enter service in 1942 and allow the phasing out of the Mk.Vs.

Unfortunately, the Germans had also been developing a new fighter and this sent a shockwave through Fighter Command when it first engaged RAF Spitfires over France in late-1941; the FW 190.

This aircraft was demonstrably superior to the Mk.V, and led to a crisis in November after the new German fighters tore up the Spitfire escort of a bombing raid on Lille. RAF operations over France had to be suspended until a counter could be developed, and this is what resigned the MK.VIII to becoming a fringe model of Spitfire – comparatively speaking.

Deploying the same methodology as had created the Mk.V, Supermarine hastily developed the Mk.IX Spitfire.

This once again used the old fuselage, a slightly modified Mk.VC, and bolted in the Merlin 61 intended for the Mk.VIII.

First flying on February 26, 1942, the Mark. IX was a great success and, because production could largely be done on the existing factory lines with minimal disruption, the type was in full production by June 1942 and entered service the following month. Although it had been intended as a stop gap measure, the MK.IX became the next generation of Spitfire, and the Mk.VIII was largely surplus to requirements.

However, because the aircraft had been designed with the thought that the RAF and allies would need to fight in hot and dusty climates, the Mk.VIII actually found a niche as an overseas fighter in some of the distant campaigns of the Second World War. Here it would really show just how capable a fighter it was.

Three major versions of the Spitfire VIII were built; the F-model using the Merlin 61 was the standard fighter variant. There was also the LF for low and medium altitude combat, which was the most produced version and used the Merlin 66, and the HF (high altitude fighter) which used the Merlin 70.

All of these engines produced over 1,700 hp, although at different altitudes, and the MK.VIIIs top speed was rated at between 404 and 416 mph, again depending on the type and altitude.

Armament was fitted in the universal wing that had been adopted on the Mk.V and allowed the carriage of either four 20mm cannon or two cannon and four .303 Browning machine guns. 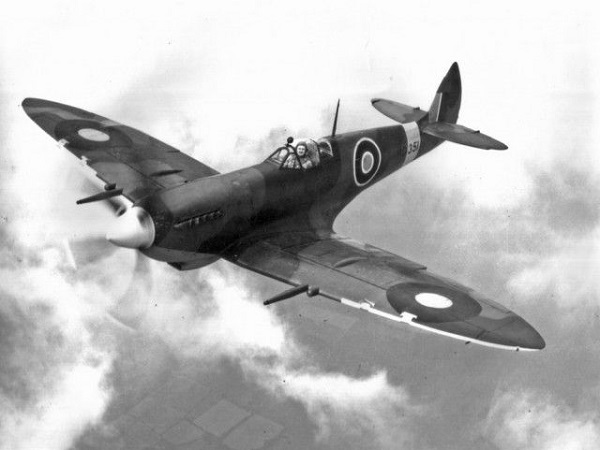 The Mark.VIII was able to carry an external bombload of a single 500 lb bomb on the centreline and a single 250 lb under each wing, for a total bombload of 1000lbs. 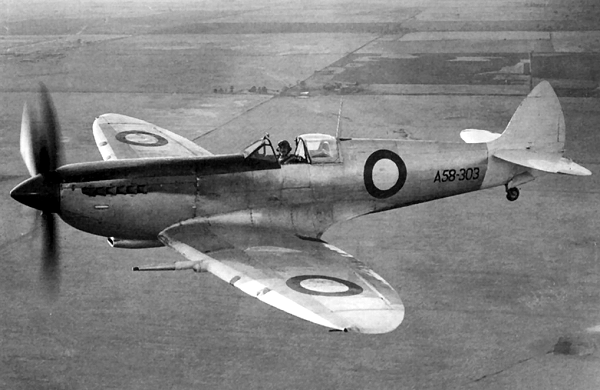 The features of the Mark. VIII also set the standard for following models of the Spitfire, and one aircraft – JF299 –  used to test a new cut-down rear fuselage and tear-drop canopy that would become standard on later marks. 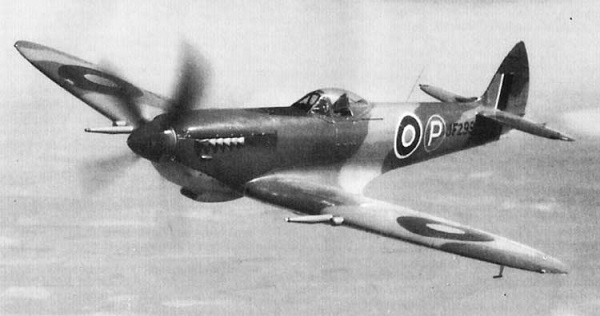 Unfortunately, because of the panic to get the Mk.IX into service to deal with the FW 190s in Europe, fielding of the Mark.VIIIs was slow to begin with. Although the first production model was completed in November 1942, it took until June 1943 for the first squadron to be equipped with the Mk.VIII – almost a year after the Mk.IX.

Deployed to the Mediterranean initially, the Mk.VIIIs saw use during the invasion of Sicily and the subsequent campaigns in Italy and Southern France. One of the aircraft’s principal users here was the Unites States Army Air Force (USAAF).

Suffice to say, the Spitfire Mk.VIII was lethal, a substantial improvement on the Mk.Vs that had been holding the line and which were starting to be outclassed by not just better German fighters, but Italian ones too. The Mark. VIII was up to the challenge, and the type would fight throughout the rest of the war in Southern Europe and proved an excellent fighter aircraft.

But it was in the Far East where the aircraft would really make its mark, beginning to equip squadrons in eastern India towards the end of 1943. This proved extremely fortunate timing as in March 1944, the Japanese launched their attack aimed at destroying the Indian and British armies in the country and opening a route for a full invasion.

Key to the British counter was the ability to supply units cut off by the Japanese by air to keep them in the fight. Naturally, air superiority was a key factor, and the Spitfire Mk.VIII was the perfect aircraft for the job.

The Mk.V Spitfire had been a fair match for the primary Japanese Army fighters in the theatre, the Nakijima Ki-43 “Oscar” and Ki-44 “Tojo”, but with few real advantages.

As a result, Indian, British and Commonwealth pilots had gone through a similar process as the US Navy had in learning specific tactics to get the best from their aircraft when it came to fighting the Japanese.

Just as the Americans found their methods became much more effective when they transitioned from the F4 Wildcat to the more powerful F6 Hellcat, the Spitfire pilots found that with the new aircraft they were able to sweep the skies.

As a result, the Mark. VIII played a role in allowing the Allies to keep their units supplied by air, grinding down and eventually crushing the Japanese offensive by August and beginning their own offensive into Burma.

The Mk.VIII would also prove a boon to the Royal Australian Air Force in defending northern Australia and in the hard fighting in the South West Pacific. Since February 1942, cities and towns in northern Australia had been subjected to periodic attacks by Japanese Army and Navy bombers, often escorted by the fearsome Mitsubishi A6M “Zero” fighter. 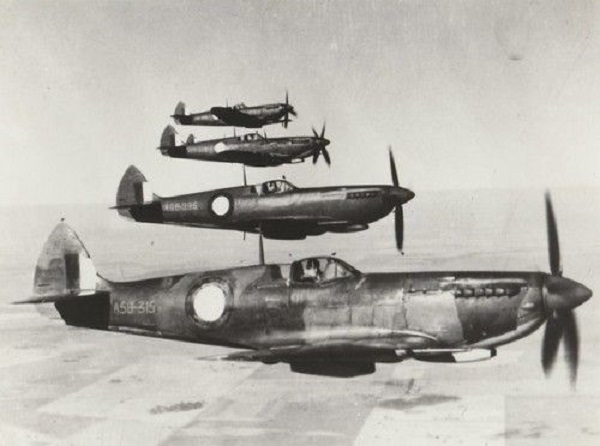 The Spitfire Mk. V had become the main fighter defender of the RAAF against these, and again the Australians had learnt, like Allied pilots flying other types, that you had to be careful to fight with the right tactics against the Zero, expensive lessons paid for in aircraft and pilots. These would pay off when the conversion of squadrons to the Mark. VIII began in April 1944.

Though by this point the Japanese attacks on Australia had ceased, the RAAF Mk.VIIIs were initially assigned to the defence of Darwin, and then soon found themselves deployed to the Dutch East Indies. Here the lack of opposition soon saw them used as ground attack aircraft.

Despite the development of later-model Spitfires equipped with Griffon engines and other newer fighters, the Mk.VIIIs stayed a viable frontline fighter against opponents across the globe, right up until the end of the war.

Yet despite this, they don’t seem to get the same sort of attention as their fellow Spits, probably because it fought mainly in the theatres that were monikered “the Forgotten Wars” by the soldiers who campaigned in them.

And that isn’t fair, either to the aircraft, nor to the participants, who both deserve recognition for the contribution they made. In reality, the Mk.VIII was the third most produced model of Spitfire, with a total of 1,658 built – hardly insignificant.

But compared to the Mk.Vs nearly six-and-a -half thousand and the Mk.IXs more than 4000 aircraft built, it is a comparatively small number.

Which is ironic, because but for the appearance of the FW 190 and the subsequent rapid and highly successful development of the Mark.IX, the Mark.VIII would likely have been built in vast numbers as THE standard British fighter aircraft from 1942 until early 1945.

So I think it fair to say that the Spitfire Mk.VIII is, paradoxically, probably the most successful “might-have-been” aircraft to have existed.