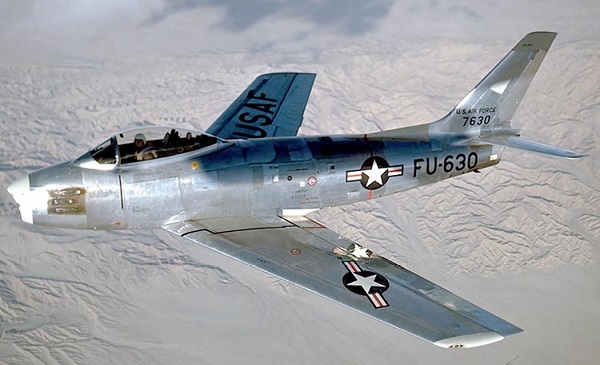 First flying in 1947, it was arguably the best of the first-generation jet fighters, with the Soviet MiG-15 being the main rival for the claim. These two aircraft famously fought one another in duels throughout the Korean War and the Sabre was to prove such a stalwart that it would continue in front line service until 1994.

But the Sabre, in common with many of the early jets, had a serious flaw – its range.

For the US Air Force, committed to a policy of strategic and nuclear bombing in the immediate Second World War era, this was a problem. Their bomber fleet was principally made up of B-29s, B-50s and the newly arriving B-45 Tornado, all of which were expected to be conducting long-range missions. This problem would only get worse once the projected Northrop B-35 Flying Wing and Convair B-36 got into service with their trans-Continental ranges. 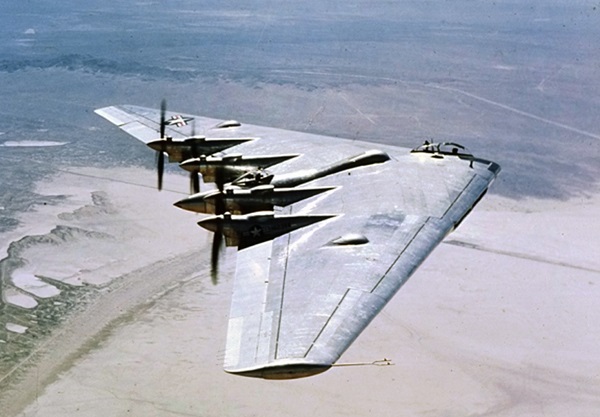 Experience from the war had taught the USAF that really, they needed escort fighters for their bombers to ensure they got through to their targets, but with their limited range the new jets couldn’t provide that. A range of experiments were developed to try to remedy this situation.

First, and even before the end of the War, there were attempts to build dual-powered aircraft such as the Ryan XF2R Dark Shark and the Consolidated Vultee XP-81, which combined a turbojet for speed with a turboprop for range. 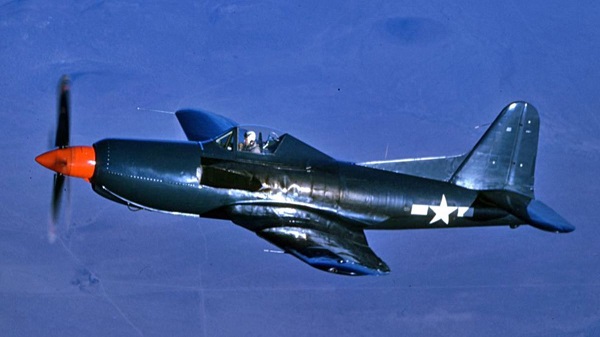 This was followed by proposals to build bigger jets that could carry enough fuel, such as the Bell XP-83 and even the resurrection of the concept for bombers to carry their own “parasite fighter”, typified by the XF-85 Goblin. But none of these were suitable, generally having far inferior performance to any expected opposition.

In 1946 the USAAF (as it still was then) was deeply concerned about the issue and requested that a new “penetration fighter” be built for their requirements. This would be a long-range fighter with a combat radius of at least 900 miles (c.1,450km) and be capable of going toe to toe with opposing jets. In essence, a jet P-51.

The requirement pushed what was feasible, and only two companies fielded proposals; McDonnell with their XF-88 Voodoo and Lockheed with the XF-90. To carry the fuel required, both aircraft were large, twin-engine affairs but that was the necessary trade off and both types had prototypes ordered for testing.

But North American was also looking closely at the USAF’s penetration fighter requirement, and they thought that they could win the contract. In late 1947 they proposed a version of what was then the newest and most capable fighter then undergoing development for the USAF – the F-86A Sabre (or P-86, as it was designated at the time).

Now, as I’ve already said, the Sabre doesn’t seem a very good match for the specification. The F-86 was a small, single-engine day fighter built for performance rather than range. 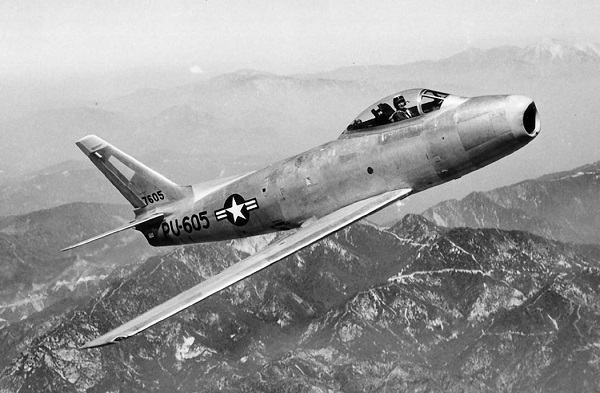 But in fact, North American were to offer a radical update to the basic design, which meant that though they initially designated the aircraft as the F-86C, it was quickly going to be recognised as an aircraft in its own right and be redesignated as the YF-93A.

From the Sabre, the YF-93 retained the wing and tail assembly, but that was about it. The fuselage was substantially larger, which was needed to carry the extra fuel for the aircraft’s primary mission as a long-range escort fighter. In fact, the theoretical range of the YF-93 with drop tanks was over two thousand miles (c.3,220km), around twice that of the early F-86.

The extra loading in turn required a more powerful engine and the original J47 of the early F-86A, which produced 4,850lbf, was replaced with a Pratt & Whitney J48. This was a licence version of the British Tay engine and produced 8,000lbf with afterburner. 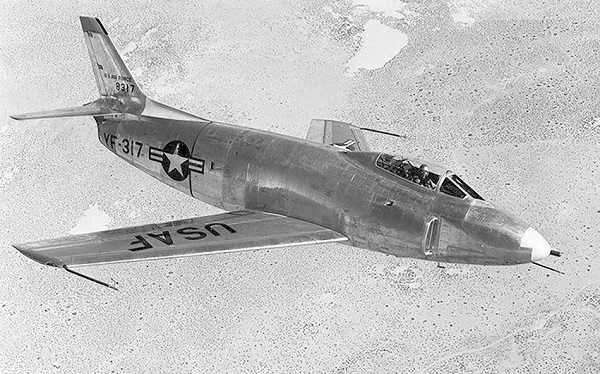 Armament of the YF-93 was also more formidable than its forebear, with the Sabre’s six 0.5-calibre Browning heavy machine guns switched out for six 20mm cannon.

But the most notable change was to the aircraft’s nose. Instead of using the open inlet like the Sabre, the YF-93 relocated the air inlets to the fuselage sides, with the nose used to accommodate an SCR-720 interception radar.

The inlets were of NACA duct design, intended to provide a more efficient and streamlined air intake than scoop intakes that were more common. 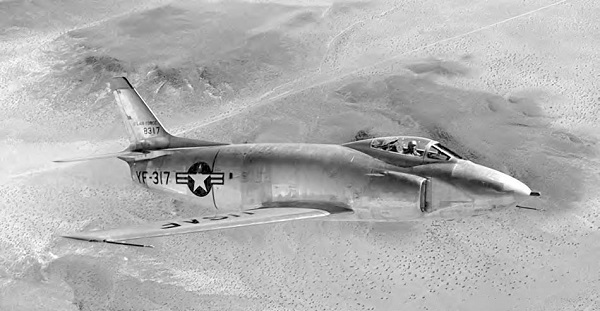 All this meant the aircraft’s weight was much heavier than the Sabre, and the landing gear also was beefed up to compensate, using twin-wheels for the main gear rather than singles as the F-86.

In December 1947 the USAF ordered two prototypes and then, in June 1948 added orders for 118 production aircraft. Apparently, the Air Force favoured the design because of its commonality with the Sabre, but in contrast to that they then acknowledged that the aircraft was so far removed from the original Sabre that it got the afore-mentioned change of designation.

Regardless, things looked good for the F-93A’s prospects.

But just as suddenly as the decision to buy was made, so was the decision to cancel. In February 1949 the USAF dropped its requirement for a penetration fighter. This was attributed to a large cut in the military budget, but also that the USAF was planning to soon induct the new Boeing B-47 Stratojet into service. 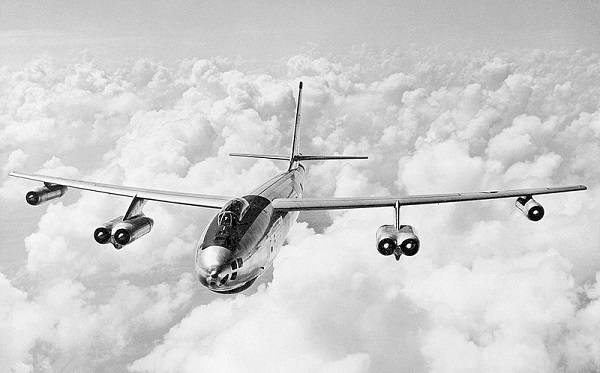 This, and the even more ambitious follow-up design, the projected B-52, would fly too high and too fast for enemy interceptors, rendering the need for escorts unnecessary…or so was thought at the time.

However, though officially not needing penetration fighters anymore and cancelling the production contract, the USAF still had orders in for prototypes for the three selected designs, and so the program continued in a more low-key – and arguably more sensible – fashion.

As a result, the YF-93 first flew in January 1950 and they appear to have proven to be solid aircraft. Top speed recorded was 708mph (1,140km/h), the expected range requirements were met and both aircraft flew with few problems, from what limited information is available.

The one issue that seems to have arisen was in the use of the NACA inlet ducts. Though intended to improve performance due to better streamlining, in fact in high angles of attack the air flow to the engine was disrupted and scoop inlets were considered superior for air combat.

As it was, this turned out to be largely irrelevant to any hopes for an actual production order. In the summer of 1950, the USAF conducted a flyoff amongst the three competing designs to see which was best.

And the McDonnell XF-88 won. 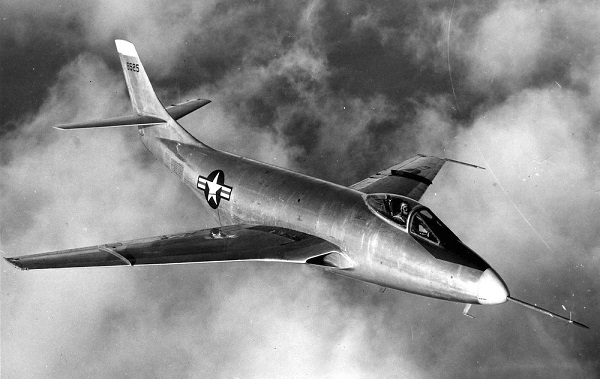 This still meant nothing, as the war in Korea was now raging. Though their military budget had been much restored by the conflict, the USAF was fully committed to buying aircraft for use in combat and that did not require any of these aircraft.

The specification was shelved, though the XF-88 would see further development to eventually become the F-101 Voodoo.

But the YF-93 was very much surplus to requirements. However, the two aircraft built did prove useful. They were given to the NACA for further testing before being used as chase aircraft for the new fighters and bombers then under development, the “Century-series”, which would start to come into service from the mid-1950s.

Having successfully performed this one duty, both YF-93s would finally be phased out in the late-50s and subsequently be scrapped.

How Northrop Grew its Teeth; The N-102 Fang