With the coming of the jet age the size and expense of aircraft carriers and the aeroplanes that flew off them exploded. When the USS Enterprise (CV-6) commissioned in 1938, she had been designed to fly biplanes, displaced 25,500 tonnes and measured 809 feet in length. When she was taken out of service a mere nine years later, she was replaced by the USS Coral Sea (CV-43), which dwarfed her at 45,000 tonnes displacement and 968 ft in length.

The Coral Sea would in turn be overshadowed in 1961 by the Enterprise’s namesake – CVN-65 – which on top of being nuclear powered displaced 95,000 tonnes and measured just short of 1,100 feet long.

This growth meant that no country other than the United States could afford to operate first-class carriers in any real numbers. That was a problem that the Soviet Union, pitted in a battle for supremacy against the US and the West, really wanted to solve.

What the Soviets needed was a way to build smaller, less expensive carriers that could fly aircraft sophisticated enough to offer something worthwhile. And one technology seemed to offer that.

Vertical Take-Off and Landing – or VTOL for short.

In terms of how this effects aircraft carriers, it allows them to be built much smaller and lighter and dispense with complicated and expensive machinery like catapults that conventional carriers need to operate their aircraft. 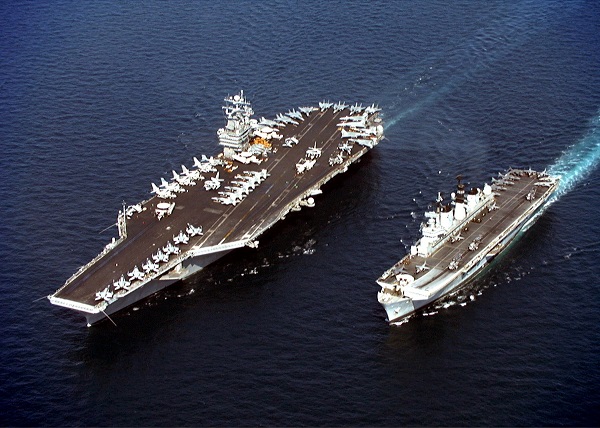 *US Carrier Sails with a Royal Navy “Harrier Carrier”. By using the VTOL capable Harrier, the RN carriers were able to be built much smaller than their conventional equivalents. The trade off was in aircraft performance and capability. The Yak-41 would have off set this penalty considerably

And this principle definitely had possibilities. During the Falklands War of 1982, the British Sea Harriers, a VTOL-capable design, proved a useful air defence asset in protecting the Royal Navy’s ships.

Like the British, the Soviets were early appreciators of the potential of VTOL aircraft, especially in a naval application. The Yakovlev design bureau were to be the Russian’s main explorer of fighter designs featuring this flight method. Conducting development work throughout the 1960s, they would develop a VTOL fighter that went into service with the Soviet Navy in 1976 – the Yak-38, NATO designation “Forger”. 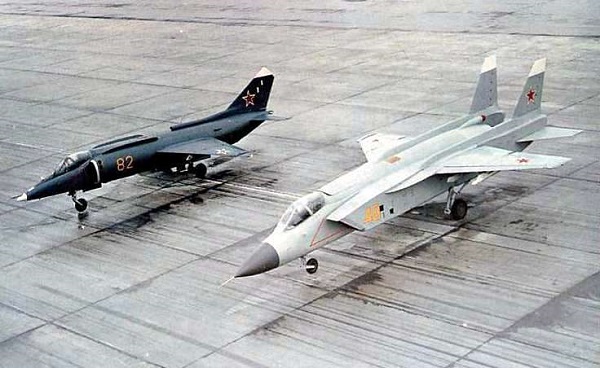 Yak-38 alongside its expected successor – the Yak-41. The mere look at the two shows the -41 to be a much more formidable aircraft

Being the first carrier multirole aircraft to ever go into service with the Russians, the Yak-38 was very much a “proof-of-concept”. Broadly comparable to the British Harrier – and I say broadly because the -38 was by all accounts pretty useless – the aircraft had a lot of limitations, being only capable of transonic flight and carrying a couple of short-range heat seeking missiles.

In comparison to American naval aircraft in service at the time such as the extremely formidable F-14 Tomcat, it was a sitting duck.

What the Soviets really wanted was a VTOL aircraft capable of supersonic flight and a top-rate radar that would allow its carriers to be a much greater threat to NATO forces and enable the Soviets to project their power with naval forces much more effectively.

Design work began even as the Yak-38 was just coming into service and soon produced a quite remarkable aircraft. 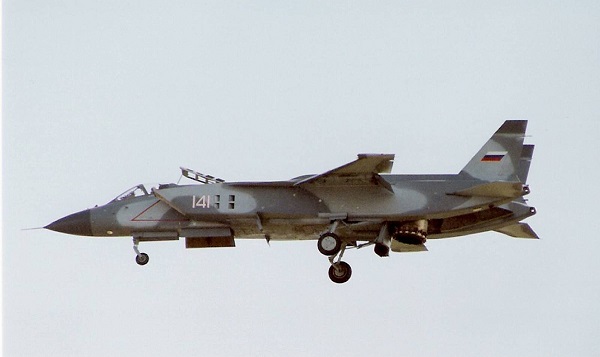 This aircraft was expected to be a vast improvement on its predecessor. Fitted with a single vectored-thrust R-79 turbofan capable of 35,000 lbs of thrust for propulsion and two smaller vertically-mounted RD-41s located behind the cockpit for take-off and landings, the Yak-41M – as the projected production model was designated – was expected to have been capable of Mach 1.5.

Engine Layout of the Yak-41

It was also planned to fit a modified version of the MiG-29s Zhuk radar and fire control system, enabling it use Beyond Visual Range-missiles like the R27. The Yak-41 would also be equipped with a six-barrelled 30mm cannon and four underwing hardpoints.

Though the aircraft would still have been inferior to the Tomcat, its ability to carry BVR-missiles and have reasonable flight performance would have made it a much more formidable opponent, and easily comparable to a lot of other fighter aircraft of the day.

Four prototypes were built, with the first flying in March 1987. The first VTOL landing and take-off from a ship occurred in September 1991, and one prototype was damaged a few days later in an accident, though fortunately the pilot was able to eject safely. 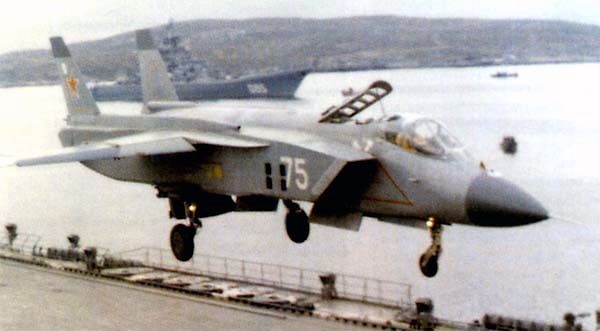 The Yaks would demonstrate excellent handling and agility during testing, and even go as far as to make an appearance at the Farnborough air show in the UK in 1992. But that event would very much mark the type’s swan song. Like many “what-if” aircraft, the Yak-41s were doomed by their timing – as well as a helpful push from competing Russian design bureaus.

Not wanting to put all their naval aviation eggs in the VTOL basket, the Soviets had initiated the construction of conventional carriers in the early 1980s, the Kuznetsoz-class. These were – and still are – capable of carrying modified versions of the MiG and Sukhoi aircraft in Russian service and as such made much of the need for a specialised VTOL fleet fighter like the Yak-41 redundant.

On top of that, the Cold War ended in 1990 and the Soviet Union itself dissolved at the end of 1991, leaving the Russians with far more pressing concerns and a practically non-existent defence budget. The Yak-41 program was therefore, and not very surprisingly, closed. Two of the remaining prototypes are currently on display at museums in Russia, and that would be that. 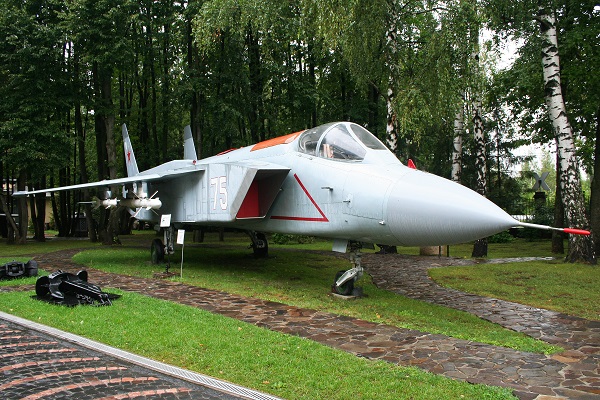 Though there is one intriguing footnote.

As I pointed out in my article on the American MA-31 drone, at the end of the Cold War several American defence manufacturers were very keen on working with their former opponents in the ex-Soviet Union. After all, these guys were often at the cutting edge of contemporary military technology and now desperate to earn cold hard cash.

One of these American defence giants, Lockheed, thought that the Yak-41 – or Yak-141 as they called it – was of quite a lot of interest. At the time Lockheed were developing their entrant for the Advanced Short Take-Off/Vertical Landing competition. This was intended to provide an advanced VTOL-capable aircraft to replace the Harriers in service with the US Marines and Royal Navy. 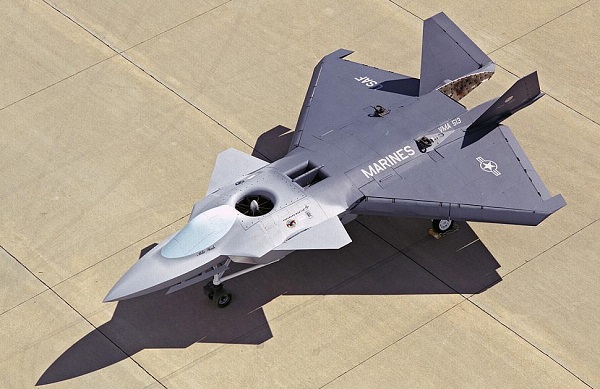 As a result, Lockheed purchased a lot of the technical information on the -41 from the Yakovlev bureau, particularly on the design of the swivelling jet engine nozzle and elements of the aerodynamic layout. This data helped Lockheed design their next generation aircraft, which was subsequently entered into the United States new Joint Strike Fighter competition in the 1990s – which they won. 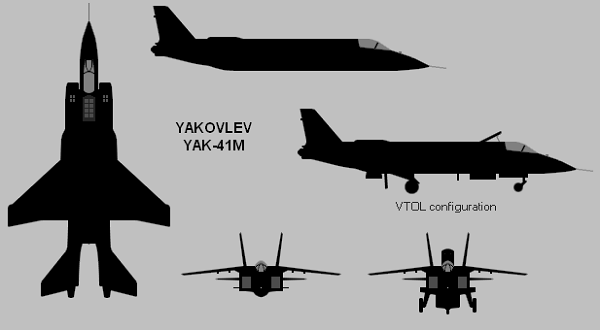 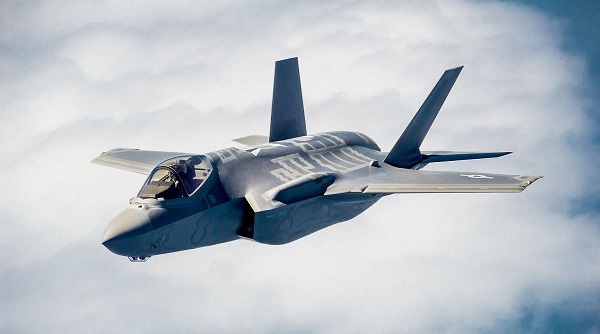 Now, it’s easy to look at the design similarities and say “Oh! It’s an American Yak-41!” That is hugely inaccurate, as the F-35 was the product of decades of research projects from multiple companies. But it is fair to say that the West’s foremost strike fighter, one that will see decades of service throughout the 21st century, has a good dollop of Soviet Yak-41 DNA in its make up.