If ever there a was a man who built some really odd-looking planes, it’s Geoffrey Terrence Roland Hill. Hill was an experienced combat and test pilot who fought during the First World War with the Royal Flying Corps.

Between 1925 and 1932, Hill, working alongside the aircraft builder Westland, developed a series of experimental tailless aircraft – the Pterodactyl’s. 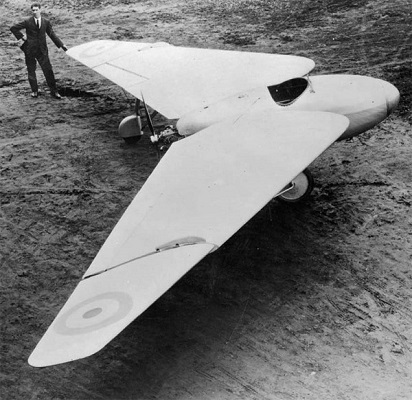 Hill understood that the aircraft of the day had some rather dangerous characteristics, especially in the stall, and he hoped to develop a new aircraft planform that would remove these issues and help protect the lives of pilots. It is the final one of these experimental aircraft that I want to look at here. 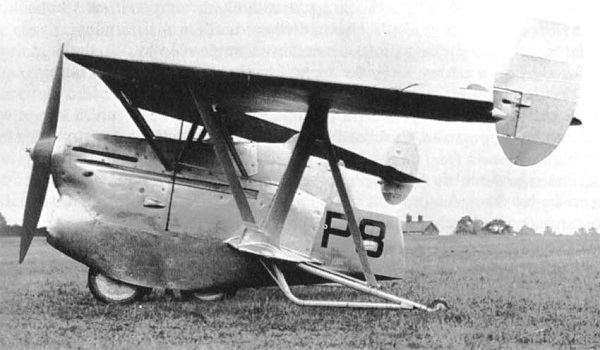 This was a direct result of the Westland-Hill partnership trying to make the new concept aircraft commercially viable. The Pterodactyl IV had been a three-seat monoplane intended for the civilian market. One was built, and it had proven to be a good aircraft.

But the IV had flown in 1931, a time when the world economy was not exactly in great shape. Consequently, there was not a lot of market for such an aircraft, and it never went into production. But there was one market that, though it did suffer from the crash, was always looking to buy at least some aircraft fairly consistently – the military.

So, Hill and his team at Westland decided to explore if they could build a cutting-edge fighter incorporating his ideas. The proposed aircraft would have high-performance and be a two-seater, as was a fairly common practice of the day, with both machine guns for the pilot firing forward and more mounted on a flexible position for the observer to protect the rear of the aircraft. Being a tailless design, this position would have an excellent field of fire. 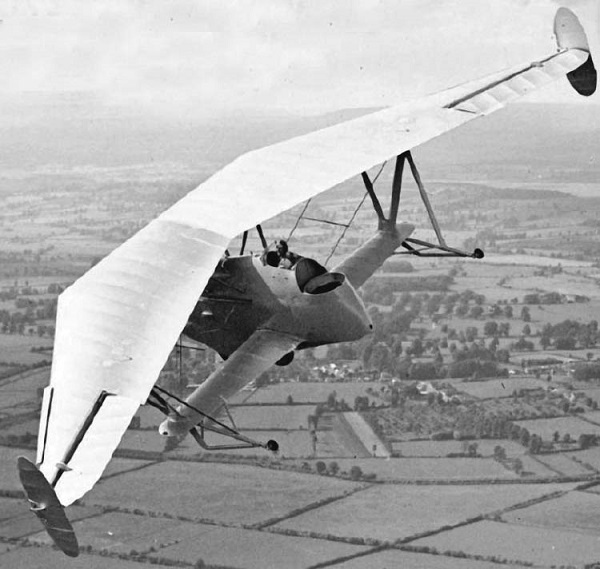 The proposal was put to the British Air Ministry, who were interested enough to draw up a specification and authorize development for a prototype. Work progressed extremely rapidly, and by the latter half of 1932 the aircraft was complete.

Because it was intended to be a fighter, and therefore needed to be capable of hard manoeuvring, the Pterodactyl V was built as an unequal-span biplane to provide it with greater strength. While the top wing was swept, the lower, smaller wing retained a straight profile. This also provided an anchoring point for the top wing and was projected to be capable of carrying 20-lb bombs for ground attack in service. 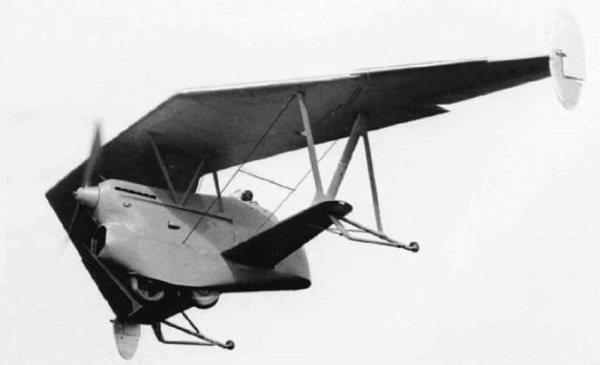 The lower wings also had the landing gear balancing struts attached to it, as the main gear was composed of two wheels housed inside the fuselage.

And speaking of the fuselage, you may have noticed it was rather short. With the vertical stabilizers mounted on the upper wing tips, thus removing the need for the tail, Westland evidently just decided that the fuselage was largely surplus to requirements.

In fact, the plane was only 20’ 6” long (6.24m) which meant that getting the engine, cooling system, fuel tank, control systems, weapons and two crew into it was a squeeze.

Armament was two fixed forward firing Vickers machine guns either side of the pilot, which fired through long chutes in the sides of the fuselage. The rear gun position was supposed to be fitted with an electrically powered turret of Hill’s own design which held either one or two Lewis machine guns, with sources disagreeing on which is correct. 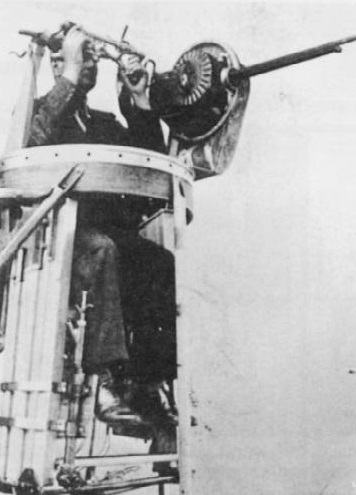 But as the turret never seems to have been fitted, and all photographs of the aircraft show the rear position open, it remains an unconfirmed detail.

As said, development and construction of the -V progressed fairly quickly during 1932 and taxi trials were undertaken in the autumn of that year. Unfortunately, the aircraft suffered a set back when the left wing collapsed. The Pterodactyl then had to return to Westland’s, where work to rectify the fault and strengthen the design further was undertaken.

At the same time, work was also done to improve the cooling system of the aircraft’s engine, which unfortunately was the Rolls Royce Goshawk. This experimental engine was all the rage with the British during the early 1930s, which is a shame because it was horribly unreliable and never was able to get made to work properly. Indeed, the limited testing conducted by the -V before its mishap showed that the Goshawk was problematic, and the cooling system needed reworking.

The changes took time, in fact more than building the original aircraft took, and it wasn’t until May 1934 that taxi trials were able to be completed and the aircraft was able to be sent to RAF Andover for flight tests. 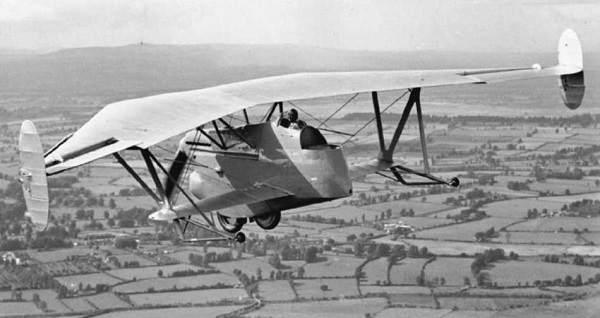 These showed that the aircraft had no apparent dangerous tendencies, despite its unorthodox design, but the engine was still problematic, and reworking of the condenser and the air intake were again required.

Continued flight testing found that the wings tended to flex in dives due to lack of torsional rigidity, which meant the outer portions of the wings also needed to be redesigned and strengthened. But testing also showed that the Pterodactyl V was, despite its compact design and powerful engine, not a particularly good performer.

Maximum speed was 165 mph (266km/h) which was about 20 mph slower than the RAF’s then current two-seater, the Hawker Hart.

Despite this, various tweaks continued to be made to the aircraft to address issues in its handling, and by the summer of 1935 it was thought ready to be put through its paces at the Royal Aircraft Establishment at Farnborough. Unfortunately, as the aircraft took off to head for the RAE the engine seized and the pilot had to make an emergency landing, though he did bring the aircraft down safely.

But the damage to the Goshawk was severe enough that it needed replacing and there simply wasn’t one available. Rolls Royce only built something like twenty of these engines and they were all in use with other development programs.

So, after some contemplation on what to do with the Pterodactyl V, in February 1936 the Director of Scientific Research at the Air Ministry ordered that no further flight testing or refinement should be carried out and that the aircraft would be sent to the RAE for future studies.

Westland shipped the aircraft to the Establishment, where it appears to have only survived for around a year before being decommissioned and ultimately scrapped.

This also ultimately meant the end of the Pterodactyl series. Hill had left Westland anyway in 1934 and taken a post as Professor of Mechanical Engineering at University College London.

Westland had plans for several follow-on Pterodactyl aircraft, with the VI envisaged to be a pusher version of the V with the turret mounted in the nose.

But ultimately the departure of Hill and then the cancellation of the Pterodactyl V marked the finish, and this line of rather interesting and odd prototypes and ideas came to an end.

Blackburn F.3; Didn’t Even Get Off the Ground