In early 1939 the United States Army Air Corps (USAAC) issued a request calling for proposals for a new twin-engined high altitude fighter. As the Lockheed P-38 Lightning, which would fulfil that very role, hadn’t even been ordered into production yet, that seems a bit abrupt!

However, the USAAC recognized the pace that military aviation technology was ripping along at and, with war clouds definitely on the horizon, evidently wanted to stay ahead of the game.

The favoured offering was, probably understandably, the Lockheed XP-49. This was essentially a supped-up version of the P-38 with more powerful engines and a pressurized cockpit. 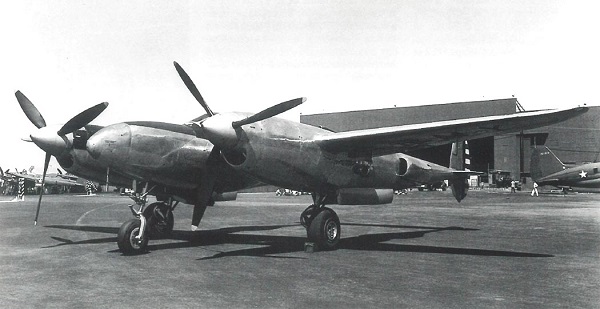 But that isn’t the aircraft we are going to look at today. Instead, let’s examine its primary competitor; an unusual option as the manufacturer, Grumman, was – and indeed still is – very much known for their specialization in naval aircraft.

The aircraft in question is the Grumman XP-50, and had things worked out differently, it may have been a mainstream aircraft that was well known today rather than a largely forgotten one. 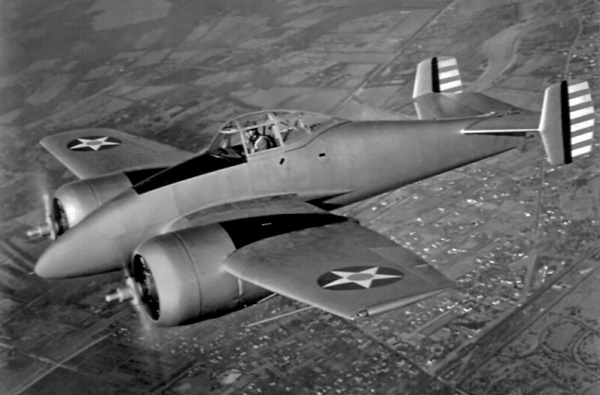 The origins of the XP-50 go back to an earlier and related design, the Grumman XF5F Skyrocket. This was originally built to a US Navy requirement for a lightweight, fast, hard-hitting carrier-based interceptor. 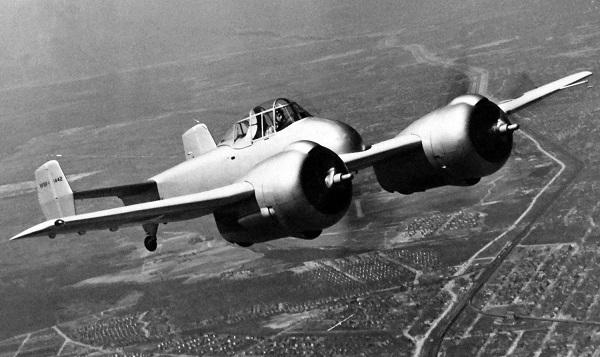 The promise that the XF5F showed caught the interest of the USAAC and when Grumman entered a proposal for a version of the aircraft for their use, the Army Air Force ordered a version modified for their specific requirements, with the intention that it would serve as a backup in the event of the failure of the XP-49. This new aircraft was company designated by Grumman as the G-45, and by the Air Corps as the XP-50. 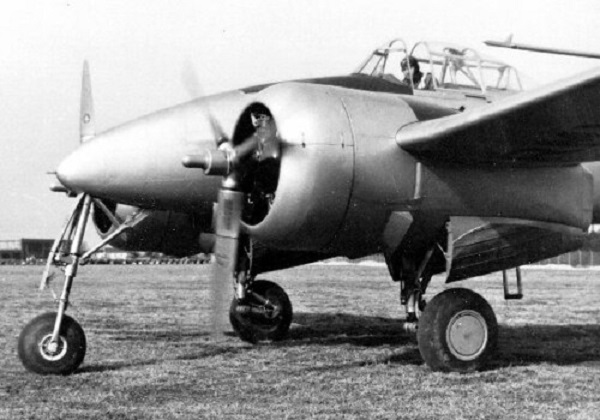 The nose was also intended to house the armament which, should the aircraft get into service, was to be two 20mm cannon and two 0.50-calibre Browning machine guns. Additionally wing racks were fitted for the carriage of two small bombs.

The two engines were also comparatively small for a combat aircraft of the time, being Wright R-1820 radials. These were 9-cylinder single-row engines, at a time when twin-row radials or water-cooled inline engines were largely becoming the standard fit for fighters, as well as pointing the way forward for more powerful engine development.

But to compensate for this the XP-50’s engines were fitted with turbosuperchargers to maximize their effectiveness at altitude. As a result, the engines produced 1,200hp each and, more importantly, delivered high power rates as they climbed.

In addition, the XP-50 was built with provision for the fitting of self-sealing fuel tanks and armour for the pilot, which was forward thinking as when the prototype was ordered in November 1939 the war in Europe was only a few months old and the proper lessons of modern air combat had still to be learnt. In fact, the order for the XP-50 was also only a few months after the actual production purchase of the P-38 was made, and a month after the XP-49’s.

Although the XP-50 was not a priority and Grumman had more than enough work on already meeting orders for existing aircraft from both the United States and export customers, the prototype was pretty quick in development and first flight was made in February 1941.

And the XP-50 appears to have been very good. 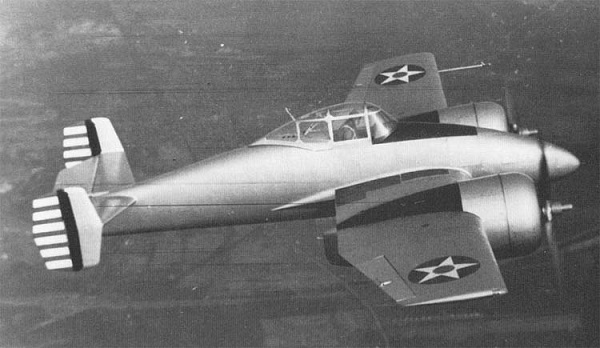 If the test pilots liked the previous XF5F, then apparently the XP-50 was even better, with excellent handling and performance. The aircraft proved extremely capable at altitude, as well as a nimble performer. Estimated top speed was 424mph (680km/h) and rate of climb was also exceptional at an estimated 4,000-5,000 feet per minute (1,220-1524 metres/minute).

Unfortunately the XP-50 was to suffer an early mishap. On the 14th May 1941, on its fifteenth test flight, one of the turbochargers exploded. The aircraft was severely damaged and the test pilot, Robert Hall, had to bail out.

The XP-50 subsequently crashed into Long Island Sound and was lost.

Hall was unhurt, probably fortunately as he was instrumental in helping to design some follow-on aircraft – Like the Hellcat, Bearcat, Panther, Cougar, Jaguar, Tiger…you may have heard of some of them.

But for the XP-50 program, the loss of the aircraft finished any hope for it seeing production, despite its promise. As said, it was intended as a backup for the XP-49, which incidentally wouldn’t fly until November 1942 and would prove to be a failure.

But for the USAAC that aircraft was the greater priority, and the XP-50 was largely irrelevant. They instead took the funding allocated for the XP-50 and invested in a joint project with the US Navy for a new Grumman aircraft, the G-65.

Though this project too would ultimately fall by the wayside, it laid the basis for a new aircraft, the F7F Tigercat, which was used by the US Navy and Marines.

It’s easy to use hindsight when it comes to military procurement decisions, but one must wonder what would have happened had the Army placed proper focus on the possibilities offered by the XP-50. It may have turned into a truly formidable fighter and interceptor.

But in reality, it probably wouldn’t have got a chance to show what it could do in service for two main reasons. Firstly, the USAAC was, as said, already using the P-38. 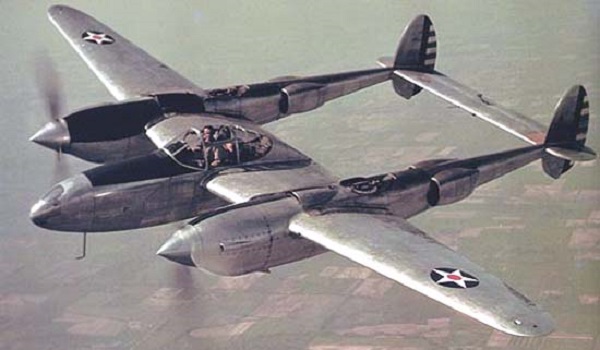 And that proved a very good aircraft all round and displayed plenty of scope for improvement throughout the war by adapting to new weapons and, perhaps most importantly, new engines.

Upgrading engines on an aircraft design is a complex process, which doesn’t guarantee success. The XP-50s use of the R-1820 would likely have meant that trying to use bigger, heavier and more powerful engines may have proven tricky, perhaps impossible. And that would have seen the aircraft gradually fall behind in potential performance against rival aircraft. 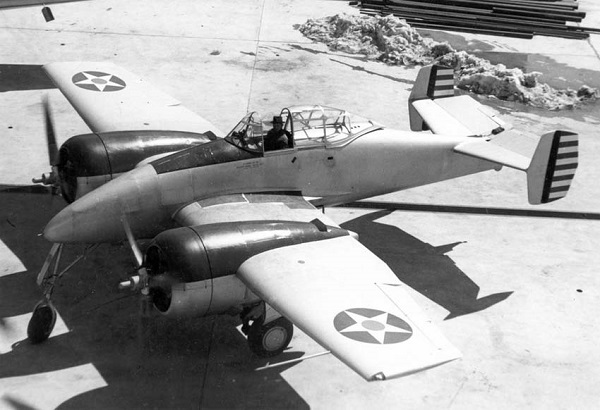 The other factor that must be remembered is that Grumman was, as said, the US Navy’s primary aircraft builder. Grumman’s capacity was a distinct concern and consuming that to build aircraft for the Army may not have proven popular, politic or necessarily the best choice in strategic terms.

So, the XP-50 probably only had the slightest chance of getting into service anyway, even if it hadn’t experienced the misfortune it did. But, having said all this it must be admitted that the XP-50 is one heck of a “what-if” aircraft.