When the name “Supermarine” comes up, it conjures immediately to mind the Spitfire, the company’s most successful and iconic aircraft. Of course, the Spitfire did not spring out of thin air, but was the evolution of Supermarine’s decades of work on cutting edge technology, plus backing from the huge Vickers-Armstrong company that bought Supermarine in 1928.

But the Spit was Supermarine’s first production land aircraft and represents a truly remarkable achievement. It is a pity that the company’s last production aircraft didn’t match the success of its famous ancestor. 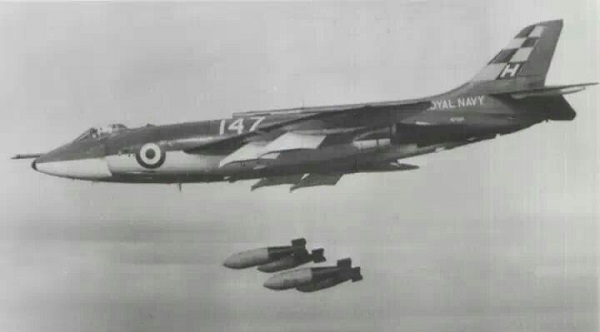 This single-seat carrier, nuclear-capable multirole fighter was the product of a rather complicated and lengthy development. This was, to be fair, caused by the fact that in the post-Second World War era, the Royal Navy was experimenting with several ideas on how aircraft carrier development was going to proceed.

The first trial landings of jet aircraft on British carriers in 1945 showed that as the technology matured, the existing carriers would struggle to manage a worthwhile number of aircraft. Ultimately the British would develop the angled flight deck and the steam catapult to tackle the issue and these largely became the standard on conventional aircraft carriers.

But in the late-1940s, the Royal Navy was giving serious thought to another idea. The sprung rubber deck carrier. The idea was that with reinforced undercarriages representing a significant proportion of carrier aircraft weight, better performance could be achieved if it just wasn’t included. In fact, it was calculated that designing aircraft without undercarriages could cut as much as 15% off their tonnage.

Carriers would be fitted with a special deck that would allow an aircraft to snag an arrestor wire and effectively have a controlled crash-landing. The idea worked – kind of – and Supermarine was directed to begin development of a new twin-engine fighter aircraft that could operate on this type of carrier deck.

This aircraft, the Vickers Supermarine 505, was rapidly supplanted in 1948 when the Royal Navy decided sprung decks were a bad idea and wanted the new aircraft to have an undercarriage after all. Supermarine promptly created the 508, which retained the V-tail and twin Avon engines of the 505, but now with a tricycle landing gear. The 508 prototype flew in 1951, with a second and improved version following in 1952.

This aircraft, designated the Vickers Supermarine 529, was fitted with the specified armament of four 30mm Aden cannon, as well as a longer tail cone that was intended to mount a rear-warning radar in service.

However, it had already long been recognised that straight wing jets were rapidly becoming obsolescent in first-rank use, and if the design were to have any future it would need to be redesigned to a swept wing design to give it transonic abilities. Another test aircraft was built, the Type 525, which not only had the new wing configuration, but also dispensed with the V-tail for a more conventional arrangement.

This first flew in April 1954 and showed considerably more promise than its straight wing predecessors. Flight tests and carrier landing trials showed the aircraft had potential, though it also revealed that the aircraft was not going to make a particularly good fighter as its performance fell off above 25,000 feet.

However, the 525 was able to test new technologies that reduced landing and stalling speeds and the twin Avon engines gave a huge amount of power. The aircraft was lost in a tragic accident in July 1955 that claimed the life of the test pilot, Lieutenant Commander Rickell.

Despite this the Royal Navy decided that, with the development of the new Sea Vixen interceptor proceeding, the Supermarine design would provide a great basis for a new carrier low-level multirole fighter. The new model was designated the Type 544 and featured a longer nose, dorsal spine, and area-ruled fuselage.

Three of these were built and they formed the basis of what became the Scimitar, the first production model of which flew on January 11, 1957.

The new aircraft was the heaviest, largest and most powerful aircraft that the Fleet Air Arm had used up to that point. This was amply demonstrated on April 9, 1956 when, during a test take off from the HMS Ark Royal, the pilot forgot to release the landing brake. Despite this, he still got airborne!

Initially powered by two Avon RA/24 turbojet engines that each produced 10,000 lbs of thrust, these were soon supplanted by more powerful Avon 202s that put out 11,250 lbs each. Top speed was 740 mph at sea level and range was 1,400 miles. Armament was four Aden with 160 rounds per gun and four wing hardpoints capable of carrying 1,000 lb each.

This may seem on the low side, but the Scimitar was also equipped to carry the “Red Beard” nuclear bomb. As the aircraft’s service life progressed it would also acquire the ability to carry Bullpup air-to-ground missiles and AIM-9 Sidewinder heat seekers.

But the advanced features of the Scimitar made it a mixed blessing. On the one hand, its ample power and advanced features meant that the aircraft had good handling, especially at lower altitudes, and many FAA pilots apparently were very keen to fly the new hot rod.

But while it proved in many ways a quantum leap in capability for the Royal Navy’s air groups, there was a substantial cost. The Scimitar was extremely maintenance heavy, hardly surprising for a new high technology aircraft, but it was so large and heavy that it was operating right at the very limits of what many of Britain’s carriers could handle.

This was all too graphically and dreadfully demonstrated when the very first operational Scimitar squadron landed on HMS Victorious on September 25, 1958.

The Victorious had just completed an eight-year, £30 million pound refit and was to be the first ship to take the Royal Navy’s latest and most advanced aircraft. As a result, the ship had a large contingent of press on board to document the event.

The commander of 803 Naval Air Squadron, Commander John Desmond Russell, made a textbook landing in his Scimitar. Then the arrestor wire broke.

Russell’s Scimitar rolled over the side and fell into the sea. Despite the best efforts of the rescue diver, he was unable to release himself from the aircraft and drowned.

This first incident gave an indication of how the service life of the Scimitar would pan out. Of a total of 76 production aircraft built, 39 were lost in accidents, a loss rate of 51% of all the aircraft produced. Nine pilots died in these accidents.

The service life of the Scimitar was short, like that of many of its contemporaries of the era. It never saw combat use, despite some close calls, and in 1963 it started to be replaced as the primary strike aircraft of the FAA by the Blackburn Buccaneer, an aircraft that was far superior.

Initially, the Scimitar served alongside its replacement as a tanker for the new strike aircraft, but with the introduction of the Buccaneer S.2, the Scimitar’s days were numbered. It served until 1969 (or ’70, depending on source) with its final duties being with the Fleet Requirement Unit providing practice targets for training radar operators. The remaining aircraft were scrapped, except for three that are retained in museums, two in the UK, one in the United States.

It is easy to look at the Scimitar, with a front-line service life of effectively five years and a horrendous loss record and think of it as a failure. But to be fair to the aircraft, it was breaking new ground in aircraft technology in one of the most dangerous of fields – carrier operations. It was also doing this on ships that were barely up to handling an aircraft as big and heavy as the Scimitar.

After all, the United States Navy had plenty of problems of their own with jets of this very same period, but at least had the advantage of ample resources available.

But the losses of the Scimitar would pay their dividends in the experience they gave the Royal Navy. This meant that as the service invested in the 1960s in even bigger and more complex aircraft like the Buccaneer and the F-4 Phantom, their crews had experience of aircraft operating at the limit of capacity that were a step up from the first-generation naval jet fighters.

So perhaps it isn’t fair to judge the Scimitar too harshly, despite its record.