During the Interwar period fighter aircraft designers were essentially faced with two choices when it came to what sort of piston engine they would fit to their creations.

The first was to use a liquid-cooled inline engine. These, generally V-12s, had the advantage of being compact and allowing an aircraft to be more streamlined, an important consideration when speed was a requirement.

However, they suffered from needing cooling systems and generally were heavier than the other option – the air-cooled radial engine. These had the advantages of lighter weight and generally simpler construction and maintenance requirements.

But radials tended to be bulky and not especially noted for their streamlining and so interwar fighters would be built with whichever engine fit suited the overall requirement. 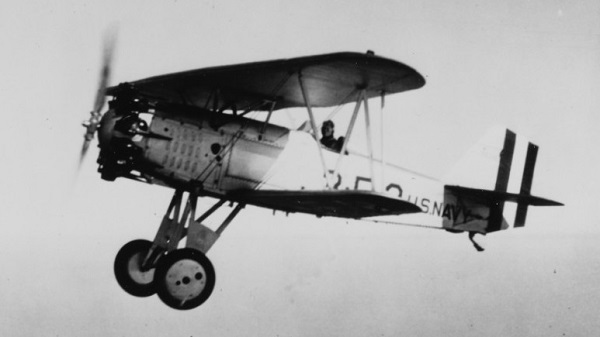 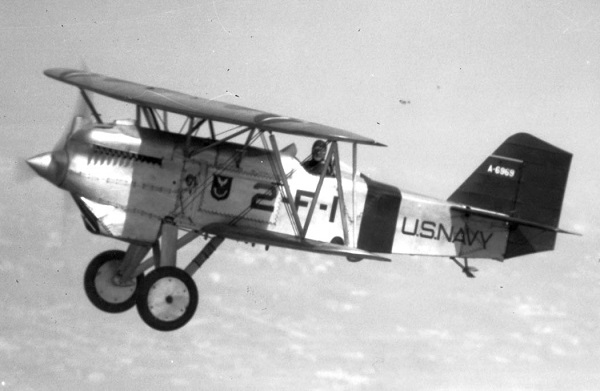 But both engine types generally had one disadvantage that needed to be compensated for with careful design – the fact that they placed a huge amount of the aircraft’s overall weight right out on the nose of the plane. And though a nose mounting was basically the universal standard when it came to single-engine piston fighters, it was recognised that there were potential advantages to fitting the engine elsewhere.

A fighter that fitted its engine in the centre of its fuselage would be better balanced, plus enjoy the possibility of being even more streamlined. Additionally, the freed-up space would allow the fitting of a centralised armament that could be much heavier than contemporaries that retained a nose-mounted engine.

The classic example of this was Bell’s P-39 and P-63 aircraft. 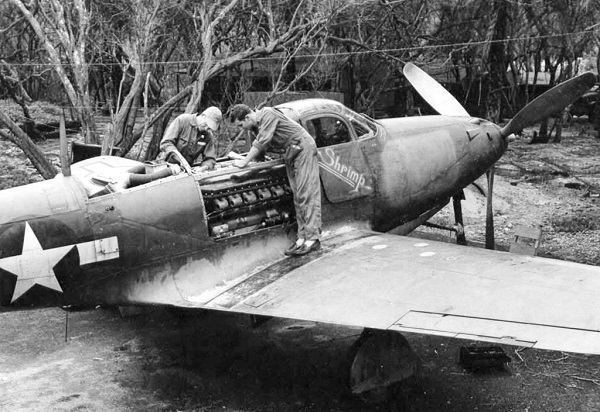 By moving the engine to the centre of the aircraft, Bell did achieve the desired streamlining and were able to fit a 37mm cannon in the nose, a hugely powerful weapon for its day.

Of course, the P-39s used an Allison V-12 liquid-cooled engine, because to fit the bulk of a radial engine in the centre of an aircraft would be crazy, right?

Meet the Piaggio P.119, because apparently the Italians didn’t get the memo. 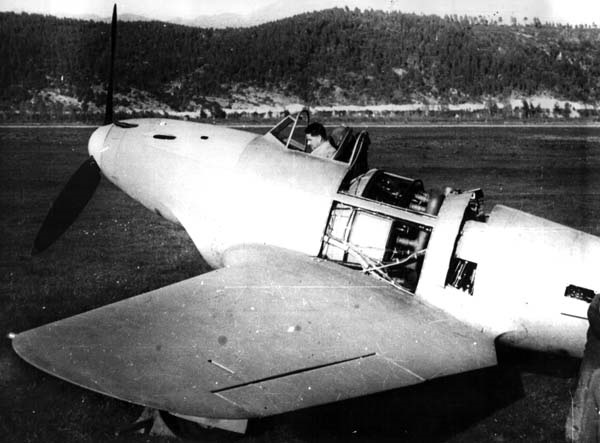 Piaggio have, to be fair, always been one to push the envelope, and the P.119 was certainly an interesting attempt to do that. The aircraft was designed with the intention of getting a piece of the huge new orders that the Royal Italian Air Force were placing in the years before the outbreak of World War Two.

But while other Italian companies like Macchi and Fiat were producing much more conventional designs Piaggio’s chief designer, Giovanni Casiraghi, wanted to develop something that broke the mould. The new aircraft would utilise as many components as possible built by Piaggio, as well as having a unique layout.

The P.119 had an all-metal airframe made up of three sections. The front and rear fuselage sections had a monocoque structure built of aluminium, while the centre section was constructed with a tubular steel framework that was skinned with aluminium panels. 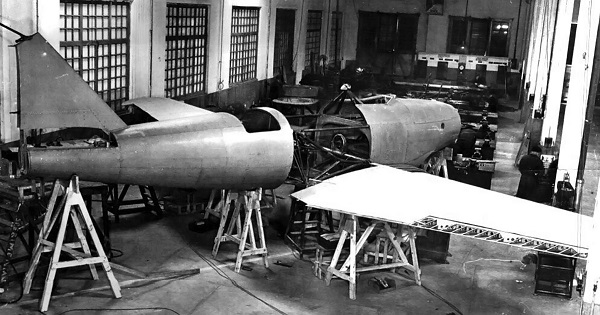 This section supported both wings and the rather large engine. Originally intended to be a Piaggio P.XXII that produced 1,700 hp, in fact development issues led to the prototype having the Piaggio P.XV instead.

This 18-cylinder radial produced 1,500hp and, due to its location, the aircraft had an extremely clean appearance with the pilot, in his forward positioned cockpit, having great visibility.

The all-metal wings housed the wide track fully retracting landing gear, as well as two fuel tanks containing 330 litres. Combined with an additional fuselage tank behind the engine, the P.119 had a total fuel capacity of 1000 litres (260 US Gallons) which was considerably more than most contemporary single engine fighters of the day. 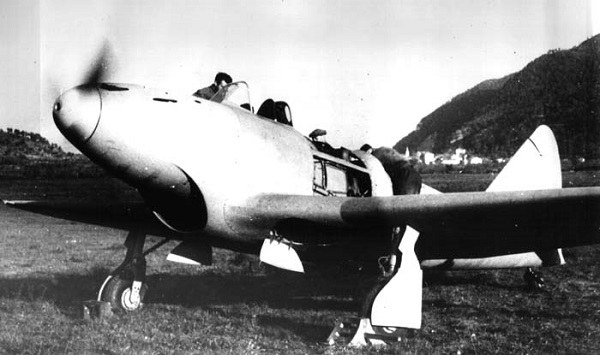 The engine drove a three-bladed propeller, also made by Piaggio, via a drive shaft that ran under the cockpit, and cooling was via a large air scoop under the nose. This provided air to the engines cooling fins, and then vented via a line of cowl flaps on the fuselage.

With a large amount of space in the nose, armament was also projected to be heavy for the time. A powerful Breda 20mm cannon with 110 shells was to be fitted firing through the propeller hub. This was to be backed up with four synchronized 12.7mm machine guns in the top of the nose, with 500 rounds per gun. 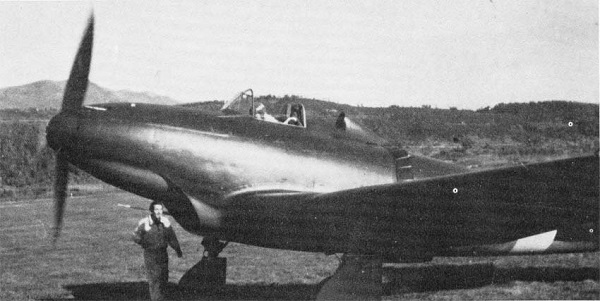 All of this would have provided a very concentrated battery of fire, but there were also apparently plans to possibly boost the armament with an additional two-to-four wing mounted rifle-calibre machine guns. There was also consideration given to a ground attack variant that would have had a 37mm cannon in the nose plus bomb shackles under the wings and fuselage.

In reality the prototype, when it flew, was equipped with only two 12.7mm heavy machine guns.

Piaggio first proposed the P.119 in March 1939, but apparently the Italian military, with plenty of other more conventional, and less risky options available, decided to delay authorising construction of a prototype until June 1941.

Taxi trials were undertaken in November 1942 and the first flight took place on the 19th of December. Somewhat unsurprisingly, this showed that the P.119 had engine cooling issues, and this meant that the cowl flaps had to be left open during the flight, which slowed the aircraft and created stability problems.

But the principle appeared to work and Piaggio continued to develop the prototype looking to resolve the issues. A number of flights were subsequently made, and the aircraft seems to have displayed good performance.

It is difficult to be sure, because this aircraft is somewhat nebulous and sources on its performance vary, but it seems that the aircraft achieved a top speed of around 400mph (c.640 km/h) and a ceiling 41,000ft (12,500m).

Testing was going well enough that the P.119 was scheduled to be sent for official assessment by the Air Force when, on the 2nd of August 1943, the prototype suffered a landing accident. 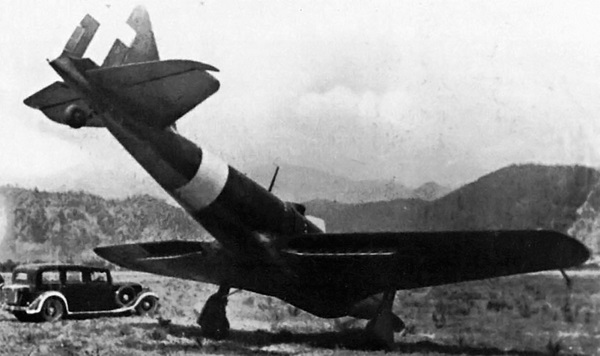 The damage was fairly minor, with repairs needed to the propeller and one of the wings, but the timing couldn’t be worse.

As Piaggio were contemplating fixing their aircraft, the Italians signed an armistice with the Allies, which became public on the 8th of September. The consequent occupation of most of Italy by the Germans and the ensuing chaos meant that the repairs on the P.119 never happened.

The aircraft subsequently vanished into history, the assumption being it was scrapped for the materials it contained – a bit of a sad end to an aircraft that, as far as I am aware, was quite unique.