In 1961, the United States Navy fielded one of the most formidable air forces on the planet. The service operated thousands of aircraft, including the very latest and most formidable designs.

While many of these were the first generation of jets, the Navy was beginning to take on increasing numbers of the new F-8 Crusader. Additionally, the first squadron had taken delivery of the first F-4 Phantoms, the first third-generation jet to go to sea and a huge step up in capability in naval aircraft.

But while these remarkable aircraft were ushering in a new era a product of an earlier time, one that many of the hotrod pilots had flown their first flights on, was puttering around on its final service flights without fuss or fanfare. 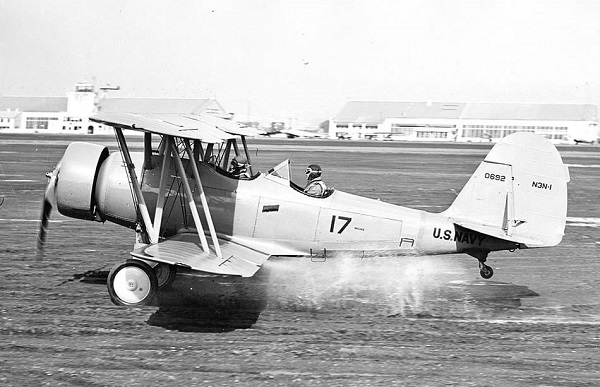 Though it might seem positively prehistoric compared to its fellows of the time, this aircraft had a unique history as the only aircraft designed and built by the US Government in substantial numbers.

The Naval Aircraft Factory had been set up in 1917 with the task of, well, building aircraft and parts for the US Navy. Located in Philadelphia, the NAF was a response to the Navy not being able to get commercial companies interested in designing and building appropriate aircraft for them.

Somewhat understandable, as the Army was buying every plane they could get at the time, so the aero companies had more than enough orders on the books without messing around with specialist naval aircraft. So, the US Navy decided to do it in house.

Then after World War One, the aero companies found that the orders had dried up and suddenly they really, really wanted the few Navy contracts available. They complained to Congress about the US Navy having their own factory, which put the commercial builders at a disadvantage, as they saw it.

And thus, the US Navy was basically banned from building their own aircraft. The NAF spent the next decade or so doing research into aircraft carrier catapults and arresting gear and making parachutes, some aircraft and the USS Shenandoah.

Everything changed in 1934 when the Vinson-Trammell Act was instituted. This would see the start of a major building program for the US Navy to begin replacing old vessels still in service. But it would also instruct that at least ten percent of aircraft, and their engines, should be built in government owned factories.

Not going to miss the opportunity, the US Navy promptly decided they needed a new primary trainer. This was to be built as tough and easy to repair as possible – probably wise considering its role.

The new trainer prototype first took to the air in August 1935 and a few issues were found. These were largely resolved, though the aircraft retained a few problems, and the following year the Navy ordered the type as the N3N-1.

In terms of design the N3N was a classic tandem-seat, open cockpit, trainer biplane, which actually hid some advanced features. The aircraft had an unusual for the time extruded aluminum framework rather than the more usual steel-tube construction. The front of the aircraft was skinned in metal back to the front cockpit – as was the vertical stabilizer – with fabric covering the rest of the airframe.

In fact, it very much looked like its great rival, the Boeing-Stearman Model 75. This aircraft was actually ordered by the US Navy in 1934 as the N2S and would ultimately serve in much greater numbers than the home-grown plane.

But what set the N3N out from its rival was its ability to have either a wheeled or central float undercarriage, which kind of affirmed the Navy’s original idea in building their own factory for specialist aircraft. 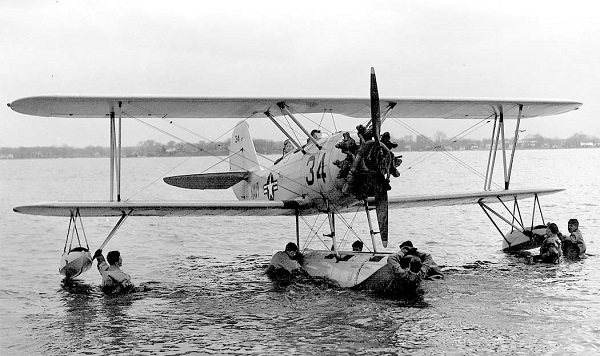 Both aircraft would receive the standard bright yellow-orange paint job as applied to US Navy trainers and would share the nickname of “Yellow Peril”. By April 1938 180 production N3N-1s had been built, powered by either Wright R-790-8 or R-760-2 radial engines. These respectively produced 220 and 235hp.

A single XN3N-2 prototype was built as well to test out ideas for ironing out the remaining handling issues with the aircraft, but the Navy didn’t pursue the idea until the clouds of war were well and truly looming.

With the Naval Expansion Act of 1938, the number of pilots the Navy needed to train rocketed and so did their need for trainers. The Navy therefore decide to remedy the final bugs in the design and a N3N-1 was modified to a new standard as the XN3N-3. This featured a new single-strut landing gear, a redesigned vertical tail surface and was powered by the 235 hp Wright R-760-2 radial engine.

This engine would become the standard as the Navy got a licence to produce it and the new aircraft showed a marked improvement over the first model. Production was ordered and between 1939 and January 1942 816 N3N-3s were delivered. These served primarily with the US Navy’s training squadrons, but small numbers also equipped the US Marine Corps and Coastguard, as well as a handful being sent to Chile.

The N3N would then continue to stutter around, providing steady service for the next twenty years or so. Though built in much lower numbers than the Boeing Stearman, the N3N would actually see longer use in the US military than its fellow “Yellow Peril,” becoming the last open cockpit biplane to serve until (as mentioned) 1961, when the last of the float versions was finally retired.

And being a simple, tough and easy to fly aircraft, quite a few are still buzzing around today. In fact, if you are in the United States, you can book a flight in one.