The Messerschmitt Bf 109 was the primary fighter of the Luftwaffe during the Second World War. First entering production in 1936, the -109 was built in unmatched numbers and remains the most produced fighter aircraft in history – a title that seems likely to be permanent. 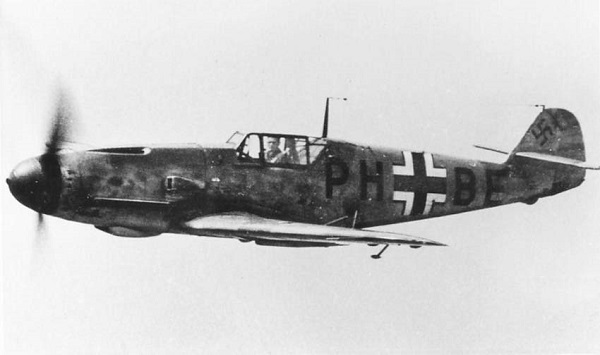 This level of success is due to the skilled engineering of the Messerschmitt design team responsible, which meant the -109 was able to be upgraded throughout the entire war to stay viable as a frontline fighter. But this need to upgrade and maintain the Bf 109 in service was more to do with the fact that once the war was in full swing, the Nazi’s had little option but to produce what they had available.

Because despite the Bf 109s success, it did, like all designs, have its limitations and this was recognised at an early stage in the aircraft’s career. This in turn led to several proposals to replace the -109 in production with more advanced aircraft.

There is an old aircraft maxim:

“If it looks right, it probably is.”

And honestly, I think the Me 309 looks right.

Which I’m afraid means either I’m wrong, or the maxim is, or this is the “so-called exception that proves the rule.”

As the Battle of Britain raged during the summer of 1940, Messerschmitt was studying combat reports, keen to draw lessons on the performance of both their current Bf 109E and of the Royal Air Force’s fighters. They concluded that what would be required in the future was a fully updated fighter that would implement a raft of new aeronautic technology to both improve performance and firepower.

Amongst these were the use of a fully retractable tricycle landing gear, a pressurized cabin and a variable-area radiator. As a result, Messerschmitt began several research programs in 1941 that utilised Bf 109Fs that were modified to test the new technologies. 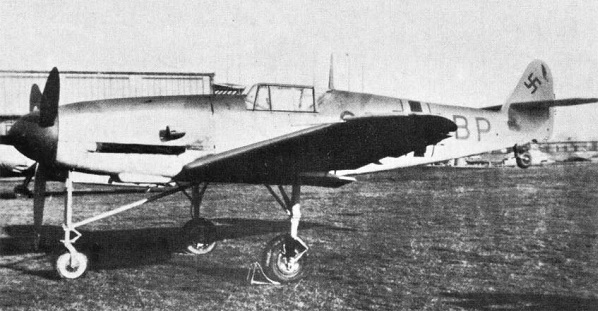 In fact, though Messerschmitt were keen to get on and replace the -109, the Luftwaffe and Reich Air Ministry considered it a low priority. After all, the Bf 109 was proving perfectly capable of handling enemy aircraft and being fitted with new engines and weapons as they became available. Plus, this was 1941; things were going pretty well for Germany at that point.

So, it wasn’t until June 27, 1942, that the first prototype even made taxing trials. 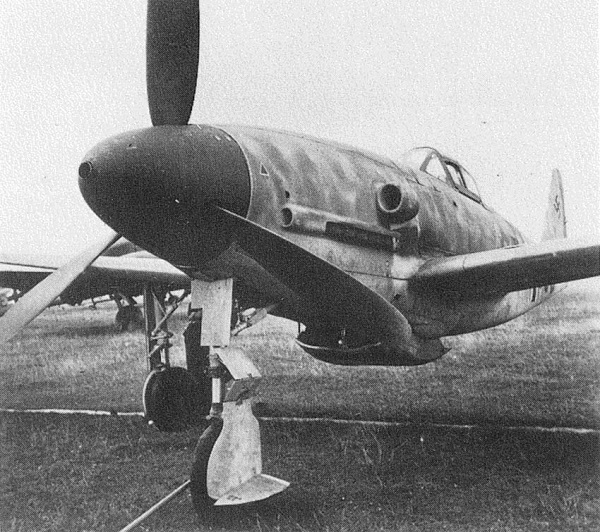 Now, you’d think that the Me 309, with little pressure on it in terms of development timescale plus a comprehensive testing program of the new technology and components to be integrated, should have a smooth development schedule?

The taxi trials revealed that the nose wheel caused serious wobbling and snaking, and this took several weeks to rectify. The first flight took place on the 18th of July and within a few minutes of lifting off the Me 309’s coolant temperature shot up to dangerous levels, causing the flight to be aborted.

As it turned out, the hydraulics were underpowered and when the aircraft had taken off the slow retraction of the nose wheel had impeded the airflow to the radiator, causing the problem. This was resolved, but continued tweaks and changes necessary to the prototype to make it reliably flyable meant that it wasn’t until late November that the aircraft was handed over for official testing.

As part of these trials the Me 309 was flown against a Bf 109G, which was then the newest variant of the older fighter and was in full production and coming into general service.

On paper, the Me 309 had a power advantage, as it was equipped with a Daimler Benz DB 603 engine. This was the largest 12-cylinder aero engine that Germany put into combat aircraft during the war, and in late 1942 had only just started being built. Producing 1,750hp at sea level, it was more powerful than the DB 605 fitted in the -109G, which produced 1,475hp.

The conclusions were mixed. The Me 309 was faster than the Bf 109, but not as manoeuvrable. As the test pilot noted in his report:

“The Me 309 will be acceptable after certain improvements have been effected, but it should be stressed that this fighter will provide the average service pilot with handling difficulties. Control forces are very high by comparison with those of current fighters…with full armament [it] will only be 30 mph faster than the Bf 109…”

Hardly an auspicious start, but worse was to follow.

Just after these flight test began, a second prototype, the Me 309V2 was completed and joined the test program. This had the DB 605 engine and, weighing less than the DB 603 of the original V1 prototype it was hoped that performance might be improved, despite the lower horsepower.

But on its first flight at the end of November the nose wheel collapsed on landing and the aircraft was written off. 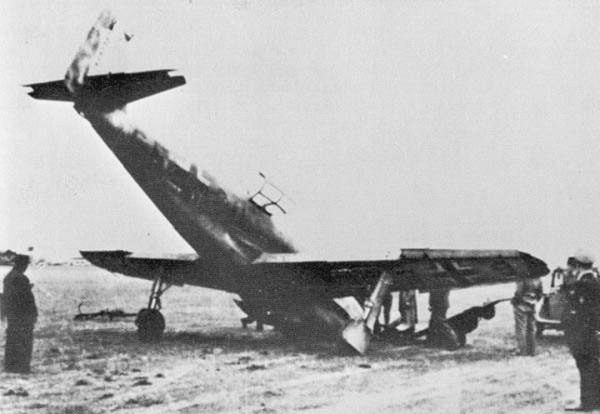 Flight testing continued with V1, which underwent changes to its fuselage and was reengined with a DB 605. In March of 1943 the third prototype got into the air and was used for high-speed testing, and this was joined in July by the fourth and last experimental Me-309V4. This was fitted with weapons and was to trial how the aircraft would handle in service.

There is some confusion as to just what armament was fitted to the Me 309V4, and this is probably due to the fact that Messerschmitt had intended to build several varieties with different weapon fits. The Me 309A-1 was to be a light fighter armed with two 13-mm machine guns and a 30-mm MK-108 cannon. The -A-2 was to be a heavy fighter with, depending on the source, up to seven or eight heavy machine guns and cannons of various calibres ranging from 13, 15, 20 and 30mm.

There was also to be an attack aircraft which was the -A-1 fitted to carry two 250kg bombs.

As it was the weapon platform tester, it is entirely possible that the Me 309V4 flew with differing fits to assess the best combination. And as the aircraft was later destroyed in an Allied air raid, details remain somewhat sketchy.

To the best I can determine, the Me 309V4 flew in mid-to-late 1943 fitted out in the heavy fighter configuration and was powered by the DB 605 engine. The aircraft had two synchronized 13mm machine guns in the top of the nose, a 20mm cannon and a 13mm machine gun in each wing root and two 30mm cannons in pods merged into the wings.

This was a quite frankly ridiculous amount of firepower, and probably explains why this aircraft is reported to have only managed a top speed of 357mph (575km/h).

As far as I can determine, no actual tests of the A-1 configuration were flight tested, and so performance figures are those of Messerschmitt’s projections, which seem to have been optimistic. Top speed of this aircraft is cited as being between 405mph (650 kp/h) and 496mph (c.800 kp/h) depending on the source and what altitude the aircraft was projected to be flying at.

I suspect the lower figures are closer to the mark and this, quite frankly in mid-1943, wasn’t anything special.

The FW-190D was in pre-production by this point and examples had already been field tested by combat units. The Me 309 offered nothing special on this aircraft, nor the projected and even more powerful interceptor that would become the Ta-152.

Worse, the BF-109G was proving able to carry almost as heavy an armament as the Me 309 at only slightly slower speeds and, more importantly, was pouring off the production lines.

So the Me 309 didn’t really offer anything special and in fact would’ve disrupted manufacturing at a critical time for no real gain in combat efficiency. The project was scrapped, and the three remaining Me 309s remained in use as technology testbeds. 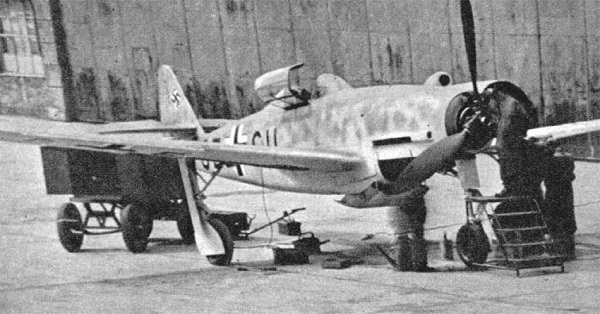 Here they made their real contribution to German fighter development, being used to test improved components like pressurized cabins and landing gear. And these would be used on an aircraft that was offering to change everything – the Me 262. 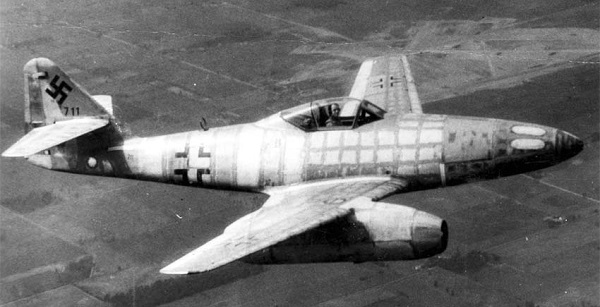 So, the Me 309s weren’t a complete waste of time and effort, as the original specifications and development work helped lay the groundwork for the next generation of fighter aircraft.