Aircraft designers have always wrestled with how to squeeze more performance out of the available powerplants and airframes and for those creating fighter aircraft this has always been a critical element of the job. And in the mid-to-late 1930s, with things getting a bit fraught, this was a topic getting a whole lot of attention as nations desperately tried to keep their fighter aircraft competitive in an increasingly dangerous environment.

One of the main ideas at that time was to build two engine designs. You doubled the available power, and often created space for greater firepower than was carried by equivalent single-engine fighters of the time. 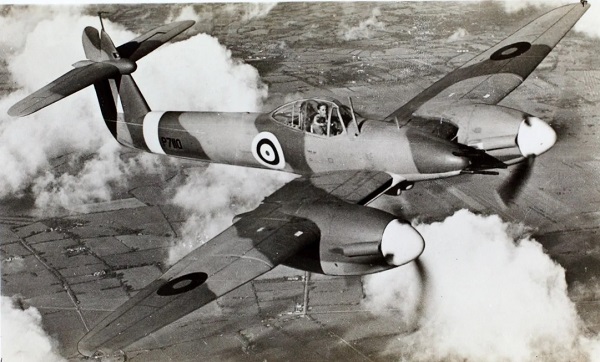 But this increased the aircraft’s drag and bulk substantially, often reducing things like roll rate and all-round agility, which is hardly ideal in a dogfight. What was ideally wanted was a fuselage as narrow as a single-engine fighter but housing two engines.

This led to aircraft such as the Fokker D.XXIII, which put two engines into a narrow airframe, one in the nose and one behind the cockpit. These would drive two sets of propellers in a “puller-pusher” configuration.

But this sort of design was tricky to get right, with the airflow for the rear mounted engine and propeller often disrupted, leading to inefficient running and often problems with overheating. Plus, it wouldn’t bare thinking about if the pilot had to bail out.

But the French had another idea on how to tackle the problem. In 1937 they began work on a design that had the novel idea of having one engine in the nose with another behind the cockpit, but with each driving its own propeller in a coaxial contra-rotating set up. They began development of an experimental type – the VB 10 – which unfortunately wouldn’t get to fly until after the Second World War. 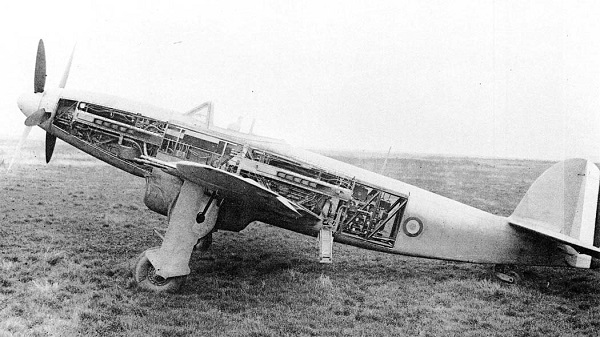 But he was also thinking about the future, and the twin engine principles of the VB 10 seemed like an interesting possibility. The problem would be in providing the rear mounted engine with enough cooling for it not to overheat in short order, whilst not having bulky radiators protruding that would negate the whole point by adding a lot of drag to the design.

And here the Japanese saw a development being worked on by the Germans as a possible solution – wing-mounted evaporative cooling systems.

To put an extremely complex bit of engineering simply, this takes hot coolant from the engine, pressure converts it to steam, moves that steam to cooling ducts in the wings where it is rapidly condensed and cooled back into liquid which can then be sent back into the engine cooling system.

And the Japanese were extremely interested in the potentials of this, importing from Germany two Heinkel He 119 experimental aircraft and three He 100 fighters, which all used the novel cooling system, for study.

These all allowed design studies on a new heavy fighter to be conducted and in January 1941 a production order was given for a prototype to be built.

The Kawasaki Ki-64, which was to gain the subsequent Allied code name of “Rob”. 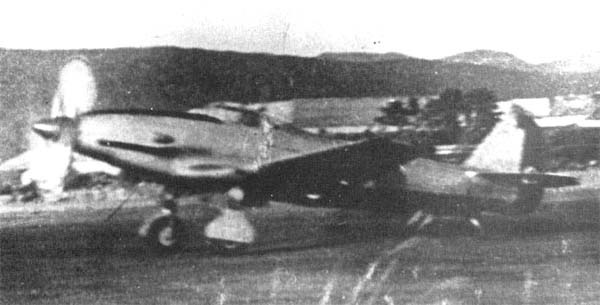 The new aircraft was of all-metal construction and was a taildragger design which at first look would appear reasonably conventional. However, it was long for a fighter at 11 metres (c.36’2”) in length – about the same as the P-47 Thunderbolt, which was a famously massive aircraft for a fighter.

But this length was necessary to house the powerplant, the Kawasaki Ha-201. This was composed of two Ha-40 inverted V-12 engines, which were a licensed Japanese version of the German DB 601 engine and was the same engine as used on the Ki.61.

But as said, the configuration was with one mounted in the nose, whilst the other was mounted mid-fuselage behind the pilot. This engine had its drive shaft run under the pilot’s seat and through the Vee of the front engines cylinder and into the propeller gearbox, where it drove the front adjustable-pitch propeller while the front engine drove the rear propeller, which was of fixed pitch. Together these produced 2,350hp, an excellent output for the time. 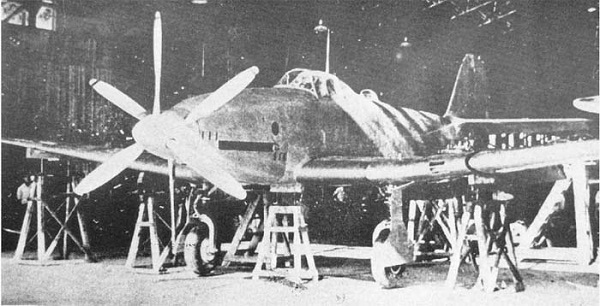 The contra-rotating propellers also countered torque issues that single-prop aircraft often experience and such designs are more efficient than solitary propellers…when they can be made to work properly.

For cooling both engines had their own wing-mounted evaporative system. One of the concerns often stated about why the Germans never adopted evaporative cooling, despite the advantages it gave over conventional radiators through significantly reduced drag, was the danger of combat damage. After all, if your cooling system is spread over a large section of the wings even a slight amount of damage will lead to a coolant leak and likely the loss of the aircraft.

The Japanese seem to have had less concerns on this issue, theorizing that having two separate cooling systems meant it likely that at least one engine would remain operational if one wing was hit badly enough to cause failure in the other through overheating.

And the benefits of reduced drag given by evaporative cooling shouldn’t be overlooked. The He 100 was a famously fast aircraft, holding the world speed record for a short time, while a Ki.61 modified to trial the system intended for fitting on the Ki-64 proved to be around ten percent faster than the conventional version.

Kawasaki also looked at where else to reduce drag on the Ki-64, and one example of this is in the exhaust vent for the rear engine, which was located just above the wings trailing edge. By minimizing protuberances, the Ki-64 looked a very “clean” aircraft and this all boded well for the aircraft’s performance. 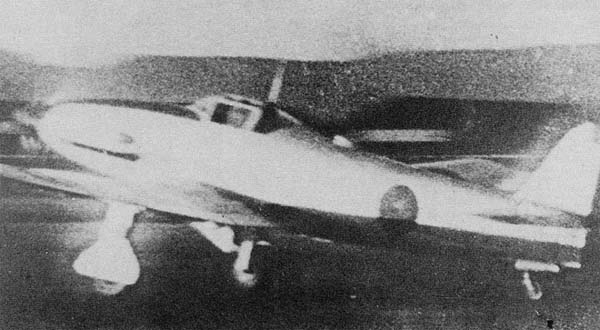 The “Rob” was completed in November 1943 and after conducting ground trials first flew in December of that year. The results certainly appeared good. The Ki-64 recorded an impressive top speed of 435 mph (700 km/h) at 4,000 m (13,123 ft), with a time to altitude of five-and-a-half minutes to 5,000m (16,404ft), though it must be pointed out that the Ki-64 was not carrying any armament to achieve this. This would have been either two 20mm cannon mounted in the wings plus another two in the upper engine nose decking, or possibly the latter switched out for two heavy machine guns. 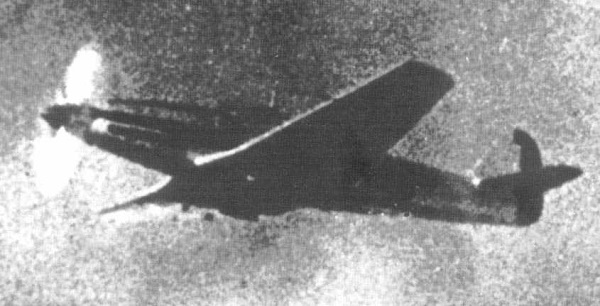 As it was, this was never to be. Despite the hopes for the novel cooling system, it proved to have multiple problems. The whole principle of the evaporative system relied on rapid airflow over the wings to make the system work, and as a result the aircraft showed a worrying trend to overheat rapidly when idling on the ground, taxying and during take-off. It also did this when the engine was at maximum output during rapid climbs – hardly ideal.

The Ki-64 completed four test flights, but on the fifth its rear engine caught fire and the pilot had to make an emergency landing. The damage was serious enough that both the engine and the Ki-64 needed substantial repairs.

Kawasaki apparently thought they would use the opportunity to make both modifications to the cooling system to try to remedy the problems and fit more powerful engines. This, the Ha-321, would have produced an estimated 2,800hp and Kawasaki projected that the aircraft would have been capable of around 500mph (c.800km/h).

But by this point it was 1944 and Kawasaki – and indeed the whole of Japan – had far more pressing concerns. Th Ki-64 languished at the Kawasaki factory, where in 1945 it was discovered by the American occupation forces. 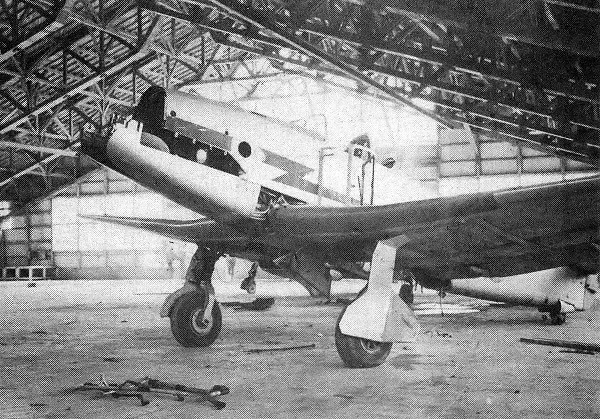 They proceeded to strip items of interest off the aircraft, mainly to do with the cooling system, and the rest of the aircraft was ultimately scrapped.