Even before the outbreak of the Second World War, the jet engine was very much of interest. Most major countries with an aeronautic industry were examining the idea and, to one extent or another, investing in developments in the field.

One of the most interested were the British, though officialdom was somewhat late in appreciating the possibilities offered by jets. In fact, British government interest didn’t start to gather pace until 1937 when designer Frank Whittle and his associates, working essentially as the absolute cutting-edge technology equivalent of “bloke-in-shed”, demonstrated the first engine run ever of a turbojet.

In 1938 Whittle’s Power Jet company started finally to receive proper funding and attention, and his experimental engines rapidly developed. In September 1939 the Air Ministry requested the development of a new aircraft using Whittle’s new powerplant, which ultimately developed into the Gloster E.28/39, which flew for the first time in May 1941. 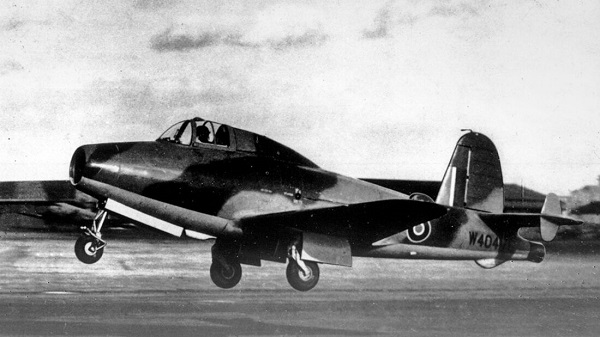 Responsibility for the new aircraft was handed to Gloster’s chief designer George Carter, who when seeing the experimental engine run on a test bench was apparently convinced that this represented the future. In fact, even before the E.28 flew, the British authorities had forgotten their earlier misgivings on jet powered aircraft and really wanted to get them into service.

The E.28/39 was actually designed for the fitting of four .303 machine guns, but the little jet didn’t have enough power to be an effective fighter. What was wanted was a much more powerful aircraft that would utilise two of the new Whittle W.2 engines. This would provide enough power to create an aircraft considerably superior performance wise to any propellor aircraft whilst also able to carry viable firepower.

Once again Carter was given the job, and he and his teams efforts would ultimately become the Gloster Meteor.

This would prove to be one of the most successful of the early jet aircraft, even if soon rendered obsolescent by developments in the field.

But things would not progress smoothly for the Meteor, mainly because of the engine. With no production facilities of their own – remember, “bloke-in sheds” – the contract to build the W.2 jet engine was given to the Rover Car Company.

OK, it was the War and manufacturers were expected to be able to provide anything required of them. But Rover, though a large manufacturer, couldn’t get a grip on building the W.2 at industrial levels, not helped by major personality clashes between their engineers and Whittle.

All this offered considerable concerns as to whether the Meteor would ever get into service. Indeed, the aircraft had development paused in late-1942 while investigations were made into whether the mess could be sorted out.

I’m sure is no surprise to you when I say it was, and Rolls Royce took over jet engine production and the W.2 was swiftly developed as the Rolls Royce Welland, which would power the first models of the Meteor and which produced 1,200lbf each.

(In fact, as a lesson in efficiency, a deal was quickly struck which saw Rolls Royce swap their factory building tank engines for Rover’s jet engine facility; an agreement apparently struck on the spot with a handshake between the respective company representatives. Hard to imagine two major corporations doing a deal of such scale on such a basis today, but there you go.)

But in 1942 and before this got resolved, there were real concerns that things were going badly wrong with Britain’s plans for jet engine production. And Carter, as essentially Britain’s foremost designer of jet aircraft, had a solution.

He was aware that several other companies were by this point working on building their own jet engines, many of which offered to prove far more powerful than the W.2. So, he proposed the development of a single-engine jet fighter as an insurance against the Meteor which would use one of these proposed new engines; the Halford H.1. This, which would ultimately become the de Havilland Goblin engine, offered approximately twice the power of the W.2 at around 2,300lbf.

The Air Ministry, as said concerned by the issues at Rover, jumped at the idea and issued specification E.5/42 expressly for its development, codenamed as “Ace”.

However, with Rolls Royce rapidly making good on the production problems and getting the Meteor back on track, priority soon dropped on the new aircraft and in 1944 the specification was replaced with a fresh one. This, E.1/44, called for a new single engine fighter that would use Rolls Royce’s latest jet engine under development, the Nene, which would produce 5,000lbf.

Priority remained low though – understandable considering that Gloster were then building Meteors in large numbers – and so it wasn’t until 1947 that the first of three-prototype aircraft was completed. 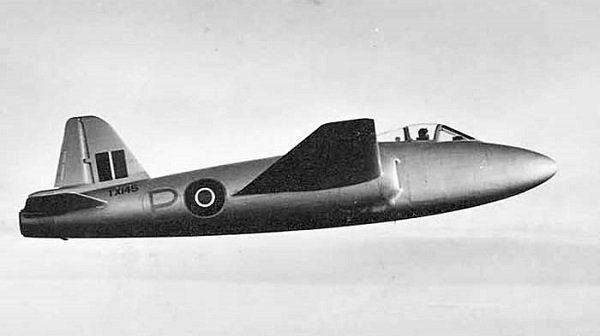 These were also classified as the GA.2 (the GA.1’s being the original proposed aircraft from the 1942 specification) and they looked like an interesting design.

The GA’s had a stressed metal skin with a mid-wing layout – which unusually were skinned in stainless steel – and a tricycle undercarriage. Armament was to be four 20mm cannon, though these weren’t fitted, and the wings stressed to take either drop tanks, a thousand-pound bomb or rocket rails. Air intakes were small semi-circular inlets either side of the fuselage just in front of the wing roots.

Things didn’t start brilliantly for the Ace when the first prototype was actually written off in a road accident as it was being transported to conduct the types first test. As a result, first flight didn’t occur until March 1948.

This too didn’t go well.

Bill Waterton, the test pilot, thoroughly slated the aircraft, most notably in the prologue of his memoir “The Quick and the Dead”. In that he described the aircraft as “a tubby, trunkless, silver-winged Elephant of an aircraft.” He would also christen the Ace the “Gloster Gormless” and is apparent had nothing good to say about it.

Without doubt there were issues, and Gloster set about seeking to remedy the handling problems by altering the tail arrangement, moving the horizontal stabilizer from inline with the main wing up to a “T-tail” position on the second prototype.

This apparently sorted many of the problems, and the design would go on to be used on later models of the Meteor.

John Dell at the Dinger Aviation website has an interesting article examining Waterton’s allegations against the Gloster Ace and has some interesting theories and points about the roots of his issues with both the Ace and the Gloster company, which is well worth a read and which I shall link to it in the description.

Because the renewed testing showed that the Ace had a top speed of 620mph (c.1,000km/h), which was faster than the Meteor F.8 that was under testing at the time and appears to have resolved it’s handling issues. 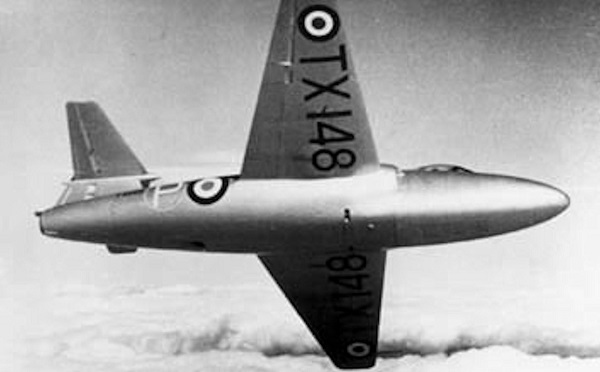 But to be honest, the performance wasn’t that much better than the Meteor and that aircraft’s two engine layout was viewed as a better option for the reliability it provided. Plus by this point – 1948/49 – there were better aircraft in development.

The Hawker company was actively working on a new swept wing design that would use the even more powerful Avon engine, an effort that would eventually give birth to the Hunter.

And though the Ace may have made a useful fighter bomber, there was already two aircraft in advanced development that performed that role, offered reasonable promise and used the same Nene engine as the Ace – the Supermarine Attacker and the Hawker Sea Hawk.

And Gloster was part of the Hawker group. They had more than enough work already building Meteors, whereas Hawker were looking to secure contracts while their new designs matured and so it would have been logical to drop the Ace in favour of the Sea Hawk anyway.

And that is what happened. Testing continued with the type until 1951 and then they seem to have been scrapped. The only remains of the three aircraft built are an outer wing panel which is on display at the Midland Air Museum in Coventry, England.

And so, the Gloster Ace is basically forgotten today. But it is interesting to remember that but for Rolls Royce and Rover making their deal and sorting out engine production for the Meteor – a deal that basically set Rolls Royce up to be the major jet engine developer that they still are today – the Ace would likely have been the first Allied jet to see service, perhaps even before the end of World War Two. 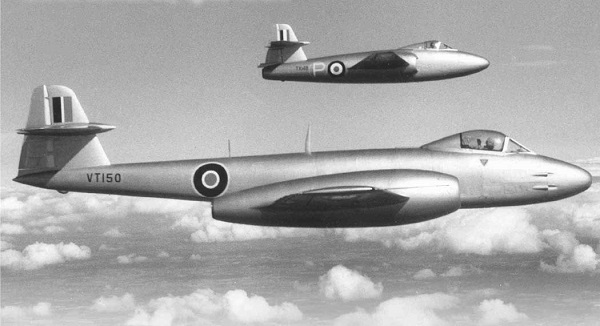