In the 1950s American aviation giant Northrop looked at the trend in fighter development towards bigger, heavier and more expensive aircraft and decided to buck it. This led onto the F-5 series of jets, which proved that there was a market for cheap, lightweight fighters.

But even before that, a small British company had already reached the same conclusion and was developing a jet that made the Northrop F-5s look like the Hulk! 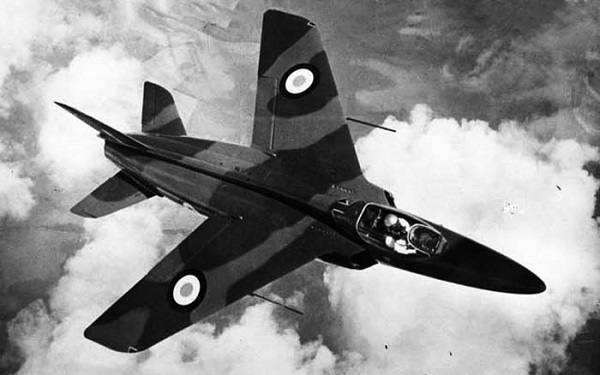 The Gnat originated from the fertile mind of aircraft designer William Petter. Petter had a somewhat complex involvement in the British aero industry, which I won’t get into, but he was without doubt a brilliant designer. He had already designed the Westland Lysander and Whirlwind before the Second World War and would help make important improvements to the Spitfire during it. In 1944 he moved to English Electric, where he would be team lead on the Canberra bomber and would start the initial development of what became the Lightning interceptor.

Being a man very much of the opinion that it was “his way or the highway”, Petter was difficult to work with. In 1949 he was off again, joining Folland Aircraft as managing director and chief engineer. He rapidly concluded that the philosophy adopted by the British Ministry of Supply on its combat aircraft was incorrect. Aircraft coming into service were increasingly heavy and complicated. To be fair, this was inevitable to get better performance out of the improving technology.

But Petter believed that in the event of an actual war, these designs would not be capable of being built in numbers able to sustain a long-term conflict. And seeing as he was drawing on his experience from World War Two, it’s hard to argue. Amongst the reasons for the cancellation of his Whirlwind design after a short production run was the sheer complexity and amount of material it used for construction.

Petter quite logically realized that, with full-scale war with the communist bloc very much a possibility in the early-1950s, a lightweight, simple fighter with low production and operational costs was the logical option; in modern parlance, one that was “sustainable”.

Folland then set about developing such an aircraft at their own expense. Petter wanted the Bristol Orpheus as powerplant for the new aircraft, but this was still in development. To maintain the publicity campaign that he had created to generate interest in both the concept and the new fighter, he built a proof-of-concept demonstrator first. This flew In August 1954. 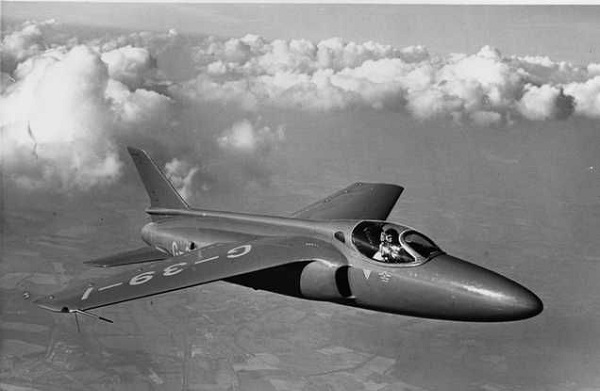 Company designated the Fo-139 Midge, the tiny aircraft was powered by a Viper turbojet that only produced 1,640lbs of thrust. Despite this, it still clocked 600 mph as a top speed and was able to break Mach in a dive. Test flown by pilots from a range of countries, they praised it for its excellent performance.

The Midge was lost in a crash in September 1955, tragically killing the Swiss pilot who was flying it, but as a concept demonstrator it had been a great success. Folland was in fact already proceeding, again at their own expense, in developing a much more capable aircraft. The prototype of this in fact first flew in July 1955 and was named the Gnat. 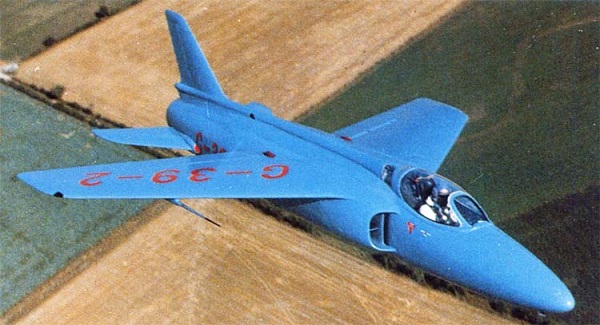 Larger than its predecessor this had a Bristol Siddeley Orpheus jet engine that produced 4,700lbf. The aircraft was extremely agile and cited top speed was 695mph – just below Mach One – and rate of climb 20,000ft/6,100 metres per minute.

The aircraft was truly tiny, with the fighter variant, the F.1, measuring just over 28 ½ feet (8.7m) in length and with a wingspan a little over 22ft (6.76m). Naturally, these dimensions meant that it paid the price in both fuel and ordnance capabilities. The new aircraft created quite a lot of interest internationally. Built primarily as a dogfighter, the Gnat was a pilots dream to fly.

With an armament of 2 30mm ADEN cannon, and four hardpoints for two 500 lb bombs and rockets, it also had plenty of teeth.

And it certainly made some impact. When Petter set about developing his concept for a lightweight fighter, he was quite vocal about it. As an internationally known figure in the aero community, his ideas got some traction. In 1953, NATO issued a requirement for a new lightweight tactical strike fighter capable of carrying both conventional and tactical nuclear weapons and being as simple as possible to maintain.

At least one publication at the time made the assertion that this was inspired by Petter’s ideas and the new fighter he was developing. Despite this, the Gnat was not apparently considered for the competition.

Additionally, the Royal Air Force were not interested in the little fighter. They had already selected the larger Hawker Hunter as their new air superiority fighter, but they did think the Gnat might hold promise as a trainer aircraft. Folland therefore developed a two-seater that would become the most well-known variant.

With a new wing and longer than the fighter variant, the Gnat T.1 also had an improved flight control system and entered service with the RAF in 1962. It became the main advanced trainer for would-be fighter pilots in British service and gained great fame when it became the first aircraft of the newly formed Red Arrows aerial display team. Here the type’s agility was demonstrated all around the world at air shows as the Red Arrows began to forge their legendary reputation. The Gnat served as the RAFs advanced trainer until 1978 and with the Red Arrows until 1979 before being replaced by the Hawk trainer.

But while the Gnat was wowing the crowds, it was also gaining quite a reputation in its original field. As already stated, the F.1 fighter variant had gained a lot of interest when first demonstrated. This translated into sales with Yugoslavia, Finland and, most particularly, India. The latter had practically ordered the type when first viewing it and by 1958 the first were entering service with the IAF. Further production was undertaken in India, initially from parts kits and then by full license, the first Indian Gnat flying in 1962.

The Gnat F.1 would become a significant aircraft in the IAF and rapidly proved that it was as capable a fighter as Petter had envisaged. With the outbreak of the Indo-Pakistani war on September 1, 1965, several squadrons had been re-equipped with these aircraft and the Gnat played a prominent role in the conflict. The IAFs old Vampires and Mysteres did poorly at the start of hostilities against the Pakistan Air Force’s capable F-86 Sabres. Gnat’s were deployed to counter. 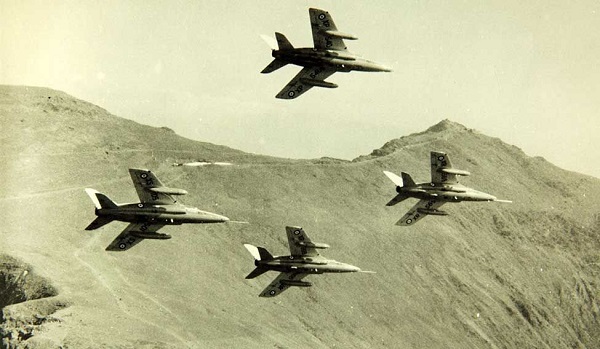 Small, fast and extremely nimble, they appear to have proved just the ticket. On September 3, they claimed the first of seven Sabres they shot down during the war, while stating they only lost two to enemy fighters. The Indians were deeply impressed by the Gnat’s performance, and it was again used heavily in the following 1971 war. Here it again proved a formidable counter to the Sabre and was given the moniker by the Indian’s of “Sabre-Slayer”.

IAF Gnat’s also saw use as ground attackers, and proved somewhat successful in this role too, despite their limited weapon carrying abilities. In 1974 the last Indian Gnat came off the production line and the IAF used them in service until the late-seventies or early -80s. But this did not mean the end of the aircraft.

So keen on the Gnat were the Indian’s that they went on to develop an enhanced version, the Ajeet, which aimed to rectify the type’s worst failings. In fact, the little fighter had a few interesting attempts to turn it into a much more formidable aircraft.

Even as the F.1 was being developed, Folland were proposing the F.2 in an attempt to woo the RAF. This would have had an improved wing and an Orpheus with afterburner which was expected to put on 8,000lbf. This variant was expected to be capable of Mach 1.5, and was followed by proposals for Gnat’s that would be capable of carrying guided weapons or even twin-engines. There was even one that would have had two-seats, advanced radar and variable-geometry wings for use on carriers – a baby Tomcat, in effect.

Ironically, the Indians apparently did consider trying to develop a carrier aircraft from the Gnat. After all, it was already so small, you wouldn’t need to even fold its wings for storage! But all these ideas came to nothing, and the total cited figure for all Gnat’s produced, including prototypes and their Ajeet variants, is 449 airframes.

And the good news is, there are still quite a few about! On top of those in museums, a number are still flying, generally in private hands, and are still to be seen on occasion at air displays, generally in the UK and USA.