For many modern militaries, the attack helicopter is a key weapon system. Combining agility, armour and advanced weapon systems, these gunships are for many soldiers their primary form of air support. 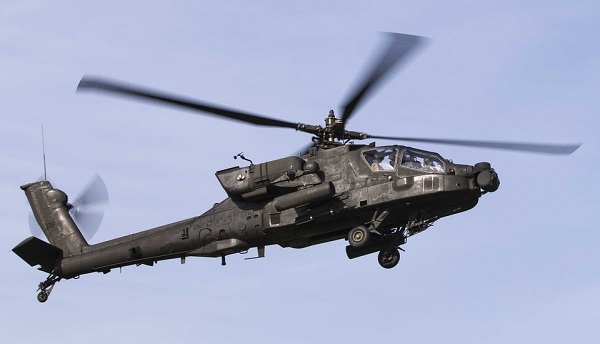 Able to operate for extended periods integrated with ground forces, they are one of the most efficient and lethal weapon systems available on the battlefield.

But of course, the modern attack helicopter did not spring out of nowhere and has evolved over the last sixty years to become the weapon it is today. And that is most readily apparent when one looks at the very first dedicated attack helicopter to be built. 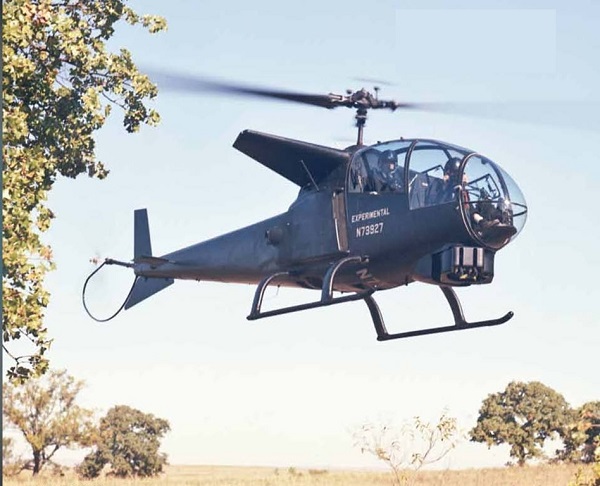 Although, to be fair, that statement is somewhat subjective.

The Scout was developed as a proof-of-concept by Bell to demonstrate to the United States Army that their aspirations for integrating close air support with their ground troops were feasible. This requirement arose because of the differences in attitude that were very much coming to the fore on the subject of tactical air support between the US Army and Air Force.

When initially founded the United States Air Force, then named the Army Air Service, had supporting the Army in the field as its primary reason for existence. But as the decades rolled on and air power became more powerful and important, the focus changed.

With the establishment of the USAF in 1947 the situation became even more pronounced. Though notionally still responsible for providing the US Army with their air support, the emphasis on supersonic jets and the delivery of nuclear weapons became the main focal point of the USAF as far as they were concerned.

Close air support had already largely been conducted by standard fighter aircraft converted to be able of providing tactical support during World War Two, and that had proven satisfactory. But as jet fighters became more expensive, specialised and with even higher performance throughout the 1950s, it was apparent that the USAF really didn’t seem to care much for tactical ground support, being instead obsessed with their interceptor and nuclear strike roles.

For the US Army, that was a serious concern. Accurate and consistent air support had been critical in both the Second World War and Korea to ground combat operations, and the apparent lack of interest by the USAF for the role meant that alternative forms of air support – conducted by the Army itself if need be – were required.

And none seemed to offer better promise than the rapidly improving field of helicopters. These had already been used in Korea for casualty evacuation and had been the subject to a great deal of experimentation throughout the 1950s.

The Bell company, who were helping lead the charge on helicopter development and adoption, were keen to offer a solution to the Army’s close support problem. Their Model 204 helicopter – later to be known as the Huey, you might have heard of it – had been selected for production in 1960 as the US Army experimented with how the new aircraft were going to be used.

Bell had already recognised the need for dedicated attackers and had been developing ideas for a new “helicopter gunship” concept for a few years. In June 1962 they presented the Army with a mock up for their proposal, the Bell D-255. 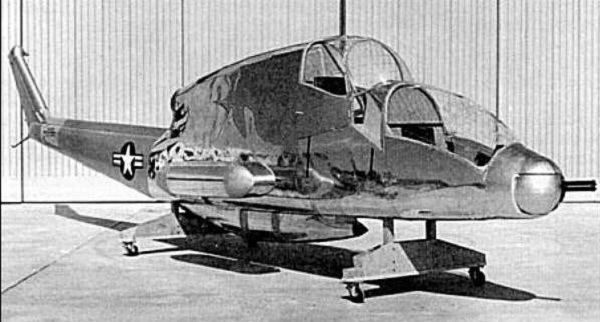 This would use components and the engine from the Huey, then in full production, and ally them with a narrow, streamlined two-man cockpit. Armament would be automatic weapons mounted in flexible nose mounting, with rocket pods and anti-tank guided missiles mounted on stub wings.

I mean, I think we can all agree that Bell largely nailed the idea with that proposal.

Further impetus was gained for the new attack helicopter concept when the Howse Board issued their report in August. This had been set up by Robert McNamara to investigate the Army’s tactical mobility requirements, and one of the conclusions made was for the US Army to have its own combat capable helicopters.

In December Bell was awarded a contract to build a proof-of-concept attack helicopter which could provide both model and lessons for the future development of this new weapon system. This was the Bell 207 Sioux Scout. 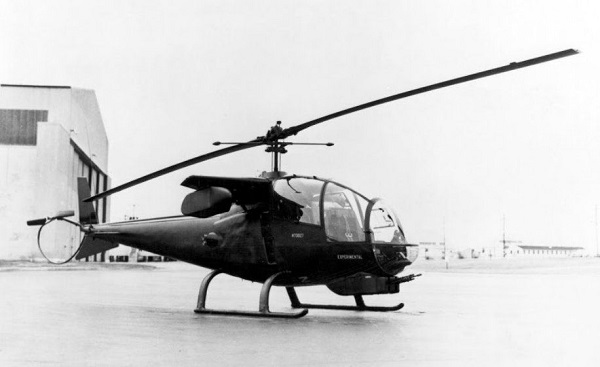 Because things were moving at breakneck speed by defence acquisition standards, Bell kept things simple. They took the rear fuselage and dynamic control surfaces from one of their Bell 47 and built a streamlined and all-glazed two-man cockpit with tandem seating onto it. 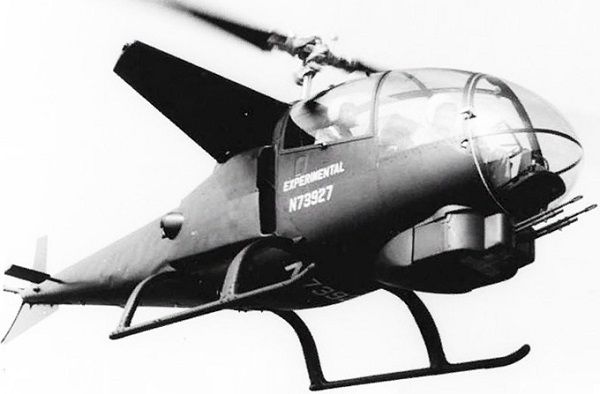 The pilot sat in the rear seat, whilst the gunner sat lower in the front. Both had sets of flight controls, though the gunner also operated the only armament on the aircraft. This was composed of two M60 machine guns mounted in an Emerson Electric TAT-101 chin-turret which was directly linked to the movement of the gunner’s sight. The turret allowed the guns to swivel in a 200-degree arc horizontally and between 15 degrees above and 45 degrees below the aircraft’s horizon. 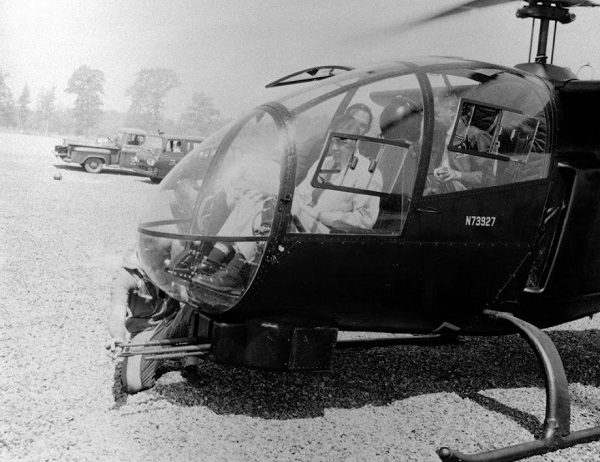 The -207 was also fitted with stub wings on either side of the fuselage just below the rotor. These were only intended for improving agility and for carrying auxiliary fuel tanks, though Bell did mock up rocket pods as demonstrators of the sort of weaponry future aircraft could carry. 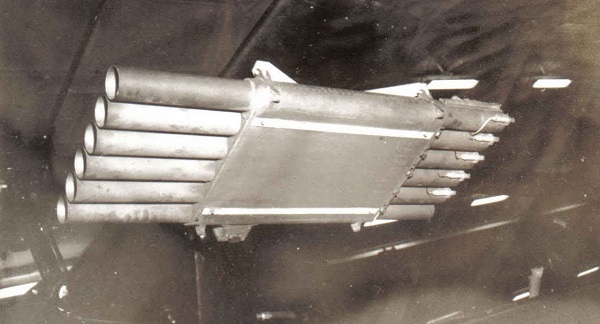 Powerplant was a Lycoming piston engine that produced 260hp.

The Sioux Scout’s first flight occurred on 27th June 1963, and the aircraft proved more agile than the standard Bell 47. More trials were conducted by Bell, and they tried several variations of wing, cowlings and tail boom elevators to find the best performing combination before handing the -207 over to the Army for testing at the end of 1963. They conducted several months of trials with the helicopter and were reported to be impressed with it. 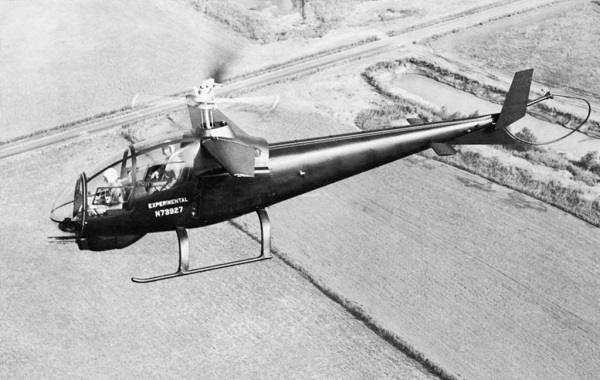 They did state that the aircraft need to be more powerful, and ideally a larger aircraft should be built that would allow for heavier weapon load and better performance. Which is exactly what was on the drawing boards anyway, because the Sioux Scout was, after all, just a proof-of-concept, and it handsomely proved the principle of the helicopter gunship in the trials.

In fact, the Bell 207’s lineage is quite discernible in the aircraft that followed in its wake, the Bell Cobra.

The Bell 207 still exists and is currently on display at the United States Army Aviation Museum in Fort Rucker, Alabama.