When President Jimmy Carter was elected in 1976, he was concerned by the proliferation of top-end fighter aircraft around the world. In the 1970s, both the F-14 Tomcat and the F-15 Eagle, the premier US air defence fighters, had been exported to Iran and Israel respectively.

Carter was concerned that such sales could have a destabilizing effect in a world largely split between supporters of the United States and the Soviet Union. After all, if the United States was going to supply their supporters with the latest weapons, the Soviet Union was almost certainly going to reciprocate. There were also worries about the reliability of some of the allies that wanted American aircraft – which proved prescient in the case of Iran.

Carter introduced a new policy in 1977 on the sale of American combat aircraft, which forbade the export of top-end fighters. There were a few exceptions to this. Both Israel and a number of European NATO countries had the new F-16A Fighting Falcon on order. These sales were allowed.

Japan, which had also selected the F-15 as their new fighter, was also considered fine. But for other Western-leaning nations, the policy represented a major issue.

Though the Carter administration may have had good intentions in trying to stop the proliferation of high-end combat aircraft, these countries had to deal with the reality of their neighbours acquiring modern planes from the Soviet Union. As a result, they turned largely to France.

Dassault had already enjoyed considerable export success with their Mirage III in the 1960s and their Mirage F1 in the ‘70s. In fact, the latter was to be substantially upgraded throughout the decade and in the 1980s as export customers requested more sophisticated aircraft. Dassault also had the new Mirage 2000 about to enter production and were actively hunting for sales. For Western-leaning nations, if the US wouldn’t supply aircraft, the French and others would.

By 1979 it was obvious that good intentions have little place in international relations, with reality being a far more pressing concern for most countries. Hence the implementation of the FX program. This aimed to develop an export aircraft that had performance, capabilities and cost between those of the F-5E Tiger and F-16A. The new aircraft should be optimised for the air-to-air role, with deliberately limited strike capabilities and a payload/range performance inferior to that of fighters in the US inventory.

Basically, a reasonably capable, primarily defensive light weight fighter and attack aircraft that was competent enough to be effective against contemporary Soviet designs, but inferior to those of the USAF and United States Navy.

In other words, America’s allies would be able to defend themselves against attack, but their aircraft shouldn’t make them confident enough to launch their own offensives. And should these allies change sides, as happened a fair bit during the Cold War, the United States wouldn’t have too many problems wiping out the air force of their former buddy should that be necessary.

However, because the US government wanted any development funded by the would exporters themselves, only two American designs would come out of the FX program; the Northrop F-20 and the General Dynamics F-16/79. 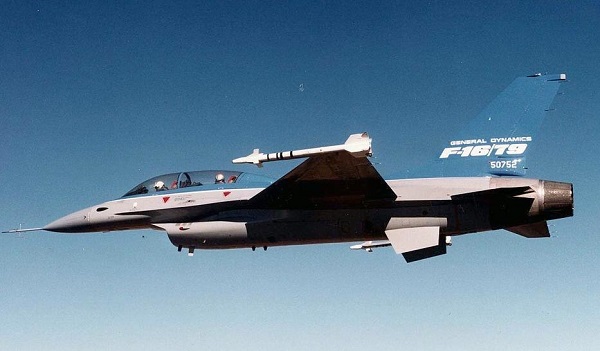 The F-16 was, in the mid-1970s already a topic of huge interest to air forces around the world. On top of being selected by four NATO countries to replace their F-104s, export licences for potential sales of the Falcon had been granted to Venezuela, Greece, Egypt, Spain, Turkey and Sweden.

It was also wanted by South Korea, Jordan and Taiwan – all key regional allies at the time. The new export policy thwarted that. But the F-16s manufacturer, General Dynamics, weren’t going to let that stop them.

Their market research at the time indicated that there were possible short-term sales opportunities of between 500 to 1000 aircraft to replace older fighters like the Century-series and the early F-5s. With a market available and then governmental sanction with the FX program, General Dynamics developed what was in effect a downgraded F16A. 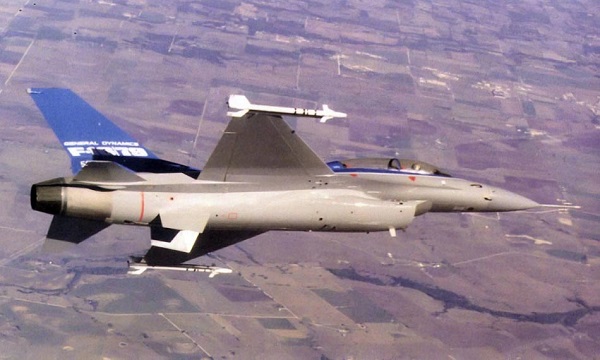 Key to this was the replacement of the F-16s Pratt & Whitney F100 turbofan with the J79 turbojet. This engine, which powered older generation aircraft like the F-104 and F-4 Phantom, was already cleared for export and in widespread service around the world. Indeed, many of the potential operators of the F-16/79 already used the J79, which would make training and supply issues during transition to the new type much simpler and cheaper.

Of course, the switch required some alterations. The air intake needed to be altered as the J79 required less air than the original powerplant. More significantly, the older engine was 18 inches longer than the F100, meaning the rear fuselage had to be extended. The J79 turbojet also ran a lot hotter than the turbofan, so a steel shield that added about a ton of extra weight had to be installed. This was further compounded by the J79s lower thrust. 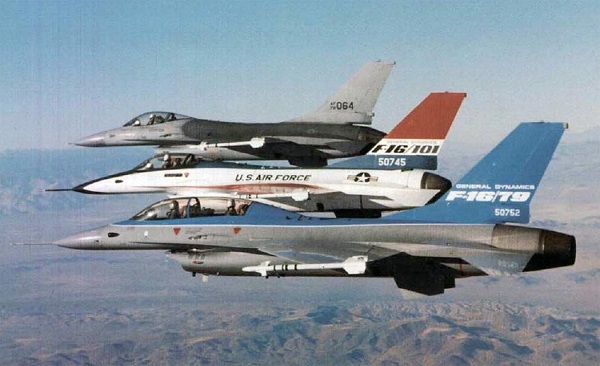 The original F100 on the first F-16s had a maximum rating of 23,830lbs, whereas the modified J79 that GD used on the F-16/79 put out 18,700 lbs of thrust. To try to compensate somewhat General Electric, who were developing the enhanced J79, fitted a “Combat Plus” setting on the engine. This could push thrust up to 20,840lbs, but only for very short periods and in very limited circumstances.

But for all that, the modifications needed to build the F-16/79 were fairly minor. GD installed a modified J79 on a F-16B two-seater and on October 29, 1980 the aircraft flew. Test flights showed that the F-16/79 was not too bad a performer, being capable of Mach 2, turning at 9g and generally having a reasonable performance. 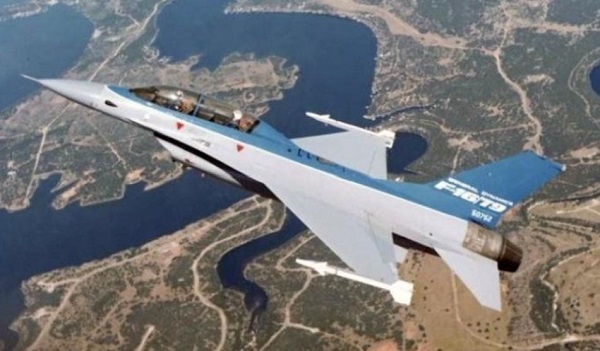 The J79 was much thirstier than the modern turbofan, cutting range, and the aircraft was certainly inferior to the F-16A in just about every way in flight but that was, after all, the point. As compensation it was cheaper, projected to have a fly away cost of about $8 million, at least a million less than the F-16A.

The specifications on its electronic and weapon fit were, as far as I’m aware, never properly set. But seeing as the original F-16 was built as a close-in dogfighter with limited attack capability – far from the formidable all-weather strike and Beyond-Visual-Range capable aircraft it would eventually become – it probably would have been a tweaked version of the existing systems.

In short, General Dynamics seemed to have nailed the specification. During the first half of 1981 the F-16/79 was flown by representatives of several foreign militaries, and up to twenty air forces considered the aircraft and received briefings on its capabilities.

But despite fulfilling the requirements it was built for, the F-16/79 was pretty much doomed at first flight. Many of its would be customers had already determined that they wanted the F-16A. With less power and greater weight, flying the F-16/79 was a definite downgrade and they were not happy about it.

Secondly, US policy was all over the place. After initiating the export restrictions, the Carter administration had already climbed down on some sales – notably on selling F-16s to South Korea. Then in January 1981, Ronald Reagan became President of the United States.

He had a quite different foreign policy take than his predecessor, with a much more aggressive focus on military expansion and upgrading, both for the US services and its allies. The embargo on arms exports was rapidly overturned and now customers could buy the same F-16s as the US Air Force.

And so there was literally no need for the “meh-Falcon” anymore. The F-16B that served as the test bed for the program was restored with its original engine and served on other technology development projects. The whole effort reportedly cost General Dynamics and General Electric, who shared the airframe and engine development costs, about $18 million between them.

Obviously, they would not have been too happy about having to shell out the money on what was basically just a short-term whim of the US government. But at least they could take solace from the fact that they were now in the position of building an aircraft that would go on to be one of the most successful export aircraft in history – the F-16.

And they were not in the situation of the creator of the aircraft that was their rival in the FX program, Northrop’s F-20 Tigershark, which was to be a huge financial hit for that company.

But that is the subject for my next article.