Prior to the Second World War Australia recognized that in the event of another major conflict, as seemed likely, they could not rely on supplies of modern aircraft being available for purchase. It was therefore considered prudent to build up the indigenous aeronautic industry, both to build aircraft under licence and to develop home grown designs should the fears of not being unable to obtain aircraft for home defence come to pass.

This proved wise, and with Japan’s attack on Pearl Harbor in December 1941 and subsequent conquest of a huge portion of the Pacific region, Australia found itself effectively on the front line.

The Australian Commonwealth Aircraft Corporation – CAC for short – did sterling work both building mainstay aircraft for the RAAF like the Beaufort and their own fighter, the CAC Boomerang series. This success inspired them to continue. 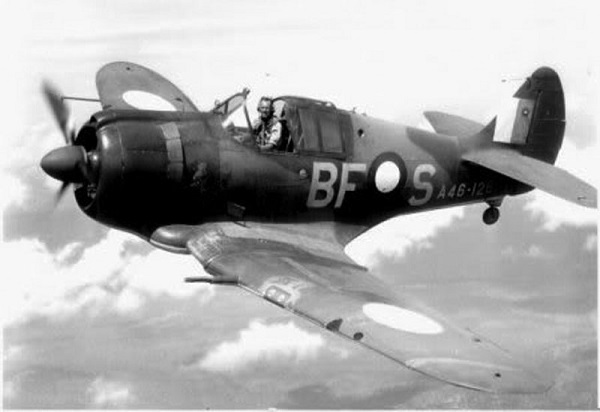 While the Boomerang had proven a tough and capable aircraft in service, no one was in any doubt that as fighters they had been outclassed by the current Japanese fighters in aerial combat. What was needed was a cutting-edge design – second to none – that would also double as a long-range bomber escort. In 1943 the RAAF gave the go ahead to CAC to develop the new fighter – the CA-15 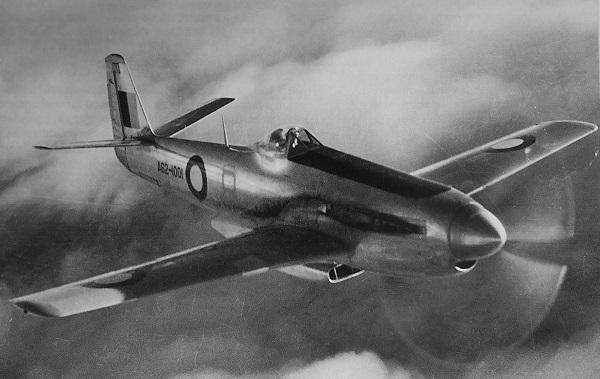 Despite the final layout the CA-15 would have, leading to comparison to the P-51 Mustang, in fact the initial design was much more closely modelled on the German Focke Wulf 190. Chief Designer of the CA-15, Fred David, was extremely impressed by the assessments being made of the then new German fighter and it was this that provided his inspiration. His initial design intended to use a radial engine like the FW 190 – principally the huge Pratt & Whitney R-2800 Double Wasp.

Which really should not be a surprise. Because Fred David – full name Friedrich David – was an Austrian Jewish refugee who had previously worked for Heinkel. He had also helped develop the Mitsubishi A5M Claude fighter and the D3A Val dive-bomber for Japan before the war.

With his successful Boomerang as well, it is safe to say that Fred David knew a thing about radial-engine combat aircraft design.

Unfortunately, while the Australians would prove capable of designing and building the airframes of modern aircraft, they had a problem that has bedeviled so many promising designs – engine supply.

The CA-15 was initially hoped to have the Pratt & Whitney R-2800-21 Double Wasp – the same as used in the P-47 Thunderbolt. This would have a turbo charger in the rear fuselage and produce 2000hp. 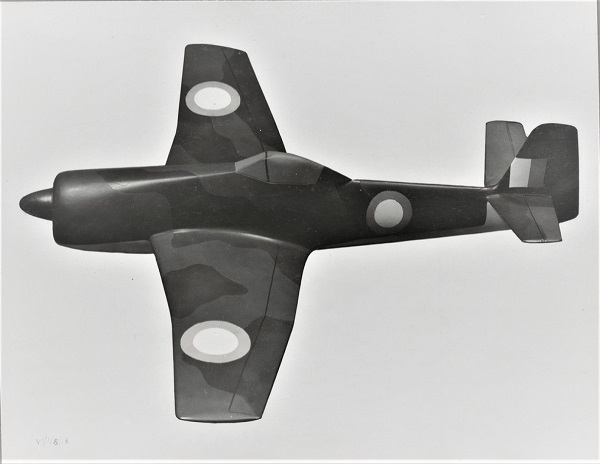 But in mid-1943, CAC was informed this engine wouldn’t be available and so redesigned the Kangeroo to use the R-2800-10W, as used by the F6 Hellcat, and which produced 2,300hp. Unfortunately, this engine utilized superchargers instead of a turbocharger and meant that the CA-15 would no longer be a high-altitude fighter, instead specializing in mid-to-low level combat.

On top of this, development was further slowed when CAC was granted a licence to produce the North American Mustang. After all, the Mustang was on route to becoming one of the Allies key fighter aircraft and getting them into service with the RAAF in numbers was more important than an aircraft that was still some way from service.

Fred David persisted, but again engine issues cropped up. In May 1944, with the prototype already being constructed, the team was told that the Double Wasp -10W was no longer available. Instead, they would have to use the R-2800-57, which again used a turbocharger, necessitating another fuselage redesign to fit it.

In August, the prototype was about 50% complete when, in a theme you will no doubt now be expecting, CAC got told the Double Wasp -57 would not be available to them. In fact, no Pratt and Whitney engine would be.

So, the team set about looking for another engine for their aircraft. They found it the Roll Royce Griffon 125 that was then under development. 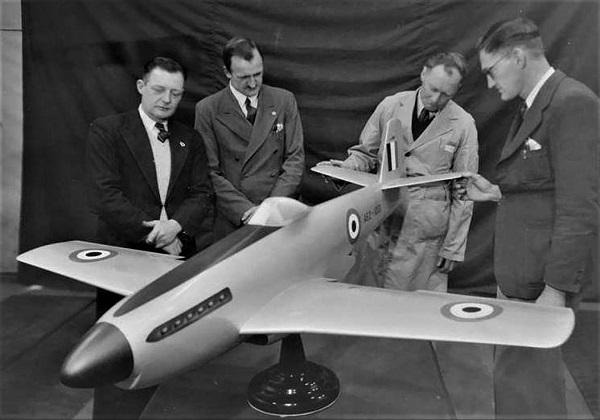 The use of the water-cooled Griffon entailed a major redesign of the prototype, but David and the CAC team did a remarkable job. It was at this point that the superficial similarity to the P-51D came about.

With its tear drop canopy, under belly air scoop, square-clipped wingtips and initially intended armament of six 0.5-calibre Browning heavy machine guns, the CA-15 certainly looks like a beefed-up Mustang. But in fact, as this long-winded discussion on the aircraft’s origins I hope makes clear, that similarity is very much coincidental – despite my clickbait title.

By early 1945 the CA-15 prototype was ready, simply waiting for the new Griffon engine to be delivered. This was projected to produce 2,440hp and was expected to make the CA-15 capable of a rather astounding maximum speed of 405 mph at sea level and potentially 495 mph at 26,000 ft.

Guess what happened next?

Rolls Royce said the Griffon 125 wasn’t going to be available until late-1945. In fact, they eventually cancelled it, but this was in the future and ultimately not a concern for the Aussie team. They wanted an engine, and they wanted it now! 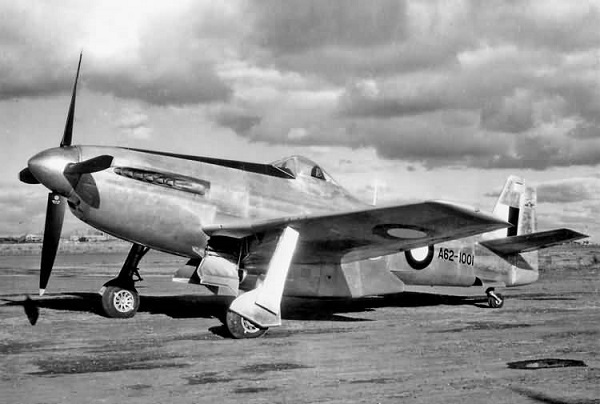 The aircraft needed a surprisingly few number of tweaks to improve performance, and once handed over to the RAAF test pilots in July the CA-15 was reported to be an excellent aircraft, with great handling and superb visibility for the pilot. With the Griffon 61, the CA-15 had a maximum speed of 368 mph at sea level, 448 mph at 26,400 ft and 432 mph at 32,000 ft. Initial climb rate was 4,900 fpm and ceiling just about 40,000ft.

The aircraft earned its unofficial nickname of ‘Kangaroo’ after the landing gear struts were over pressurized, causing the aircraft to bounce on landing, but this was rectified.

Flight testing was delayed when on December 10, the aircraft was forced to make an emergency landing because of a hydraulics failure, damaging the under-belly air scoop and radiators. 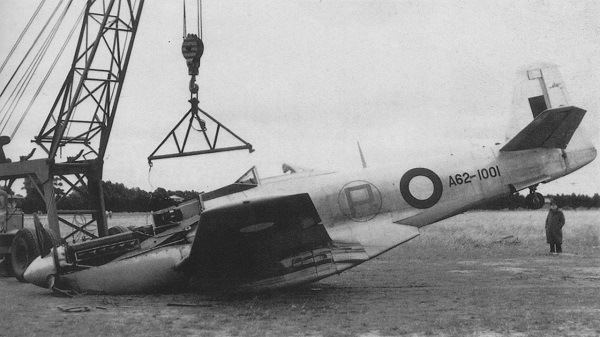 Though the damage was not serious, repairs took some time to complete, and the CA-15 didn’t fly again until May 1948. It was now that the aircraft achieved it highest recorded speed – 502 mph – achieved after making a shallow dive.

But, as with so many of the late-war ‘super prop’ aircraft, the CA-15s fate had long been sealed. The reason for the long delay in repairing the aircraft after its prang was that it was already obsolete.

In 1946 the RAAF had received its first jet fighter, the de Havilland Vampire. And while David’s team were still tinkering with the CA-15, the new jets very much showed how the future was going to be.

In 1950, Rolls Royce requested the return of their loaned Griffon engines. With no need for the aircraft with the RAAF, and the project essentially being now little more than a vanity project for CAC, the CA-15 was scrapped.

Which was, quite frankly, stupid as the aircraft should have been preserved, but seems to have been all too common with aircraft of this type.

The pity really is that the aircraft did not get its initial engine layout. Had this occurred, the CA-15 may well have become the primary fighter bomber of the RAAF throughout the Pacific in 1944-45. And instead of the “might-have-been Aussie Mustang”, we would be talking about the “Aussie Thunderbolt”.