The Brewster XA-32; The WORST Aircraft They Built?

The Brewster Aeronautical Corporation was, quite frankly, a bit of a disaster. The causes are varied and in fact were the subject of a Congressional investigation. But amongst them were greed, corruption, incompetence, chronic issues with worker’s unions and the fact that their factories were accused by the FBI of harbouring dens of Nazi sympathizers who sabotaged the aircraft they were building.

Indeed, the fact that the company’s initial production of its own aircraft was conducted at a multi-level factory in the heart of urban New York shows how badly Brewster was set up for mass production from the very start of the company. Their first production line (which really doesn’t justify that as a description) required individual parts to be bought from different floors to be fitted together. 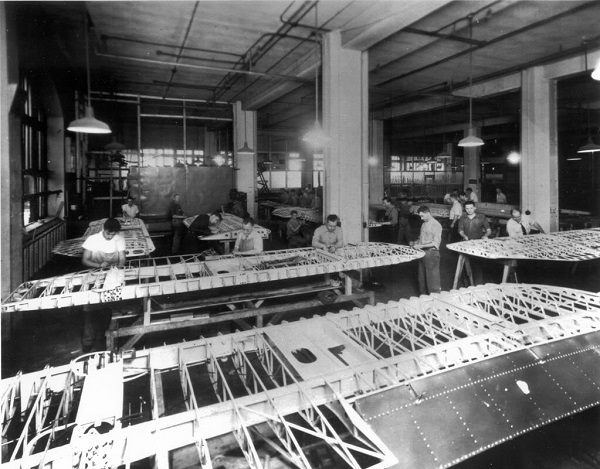 Then the whole lot was dismantled and sent for assembly and test flying at Roosevelt airfield on Long Island…fifty-five miles away! This sort of set up might work for a small producer of niche aircraft, but for one that would end up receiving contracts for thousands of modern combat aircraft it is kind of an indication that they might struggle to meet their contracts, which is exactly what happened.

Although the company would set up new facilities it was, essentially from the start, a bit of a basket case and all of this meant that Brewster built a lot of bad aircraft. And I don’t just mean their own designs; all told Brewster built 735 Corsairs under licence from Vought. These had such poor quality control that none of them apparently saw any action in front line combat as they are reputed to have had a nasty tendency for the wings to fall off when manoeuvring.

But Brewster’s own efforts at designing aircraft also make one wonder how the company managed to survive as long as they did. Most of you will be aware of the Brewster Buffalo, a dumpy little fighter that has been ranked as the worst aircraft of the Second World War. 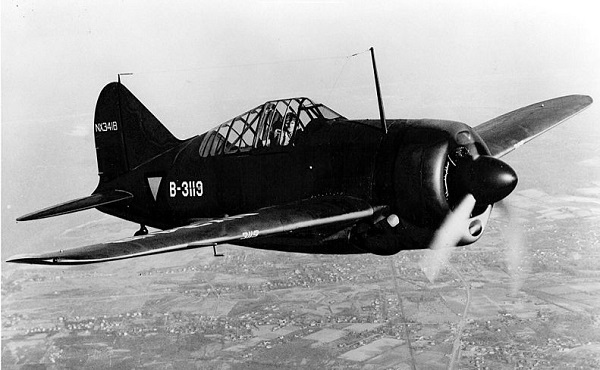 To be fair, there is a strong argument to be made that the Buffalo wasn’t necessarily as bad as it is generally remembered, though it very much seems to depend on which particular model is being discussed.

But there can be little doubt as to their next aircraft – the Brewster SB2A Buccaneer, known as the “Bermuda” in British Service. 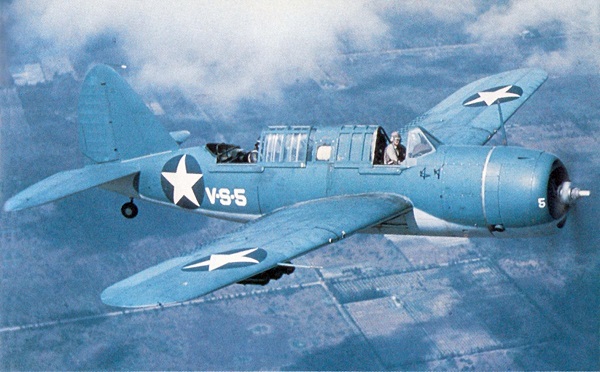 This, originally intended to be naval bomber that first flew in 1941, actually shows the secret to Brewster’s temporary success – countries were so desperate at the time that they would order just about anything they could right off the drawing board. It also shows the dangers of such an approach because the SB2A was so bad that they all ended up -at best – being used for target towing.

Indeed, many of the nearly eight hundred Buccaneers built were scrapped without being flown operationally, and the type is considered as a strong contender for “worst aircraft of the Second World War”.

But this epitaph is possibly only due to the fact that Brewster’s various customers and the US authorities cottoned on to the company’s truly dire capabilities before their final aircraft had a chance to see service. 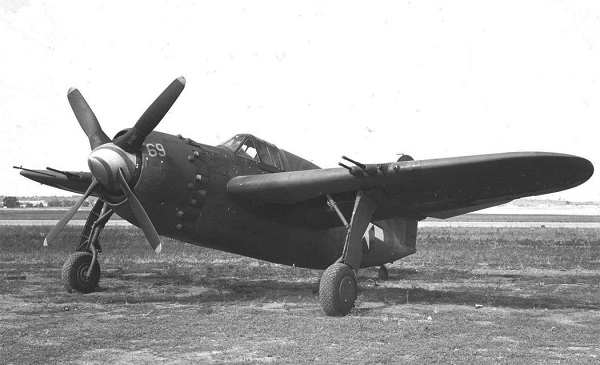 Though it seems difficult to imagine how bad things would have had to have been for this monster to actually get selected for service.

The roots of the XA-32 date back to a requirement issued by the United States Army Air Corp for a dive bomber in 1940. The impact of the Ju-87 “Stuka” in Germany’s various invasions that year had made an impression and the USAAC decided that having a similar capability would be useful. Several companies entered proposals, one of which was Brewster in 1941, which was awarded a contract to build two prototypes for testing by the USAAF.

In a lot of respects, the XA-32 was a classic Brewster, almost appearing as merging of both the Buffalo and the Buccaneer. Of all metal construction, the XA-32 was a single-seater that had a mid-wing configuration that allowed for an internal bomb bay. 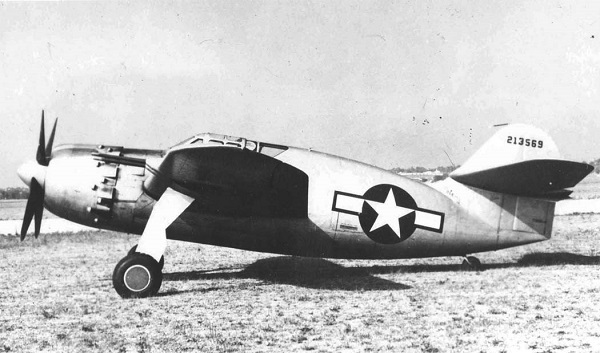 This could carry a 1,000lb (454kg) bomb which was supplemented by wing shackles that allowed for a total bombload of 3,000lb (1,360kg). This armament was supplemented with eight 0.5-calibre Browning machine guns in the wings in the initial prototype and four 20mm cannon in the second, which was designated as the XA-32A. 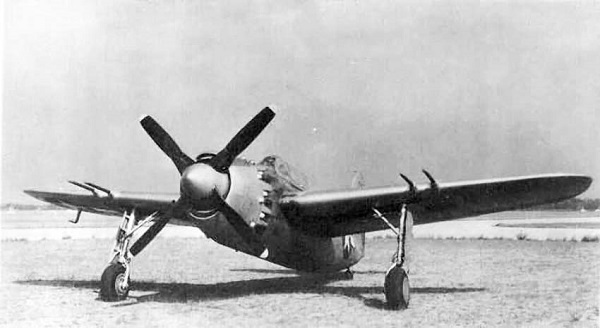 Powerplant was the stalwart Pratt & Whitney Double Wasp, which produced 2,100hp, and the landing gear was a solid wide-track to allow clearance for the internal bomb bay.

All in all, and certainly on paper at least, the XA-32 seemed like a solid proposition. But the problems began straight away.

In 1941, when Brewster entered the XA-32 for consideration, the company was already falling rapidly behind in its ability to deliver on its existing contracts for Buffalo fighters and Buccaneer bombers. Put simply, they had hardly any capacity to actually produce a new design, let alone get one into production.

The mockup of the aircraft was completed in early 1942, but it wouldn’t be until March 1943 that the first aircraft made its maiden flight.

By this point, the USAAF’s priorities had thoroughly changed. Combat experience had shown that dive bombers were often extremely exposed in the face of fighter opposition, and instead USAAF doctrine had switched to using faster attack aircraft for ground support missions, with the North American A-36 beginning combat operations in North Africa just weeks after the XA-32’s first flight. 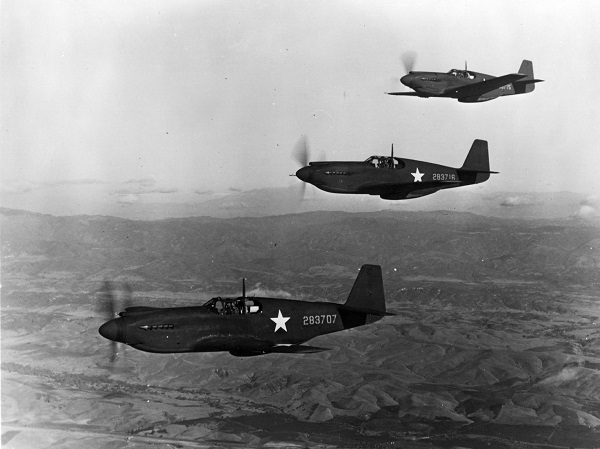 This was soon supplanted in the role by the P-47 Thunderbolt, which like XA-32 had an armament of eight Browing heavy machine guns, similar payload capability and a Double-Wasp engine. But that was where the similarity ended.

Because while the P-47, and indeed the A-36, were perfectly capable of tangling with enemy fighters, the XA-32 was a wallowing hippo of an aircraft. The testing showed that it was badly overweight, and although various sources come up with different figures, it seems that the XA-32 had an empty weight of around 13,500lb (c.6,124kg) and loaded was closer to 20,000lb (c.9,072kg).

It was also a truly huge aircraft for a single-engine, single-seat design, dwarfing even the P-47 which was a famously big aircraft. In fact, the XA-32 was closer in size and weight to the Grumman Avenger, which was designed for a three-man crew.

Needless to say, this severely impacted the XA-32s performance. Top speed was recorded as a mere 311mph (500km/h) while cruising speed was just 196mph (315km/h). 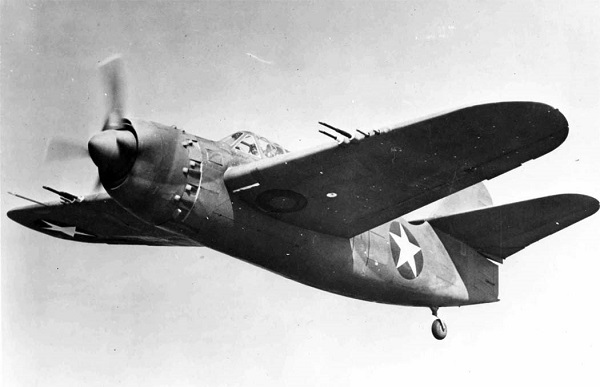 Basically, Brewster had managed to build an aircraft that had service performance worse than some contemporary heavy bombers but with less payload and survivability, and with a rather terrible combat range of just 500 miles (800km).

If that wasn’t all bad enough, the aircraft was just poorly thought out in other ways. The engine exhausts all vented via individual ports which, on top of being an aerodynamic cock up meant that the pilot was often blinded by the flaring occurring all around the engine cowling when flying at night.

The USAAF were distinctly unimpressed so Brewster, no doubt in an attempt to salvage something, proposed reengining the aircraft with Pratt & Whitney Wasp Major that would have provided the aircraft with 3,000hp.

But that was never to be as Brewster’s line of credit in forgiveness had by now thoroughly expired with the US Government.

In 1944 the XA-32 was cancelled, as were all remaining contracts with the US military with the company, with the failure to build any combat effective Corsairs and the terribly performing XA-32 appearing to be the final straws.

Brewster staggered on until 1946 but was then liquidated, making it possibly the only American aircraft company to manage to go broke because of the Second World War. The XA-32s were both broken up and that was the end of the last design produced by Brewster; an unlamented aircraft from an unlamented builder.