The B-29 Superfortress quite rightly has a reputation as a legendary aircraft. The product of a hugely expensive development program, one costing more than the creation of the atomic bomb, the B-29 was the pinnacle of the World War Two heavy bomber.

B-29s brought devastation to the Japanese home islands across huge distance, delivering the atomic bombs that bought the final surrender. Almost four thousand would be built, and they would serve in a host of roles. 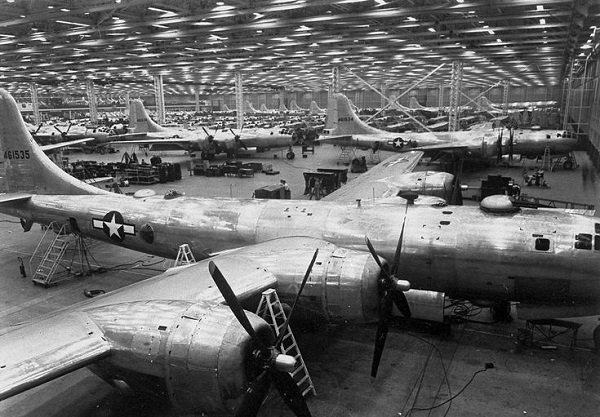 But the B-29 wasn’t without flaws, and even as the aircraft was just going into action for the first time, steps were being made to improve it. This would lead to the Boeing B-50, which would refine the Superfortress further with better engines and used improved alloys to provide additional strength.

The end of the war curtailed production, but three hundred and seventy B-50s would be built. These started entering service with Strategic Air Command in 1948 and would serve in the United States Air Force for the next twenty-odd years.

But Boeing still thought they could do better for the basic design and proposed to develop the ultimate variant of the Superfort. 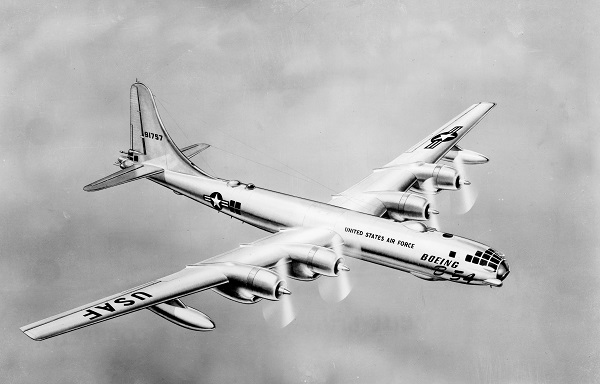 This was initially type designated the B-50C, but the changes were significant enough that the aircraft was considered worthy of its own designation. Although, it is notable that US aircraft manufacturers did (and do) like to change designations to justify fresh orders.

But while the B54 certainly looked like its predecessors, there were some major differences. The most notable of these was, again, a change to the engines.

The Pratt & Whitney R-4360 radial engines of the B-50 were to be upgraded with a Variable Discharge Turbine (VDT). This system used a nozzle for the engine’s turbosupercharger exhaust which could constrict flow and create jet thrust from the nozzle. 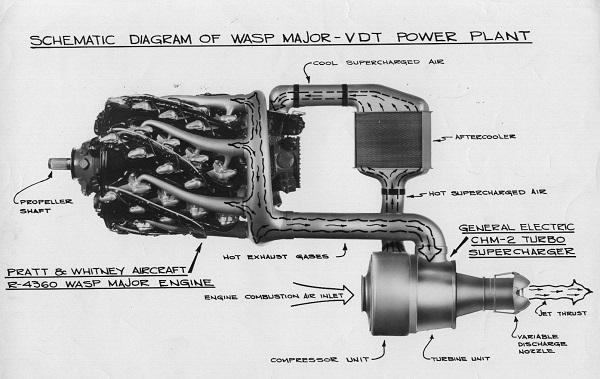 And it seemed to work. Output from the VDT engine was rated as equivalent to 4,500hp, in comparison to the B-50’s standard radials that put out 3,500hp. And the VDT engines more than doubled the power output of the original B-29s Wright Duplex-Cyclones, which produced 2,200hp. 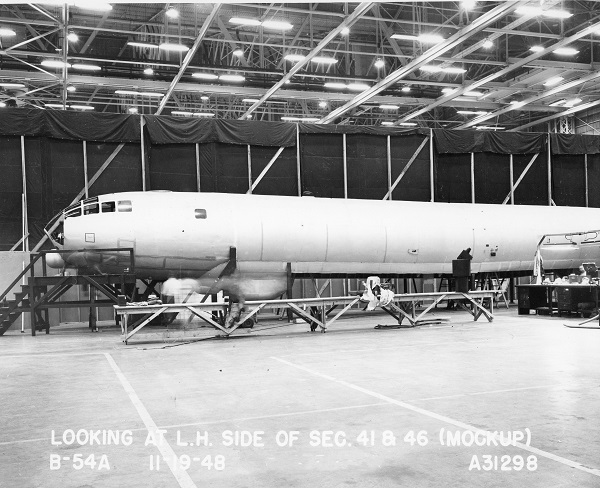 Wingspan was increased by 20 feet to 161’ 2” (about 49.1 metres) which required additional outrigger landing gear to be fitted to stabilize the aircraft on the ground. The fuselage was lengthened by a little under 11’, making the aircraft 111’ (34m) long.

A major change was made to the bomb bay. This was considerably enlarged, meaning that the maximum possible bombload went from 20,000lb (9,100 kgs) of the B-29 and B-50, to 36,000lbs (16,000kgs). Additionally, fuel capacity was much increased, including the ability to carry auxiliary tanks in the bomb bays.

Range was much improved as a result. Where the B-29 had a maximum range of 5,600 miles, the B-54 was expected to have one of 9,000 miles. And in terms of combat capability, the B-54 was going to be much more capable than the B-29, which was still the backbone of SAC and only a few years old itself. As a detail sheet prepared by Boeing for the USAF shows, with both types carrying a 10,000lb bombload, the B-54 could cruise 60% further and 22% faster. 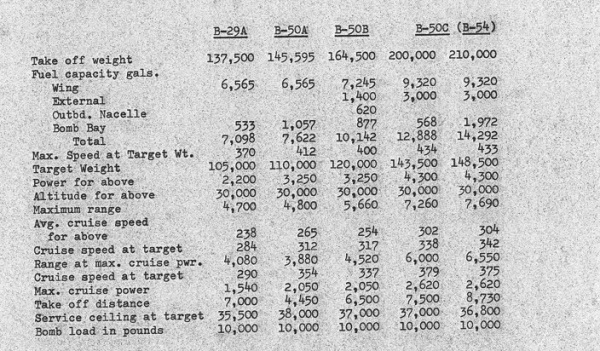 The basic defensive weaponry of the B-54 was also tweaked. It retained the ten remote-controlled 0.5 caliber Brownings in four turrets as its forebears but had a manned tail turret that had four of the heavy machine guns. 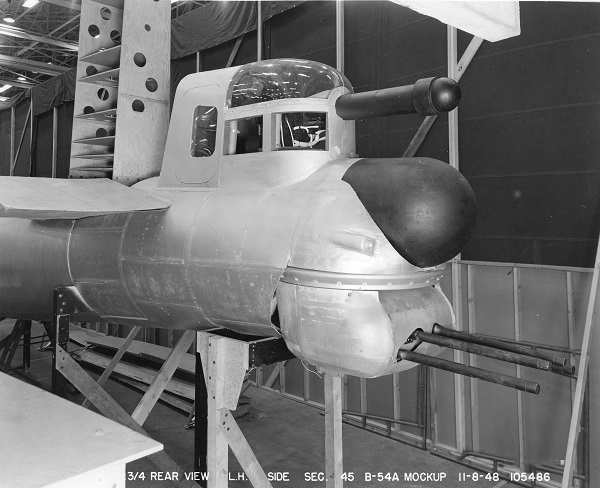 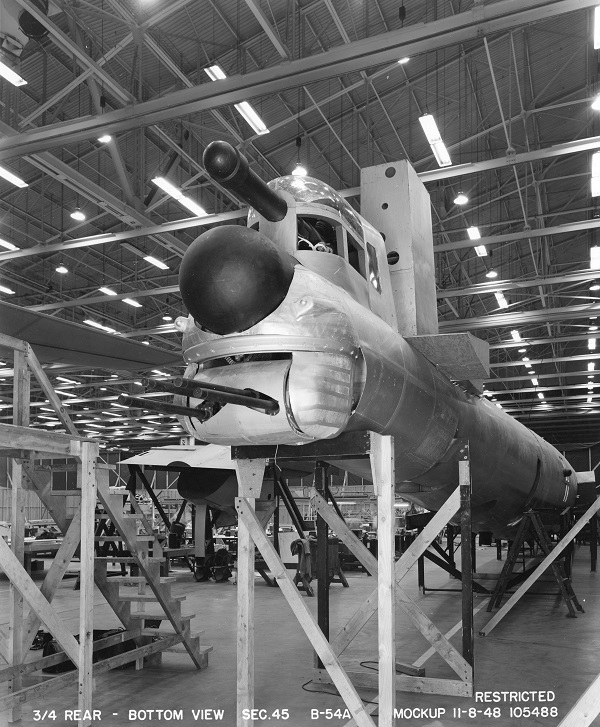 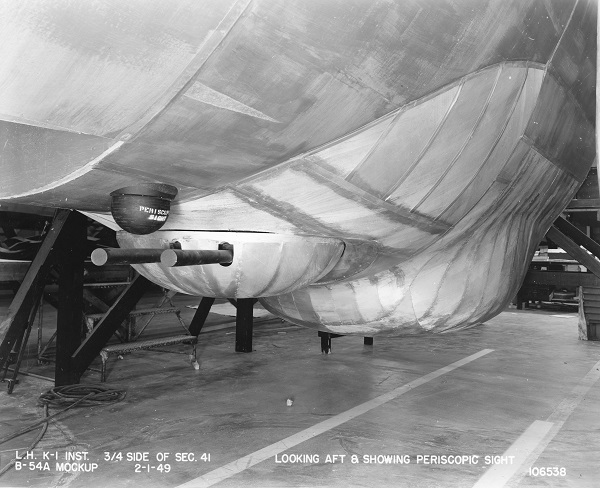 The enhancements were enough that on May 29, 1948, the USAF ordered seven B-54s as pre-production test beds and 23 RB-54 long-range reconnaissance aircraft. Two months later, on July 29, the USAF confirmed to Boeing that the B-54 was an important part of a new five-year national defense plan. 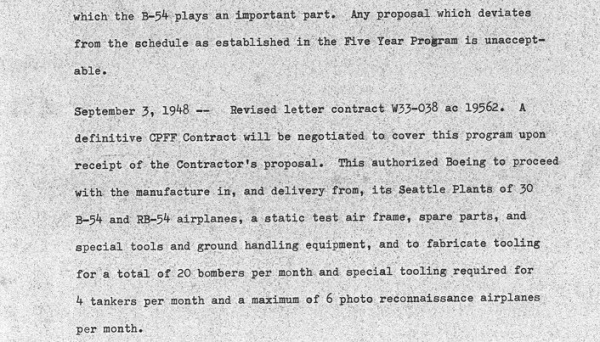 On September 3, the USAF instructed Boeing to tool up to be able to build thirty airframes a month. Everything seemed set for the B-54 to become a major part of the United States strategic bomber forces.

On April 18, 1949, the orders were all cancelled. Boeing were, as I’m sure you can imagine, furious. But the decision was final and the B-54 never saw the light of day. The one model under construction, the B-50C prototype was broken up, and that was that. 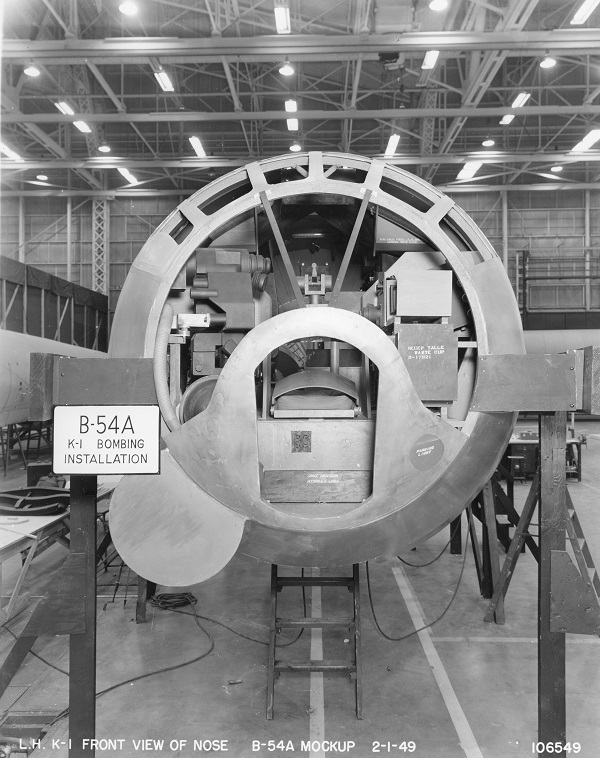 Well, a couple of things.

Firstly, in October 1948, Strategic Air Command was taken over by Curtiss Le May. He apparently was not happy about the state of things and set about shaking up the whole place. He also was not  a fan of the B-54.

Recognizing that it was basically an improved B-29, Le May couldn’t see the point of investing in what was rapidly to become an utterly obsolete design. Because even as the B-54 was being ordered, the new Convair B-36 Peacekeeper was entering service. And if the B-54 was big, the B-36 was titanic! 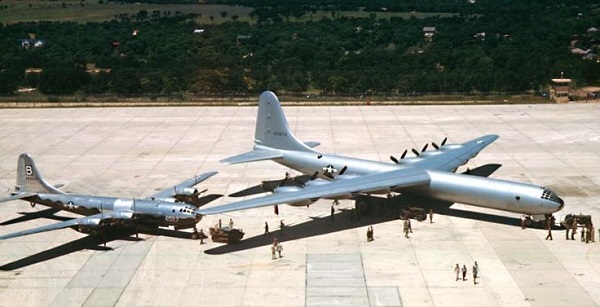 With performance that firmly put the Superforts in the shade, this was going to provide the United States primary strategic bomber for the immediate future, supported by the less capable B-29s and B-50s. Plus on the drawing boards was an even more formidable aircraft, one that would fulfil SAC’s strategic bomber requirement throughout almost the entire Cold War – the Boeing B-52. 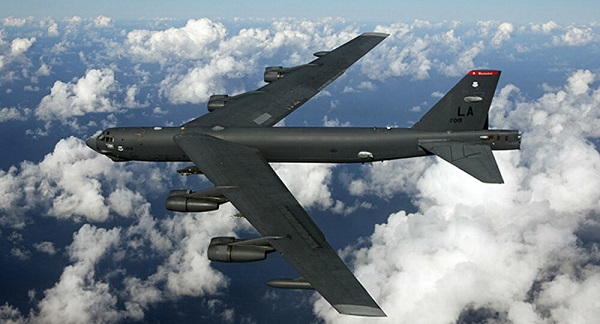 So really, the decision to drop the B-54, the ultimate Superfortress, really does seem like the logical choice.