An attempt to develop a high-performance aircraft, the Belyaev DB-LK was an innovative design that ultimately proved unsuccessful. With its name in English meaning “long-range bomber–flying wing,” the aircraft’s designer, Viktor Belyaev, worked on several Tupolev heavy bombers during the 1930s.

He then moved into experimenting with twin-boom designs. 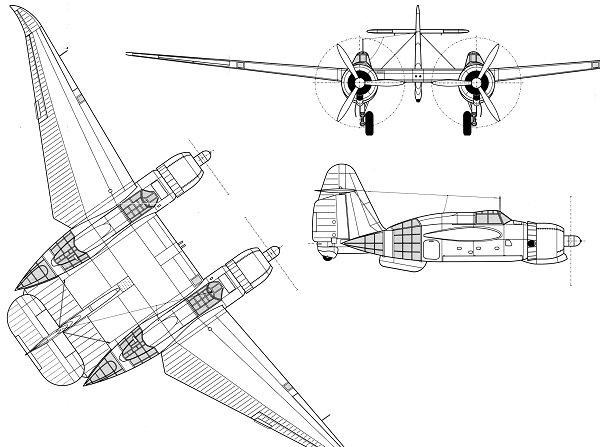 This ultimately evolved into his creating a transitional design that combined several features, merging a twin boom/fuselage with a tailed flying-wing concept and the swept-forward wings.

Originally conceived as a passenger transport, it was decided in 1938 to develop the concept as a potential high-speed and long-ranged bomber.

The DB-LK featured two fuselages, which are more like elongated engine nacelles. These were joined by a solid wing structure, which had a tall single cruciform tail, and housed the tail wheel. The airframe was of stressed skin construction while the wings were sheathed in aluminium alloy and the flaps had fabric coverings. 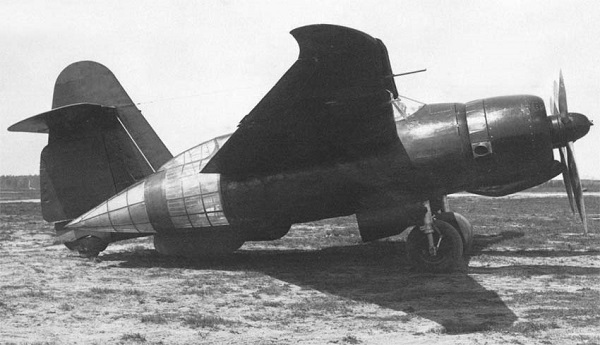 The fuselage-nacelles housed two crew each – a pilot and rear gunner in the left, the navigator and radio operator in the right. Both the gunner and the radio operator were seated in the rear of the nacelles, which due to their extensive glazing gave them excellent visibility. Each of these would apparently have been armed with two ShKAS 7.62mm machine guns in a rear and mid-position. 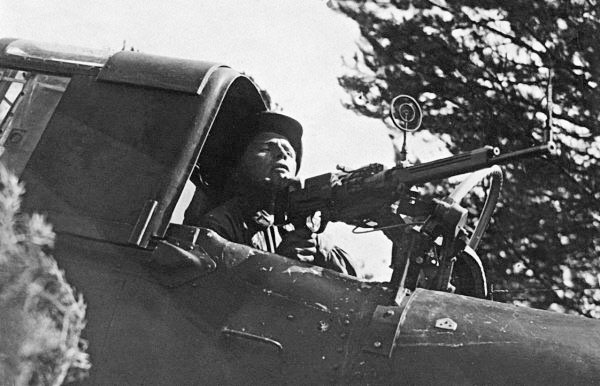 As these each would have had a rate of fire of 1800 rounds per minute, it was thought that any fighter that may have attacked a DB-LK would have faced a considerable amount of defensive fire.

Two additional machine guns would be fitted in the centre of the wing, providing the pilot with an offensive capability. Bombload was anticipated to be 1000kgs – 2,200lbs – as standard load, carried internally, though it was considered that 2000kgs was possible carried externally should the aircraft have actually got into service.

Initially, it was hoped to power the DB-LK with two Tumansky M-88 radial engines, which were in development at the time. However, issues with these meant that when the prototype was delivered in April 1940 to the Soviet Air Force Research Institute for testing it used two M-87B engines. These produced 950hp each.

The unconventional appearance of the DB-LK drew a great deal of comment and interest from test pilots, technical staff and ground crews assigned to the Institute.  However, testing proved unsuccessful, both due to bad luck and to flaws in the aircraft design. The Institute was at the time reconstructing its airfield and new strips were in use. Unfortunately, in one of its first taxi tests the DB-LK struck an unobserved stump that hadn’t been cleared properly. This blew a tyre but was quickly repaired and testing resumed.

The aircraft showed some alarming flare characteristics, no doubt the product of the huge wing area. Flight testing also showed that performance was not what was hoped for. Projected performance had been for a maximum speed of 340mph and a maximum range of almost two-and-a-half thousand miles with a 1000kg bombload. But with the lower powered engines, the DB-LK only managed a maximum speed of 303mph unladen. This offered no real advantage over the existing designs in service with the Soviet Air Force at the time.

In fact, the DB-LK was in many ways considerably worse, even dangerous. While the prototype was able to be handled by the experienced test pilots, it was reported to have a high landing speed, long takeoff run and have some erratic handling qualities. This was attributed to the centre of gravity being towards the rear of the aircraft. Some modifications were made, mainly in the adding of lead ballast, but the test pilots also complained of some other significant faults.

The rear positions and the navigator’s area were extremely cramped, to the extent that the crew manning the rear guns would not have been effective. Both the pilot and the navigator had poor visibility and with the DB-LKs flying characteristics it probably would have been a highly dangerous aircraft for inexperienced pilots. But perhaps worst of all was that the crew compartments tended to fill with exhaust fumes. And we are not talking about a bit of a whiff here, the concentration was so bad that a long flight would have to be conducted wearing oxygen masks the entire time. For this reason, the ultimate range of the aircraft was never ascertained.

And so, the DB-LK was refused permission to continue development. A logical choice, considering that did nothing better than the in-service aircraft, which performed without the need for bizarre flight characteristics or gassing the crew. But the design continued to interest the leadership of the Soviet Air Force, who later asked if the DB-LK could be redesigned as a dive bomber.

So, a study was launched to examine this issue, which is somewhat odd as the Soviets at the time were fielding the Pe-2 in the role – an outstandingly good aircraft. Again, nothing came of it and the DB-LK vanished, apparently destroyed during the Second World War.

But though it proved unsuccessful, the DB-LK probably deserves to be better remembered. Very much a transitional design, the aircraft demonstrated several concepts that have since been developed and proven extremely advantageous. But, as with so many ideas that occurred before their time, the technology of the day not only made the DB-LK unsuccessful, but also a menace.

Despite that, it is a rather intriguing forgotten aircraft.