The 1930s saw a veritable explosion in aircraft development. New techniques in aircraft construction and rapidly improving powerplants meant that the effective life span of many military aircraft was measured in a handful of years. Recognising this, the Royal Air Force was basically issuing specifications for new aircraft before the previous requested one was even in service.

Specification P.13/36 was a classic example of this. Issued in 1936, this called for a new twin-engine medium bomber for “worldwide use” that would supplant the aircraft that were just then prototyping for the same role – the Armstrong Whitworth Whitley, Handley Page Hampden and Vickers Crecy (which was subsequently renamed the Wellington). 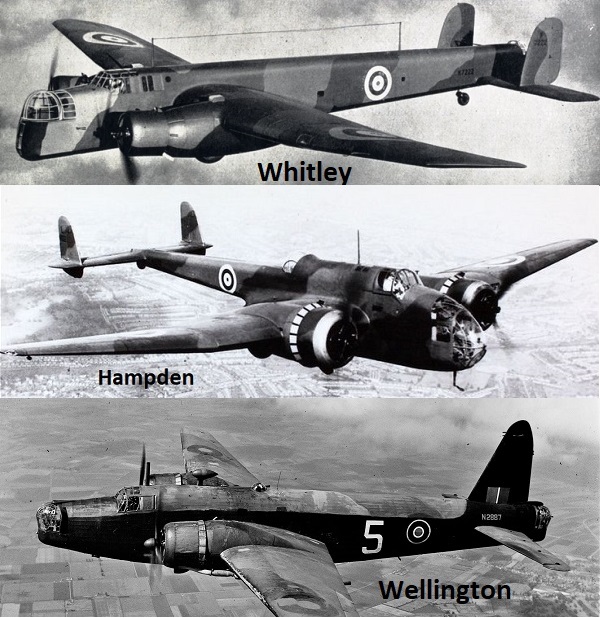 The new aircraft was to have a cruising speed of 275mph at 15,000 feet and carry a minimum bombload of 8,000lbs or two 18-inch torpedoes. The specification also called for the ability to conduct shallow dive bombing and be capable of catapult assisted launch, though these requirements would be dropped later.

Potentially a huge contract, most of the major British aircraft builders submitted designs, but in early 1937 the Air Ministry announced that they had selected the winner. The Avro Type 679 – subsequently named the ‘Manchester’. 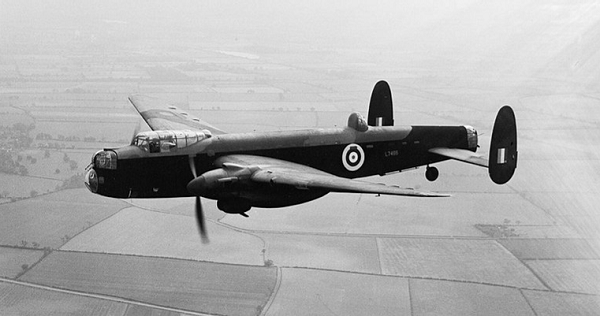 However, because they did not want all their eggs in one particular basket, they also commissioned the Handley Page HP.56 design as a backup. Because of the concerns over the situation in Europe in mid-1937 the Air Ministry ordered both designs straight off the drawing board before the prototypes were even built.

The Manchester appeared to have great potential. Avro had begun preliminary development work even before the awarding of the contract and so was able to deliver the first prototype in 1939. The aircraft was built with an emphasis on toughness and repairability. 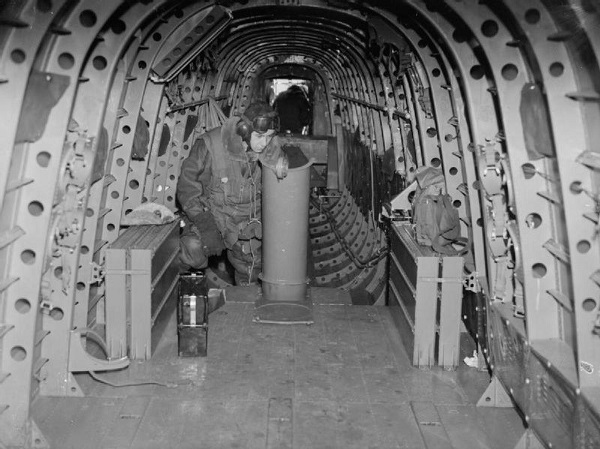 Its fuselage was constructed with a gridwork of longerons and stringers throughout, covered with an aluminium skin that was flush riveted. The production Manchester’s would also have armour plate for the crew and self-sealing tanks in the wings.

Avro looked at several different engines to power the Manchester, including the Bristol Hercules and Centaurus radials. But ultimately, they settled on the Rolls Royce Vulture. This was a 24-cylinder X-block engine that represented the very latest in development. Designed to produce 1,750hp – at a time when top-end service fighter engines were producing 1,000hp – the Vulture looked to perfectly match the needs of the future high-performance twin-engine bomber. 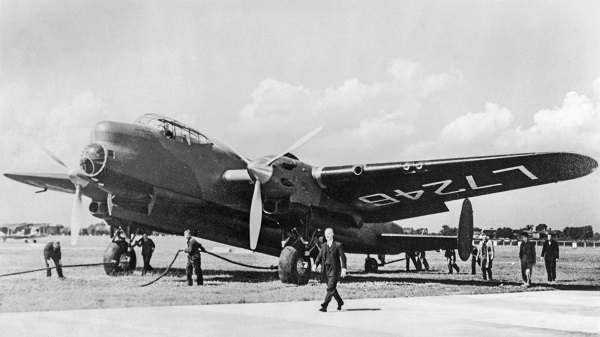 The second Manchester prototype flew in May 1940, and this was fitted with the initially proposed defensive armament of front, rear and ventral Frazer Nash turrets, each fitted with two 0.303 machine guns.

Because of the rapid decision to order three hundred Manchester’s for production in 1937, this barely got into testing before the first production aircraft was delivered in August 1940. These, the Mk.I Manchester, switched the armament to twin-gun turrets in nose, dorsal and tail turrets. 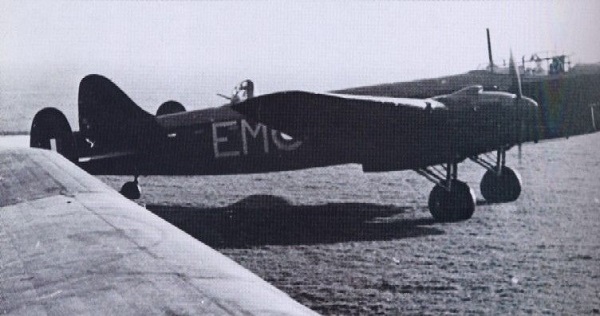 Rather distinctively, issues with the twin-tail meant the Mk.Is, of which twenty were built, were fitted with a large vertical stabiliser. However, even as these were under construction the improved Mk.IA started building alongside them. These reverted to the twin-fin system but used taller fins and rudders mounted on a new tailplane, which had its span increased by 50%. The MK.IA also altered the armament to twin .303 Browning machine guns in nose and dorsal turrets and a four-gun tail turret. Maximum bombload was 10,350lbs in the huge bomb bay that took up the majority of the fuselage. 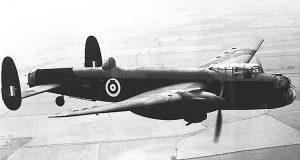 By this point the Second World War was raging, the British Army had been driven from the Continent and Bomber Command was the primary way for the UK to strike at Germany. The need for the Manchester- a powerful and fast bomber – was critical.

Orders for the aircraft had been substantially increased, with a total of seven hundred now to be produced on four major production lines. As a result, qualification into the RAF was fast and on the night of the 24/25 of February 1941, the Manchester went into action, bombing the French port of Brest.

And it soon became apparent that the aircraft was a total lemon.

In fact, that had been expectation for a while, but desperation to field as many modern aircraft as possible had driven the Manchester along.

The problem lay in the Vulture engine. As said, this represented the cutting edge in powerplant development when it first ran in 1937. Unfortunately, it was just too complex for the technology of the time. Composed essentially of two Kestrel V-12 engines powering a common crankshaft, the Vulture proved prone to catastrophic failures.

Initially, the engine was derated to 1,400hp to try to prolong lifespan, but even this proved ineffective, and the Vulture doomed the Manchester. Reliability was so bad that the aircraft were grounded in April 1941 as attempts to deal with the high incidences of bearing failure took place.

This had to be repeated in June, and the RAF was having to resort to using aircraft like the Handley Page Hampden that the Manchester had been intended to replace.

In November 1941 the Manchester was cancelled. Total production had been two prototypes and two hundred production aircraft.

Its service record reflected its unfortunate powerplant choice. Of the 193 aircraft that saw operational use, seventy-eight were lost in action. Another 45 were lost in accidents, of which thirty involved engine failures.

In other words, in the midst of a major conflict, 37% of Manchester’s were lost due to their terrible engine.

Manchester’s flew 1,269 sorties with Bomber Command, dropping 1,657 metric tonnes of bombs. Flying their last operation against Bremen on 25 June 1942, the Manchester had a front-line life of only eighteen months and paid a heavy price for it in aircraft and crew. But despite a dreadful record, the Manchester was too prove hugely successful – sort of.

Remember how I said earlier that Handley-Page had been asked to build their aircraft as a back up to the Manchester?

Well, in 1937, and recognising even back then that the Vulture might prove a problem, they redesigned their aircraft to take four lower-powered engines instead. This led to the development of the Handley Page Halifax heavy bomber, which entered service in November 1940. This would provide the RAF with one of its most important aircraft for the bomber offensive against Germany – but it also pointed the way for another aircraft that would ultimately become a legend.

With problems all too apparent with the Manchester, Avro and the Air Ministry needed to find a solution fast. If the Halifax could be redesigned for four engines, maybe the Manchester could to? After all, the aircraft had many excellent attributes, only being let down by its engine.

So Avro took one of the early Mk.I Manchester’s and modified it to test the idea. Designated the Manchester MK.III, this aircraft was a tremendous success, vastly superior to the other Manchester’s. 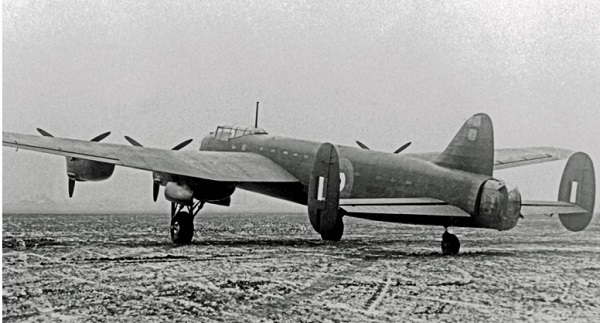 So the decision was made to switch production to the new aircraft – including altering the Manchester’s being built already. It was also decided to give the new aircraft a new name to distance it from its unfortunate forebear.

I’m guessing you’ve heard of it.

And here lay the final service that the Manchester provided. As the aircraft was essentially identical to the Lancaster in crew layout and equipment, the Manchester was able to serve on until 1943 as a familiarisation trainer for aircrew transitioning to the new heavy bomber.

And that is the story of the Avro Manchester – a graphic example of how the line between a terrible aircraft and a great one can be very fine indeed.