With the development of aircraft absolutely rocketing along during the 1920s and ‘30s, many smaller air forces had issues trying to keep up. The Swiss Air Force was no exception. A neutral country, the Swiss needed a reasonable amount of airpower to ensure that neutrality in the event – prescient as it turned out – of future European conflicts.

Recognising the need for a reconnaissance and light attack aircraft, the Swiss licensed produced the Fokker C.V, which entered service in 1933. However, by 1935 it was apparent that these were already outdated, and a call was issued for a new design. 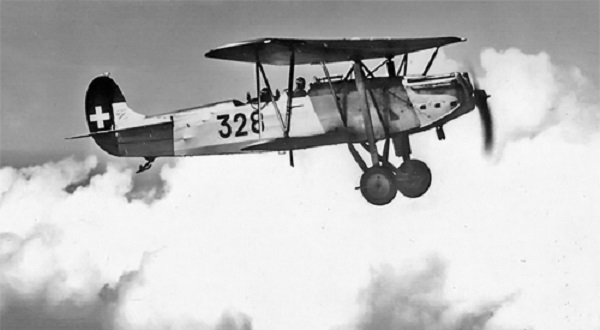 The Swiss Federal Construction Works (EKW) put forward two designs for consideration. The first – the EKW C-35 – was a biplane that offered modest improvements over the C.V in speed and armament. This was initially selected and about 90 ultimately were produced and served with the Swiss Air Force.

The second design, the C-36, was a much more ambitious aircraft. A low-winged monoplane, the C-36 had a single engine and a two-man crew. The Swiss decided against it, and instead tried to procure foreign twin engine aircraft, principally the Messerschmitt Bf 110 from Germany or Potez 63s from France. This came to nothing, however, and in 1938 it was decided to proceed with the C-36.

Two prototypes were built, the first flying on May 15, 1939 and equipped with a licence-built Hispano-Suiza 12Y engine producing 860hp. The second model was equipped with a more powerful engine version that produced 1000hp. It was this that would be selected as the basis for the initial production model. 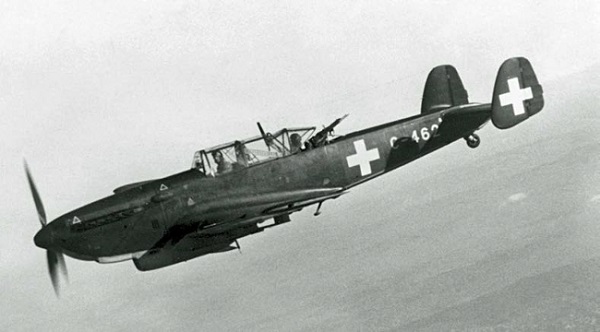 Looking like a cross between a Bf 110 and a Dewoitine D520, the C-36 was envisaged as a multirole aircraft, capable of both ground attack, reconnaissance and even of acting as a fighter. The main production model was designated as the C-3603 and these aircraft had a retractable undercarriage, something the prototypes did not. Armament was a 20mm Oerlikon cannon firing through the engine block, two 7.5mm machine guns in the wings and twin machine guns in the rear cockpit for the observer. They were also able to carry 400kgs – that’s 880lbs – of bombs.

The C-3603s top speed was listed as 296mph, which wasn’t too terrible when compared to other attack aircraft of its day. These entered service in 1942 and were soon in use patrolling the skies over Switzerland, supplementing the Bf-109 and licence-built Morane fighters that were the mainstay of Swiss air defence.

This was a serious business. Under the Geneva Convention the Swiss – to maintain neutrality – were supposed to deny use of their airspace to warring nations and either warn off or shoot down any such intruders.

The reality was somewhat more nuanced than that, but by 1943 Swiss aircraft did occasionally shoot down Allied aircraft in their airspace, which is somewhat understandable when Allied bombers occasionally hit Swiss cities by mistake.

It was not all one way. On September 10, 1944, a USAAF P-51B Mustang bounced two C-36s that were on patrol. The pilot, 2nd Lt. Kenneth L. Hobson, was credited for the kill of an “unidentified aircraft” but the Swiss record both of their aircraft returned safely – if no doubt somewhat upset.

In total 158 of the C-3603s were built, with an additional thirteen C-3604s, which had an additional two 20mm cannon mounted in the wings. Total production was 175, including prototypes and trainer aircraft.

After the war the C-36s continued in their attack role but were soon relegated to target towing and reserve duties as supplies of aircraft like the De Havilland Vampire and Venom were introduced. However, this was not the end of the aircraft.

In 1967 the Swiss Air Force determined that their C-36s still had at least a decade of use in them, although the old engines were just about worn out. So, they fitted new Lycoming T53 turboprops and a vertical stabiliser to the old C-3603s and produced a new model – the C-3605. 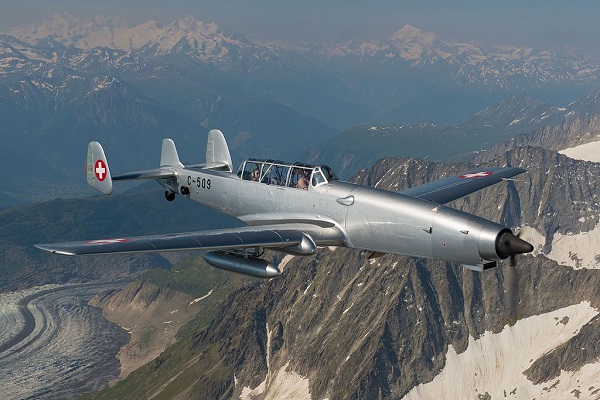 Twenty-four conversions were made, and these entered service in 1971. They continued providing target-towing services to the Swiss right up until 1987 and a couple are still flying today in civilian hands.