The Saab Viggen – which broadly translate as “Thunderbolt” – evolved from a 1960s requirement from the Swedish Air Force to replace both the Saab Lansen in the attack role and the Draken as a fighter/interceptor.

Preliminary design and experimental work were conducted in the 1950s, and things were boosted in 1960 when the Eisenhower administration signed a defence agreement with Sweden. This not only offered U.S. military assistance to the Swedes in the event of an attack by the Soviet Union, it also gave them access to cutting-edge aeronautic equipment for use in their indigenous aircraft.

This would mean the overheads of the Viggen program would be vastly reduced by cutting a lot of the development costs, but this would be largely plowed back into the program to allow the Swedes to create what was at the time the most advanced combat aircraft being built in Europe.

Four initial versions of the Viggen would be built – the AJ 37 attack aircraft, the SH 37 for maritime strike, the SF 37 reconnaissance variant and the SK37 two-seat trainer.

These all prototyped and entered service in the late-1960s and early 1970s, while the final variant was being developed. 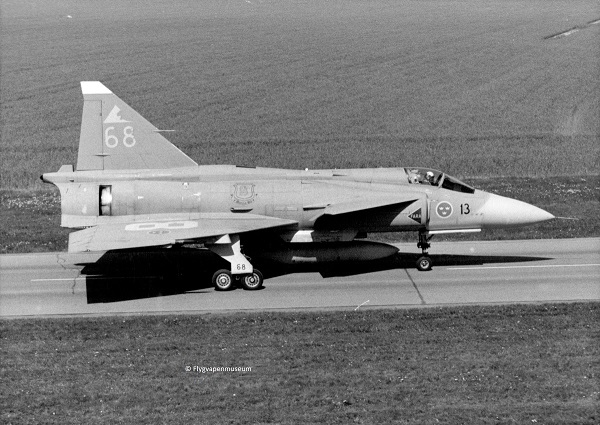 This was given development authorization in 1972 by the Swedish government, and the first prototype flew in 1974.

In appearance, it can be difficult to tell the -JA from its -AJ attack-orientated sibling. Both use a canard-winged tailless delta design, in common with all the Viggen’s, and the same basic airframe constructed of aluminium in a bonded honeycomb structure.

This makes sense, as all the Viggen’s were built to a high-performance specification that meant that they had to be capable of Mach 2 at altitude, Mach 1 at low level and of operating off extremely short strips or even civilian roads as runways.

This was the reason for the adoption of the canard configuration. In contrast to later fighters that have adopted this largely for combat maneuverability, the Viggen’s requirement for excellent STOL abilities means the large canards provided huge additional lift for landing and take-off. 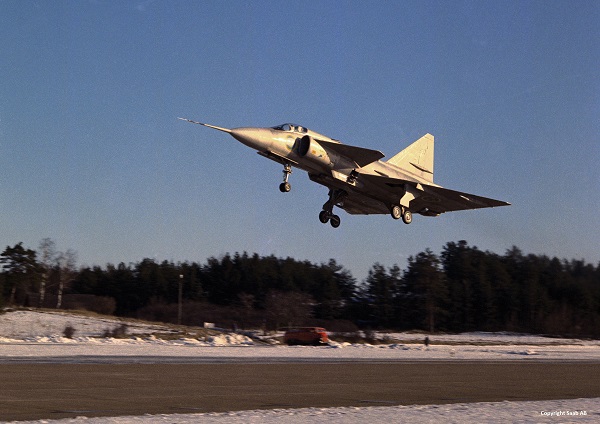 In fact, in terms of air combat manoeuvrability, the -JA suffered as other previous delta-wing fighters had from high drag in hard turns and was very much in a middle category as a dogfighter between the earlier F-4 Phantom and the later Teen-aircraft and the MiG-29 and Su-27.

It did have a few airframe tweaks over the earlier variants to improve the aircraft for its role as a fighter. Structurally, the -JA was reinforced to cope better with the stresses of air combat. The main wing also had an additional flap to improve manoeuvrability, and the fuselage was 100mm longer than the other variants.

The JA 37s differences were largely hidden internally in an electronic suite designed to make it an extremely capable air supremacy fighter. 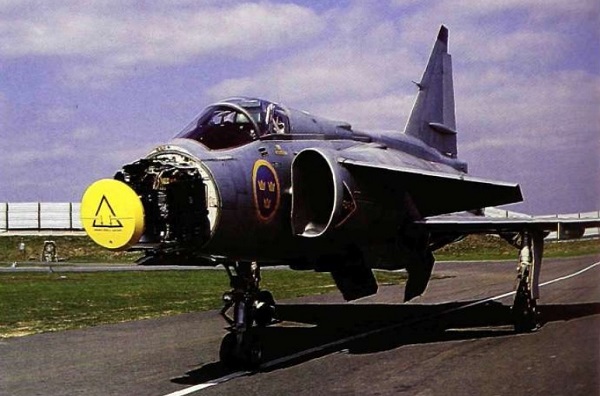 This had a publicly stated range of 30 miles (48 kms) and provided the JA 37 with a look-down/shoot-down capability and was totally state-of-the-art at the time.

Additionally, SAAB were able to integrate cutting-edge navigation systems, digital processors and one of the first automatic flight control units to go into production anywhere. They additionally were able to use the same digital air data computer as the F-14 Tomcat, which was itself just coming into service – shows how close the Swedes and United States were on technology exchange.

The JA 37 also used a more powerful version of the Volvo RM8B turbofan than the other variants. This engine, a licensed built Pratt & Whitney JT8D with substantial modifications, produced 28,100 lbf (125KN) in afterburner, making it the second most powerful fighter aircraft engine in use at the time after the MiG-23s Tumansky R-29.

The -JA also differed in having a partial glass-display cockpit, featuring a head down display and a tactical display for the pilot. And, with its focus on air combat, the JA’s weapons were much superior to the strike variants of the Viggen.

The primary weapon was the Skyflash, a British improvement on the American AIM-7 Sparrow radar-guided missile. This was built under licence in Sweden as the RB71, and two could be carried under the JA 37’s wings. This was supplemented by up to four Sidewinder heat-seekers, which were also built in Sweden under licence. 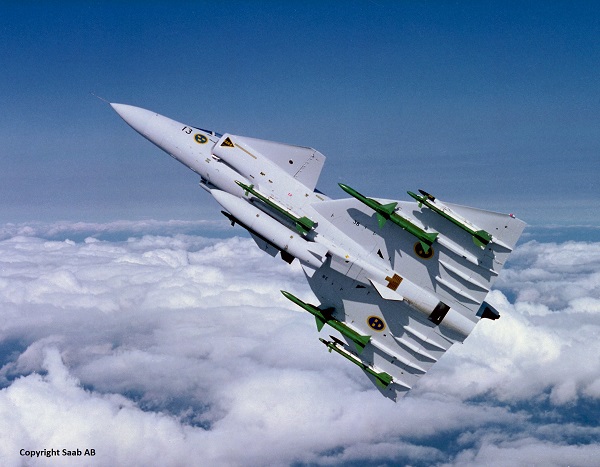 Initially these were the AIM-9B and -J variants but would be replaced by the more capable AIM-9L during the Viggen’s service life.

Additionally, the -JA featured a much more powerful cannon than the earlier models. The AJ 37 was not fitted with a fixed cannon, instead having the option of carrying twin under fuselage pods each fitted with a 30mm ADEN cannon. The JA 37 swapped this for a cannon fitted in a belly pack that was offset to the left.

This carried a single Oerlikon KCA 30mm cannon which was considerably more powerful than the ADEN. Firing the same shells as the fearsome GAU-8 rotary cannon on the A-10 tank buster, the KCA was a very hard-hitting aircraft cannon.

The fighter also retained some ground attack capability, but this was largely limited to air-to-ground rockets and dumb bombs.

The JA 37 entered service with the Swedish Air Force in 1980 and proved to be a formidable addition to the service, gradually replacing the Draken as the primary interceptor. They were certainly kept busy. With the Cold War taking a turn for the tense in the 1980s, the Swedes found themselves effectively on the front line of the intrusions launched by both sides against one another. 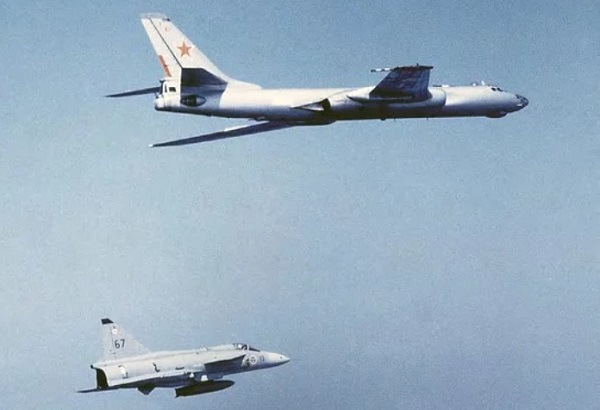 But while Soviet aircraft were constantly testing the Swedish Air Force’s ability to defend their air space, there was another intruder that routinely passed close to Sweden and which the JA 37 pilots were keen to test themselves against.

American SR-71 Blackbird’s routinely ran what was nicknamed the “Baltic Express”, flying a loop in international airspace over the Baltic Sea to conduct recon missions on the Polish and Soviet coastlines. As the fastest aircraft in the world, these were extremely difficult aircraft to intercept and the Swede’s Draken’s had proven incapable of the job.

The Viggen changed that. With its powerful engine and, more importantly, advanced radar and electronic counter-counter measures, the Viggen did prove capable of intercepting the SR-71 and achieving a lock, despite the American aircraft’s electronic jammers.

And on one occasion in 1987, JA 37s intercepted a Blackbird with engine trouble and effectively escorted it out of the Baltic, handing it off to USAF F-15s.

The USAF were impressed with the Viggen, and admitted that:

“The JA 37, if carefully managed, could provide the performance to reach within striking range of an SR-71.”[i]

As pointed out by the USAF, Blackbird interceptions were achieved under the most favorable of circumstances, but this still showed how competent an aircraft the Viggen was. The success is also attributed to another system that was integrated into the Viggen – The STRIL 60.

This was one of the first digitally data linked air defence systems to enter service and during the 1980s both it and the JA 37 underwent regular updates. This meant that the aircraft and the air defence network interacted with greater efficiency and integration as the decade wore on, leading to the ability for a single Viggen to illuminate targets for three other aircraft to engage with their missiles whilst staying passive.

Attempts to market the aircraft were ongoing throughout the aircraft’s lifespan, including an attempt to win orders from the United States Air Force in the Lightweight Fighter Competition, which ultimately was won by the F-16.

There was also a serious possibility of licensed production being undertaken in India, though I think this was the attack variant. However, had the sale not been blocked by the US due to technology transfer concerns, it is completely conceivable that the IAF might well have decided to build fighter Viggens of their own.

Despite the lack of sales, the Viggen remained the primary fighter aircraft of the Swedish Air Force into the 1990s. Although the new Saab Gripen would start to replace the Viggen in all roles from 1994 onwards, the Viggen would remain a critical aircraft for another decade.

This led to the creation of the JA 37D and Di models, which saw major overhauls of the aircraft’s electronics. Most notable of these upgrades was the ability to carry and use four AMRAAM missiles in place of the older Skyflash’s. 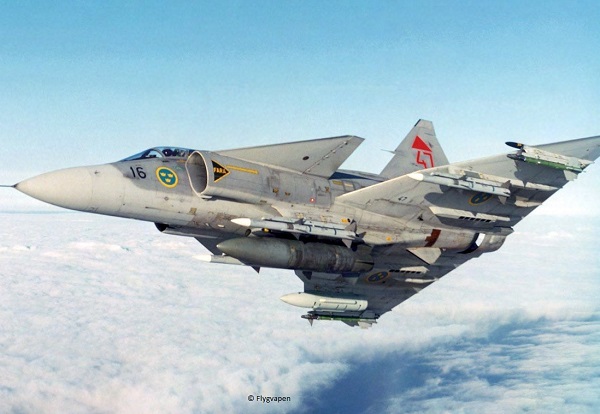 The JA 37D would provide not just an updated fighter for the Swedes, but also a useful transition type to the new Gripen’s. But the newer fighter, built firmly in the tradition of the Viggen as a cutting-edge aircraft featuring the best available technology, displaced the old Thunderbolt’s in service by the mid-2000s.

Now the Viggens are to be found languishing in museums, though several are kept air worthy for displays.

And one day, I hope very much to see one flying myself.