I’ve mentioned in previous articles how some western aircraft designers thought during the 1950s that the ever-increasing size and cost of fighter aircraft was unsustainable. Broadly, the thinking went that such expensive aircraft would not be feasible for sustaining anything but the briefest war. This in turn led to the development of aircraft such as the Folland Gnat and the Northrop F-5 series.

Though these aircraft may not of had the best performance or capabilities, the idea was that at least they would be available and competent enough for the job. Similar thinking in the so-called “fighter mafia” of the United States Air Force in the 1960’s and 70’s, played a role in the creation of the F-16 – though that aircraft evolved into something very different than was envisaged.

Of course, the concerns on fighters’ size and expense weren’t limited just to the Brits and the Americans. Most countries dabbled with the light fighter concept, some being adopted and some simply laying the groundwork for successors.

And amongst the latter was the Nanchang J-12.

This aircraft was developed in the light of Chinese assessments of the air combat taking place over Vietnam between the forces of the United States and the North Vietnamese. The initial idea was that the Chinese needed a new “guerilla fighter” capable of operating off short, rough strips to ambush enemy aircraft. This was based on a tactic used by the North Vietnamese Mig-17s and -21s against American aircraft.

The Chinese expected that in the event of a major conflict with either the Soviet Union or the United States – which in the mid-1960s were both possibilities – they would need to operate in this fashion against technologically superior opponents.

Additionally, though the People’s Liberation Army Air Force (PLAAF for short) had started receiving Shenyang J-6 fighters in the early 1960s – a copy of the MiG-19 – they were keen to begin development of a replacement.

The concept was worked on by both the PLAAF and Chinese aircraft companies and in 1969 an official requirement was issued.

In response both Shenyang and Nanchang put forward proposals, but the latter was chosen to proceed.

The prototype J-12 first flew in late December 1970 and seemed to fulfil the requested performance.

This was achieved by using some advanced techniques such as composite structures, the first time they were used on a Chinese aircraft, as well as some use of titanium.

This meant that though only powered by a single Wopen WP-6 engine, a derivation of the engine used on the J-6 – which used two engines – it was capable of breaking Mach. The sources, which are admittedly sparse, state that the J-12 was capable of a top speed of between Mach 1.2 and 1.4.

With its low mounted swept wing and nose intake, the J-12 looks a bit like a miniaturized F-100.

Naturally, the compromises in making the aircraft so small and light counted against it in other ways. Fuel was extremely limited and there was no room for a radar.

Following the two original aircraft between three and six additional prototypes were then built to an improved version – designated either the J-12A or -I. 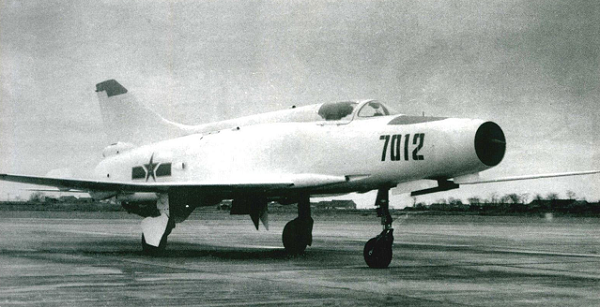 These had a revised shock cone, similar to the Chengdu J-7/MiG-21, an area-ruled fuselage and some other tweaks, and began testing in 1975. Flying against the J-6, which had by the early 1970s become the backbone of the Chinese Air Force, it apparently proved superior in manoeuvrability. 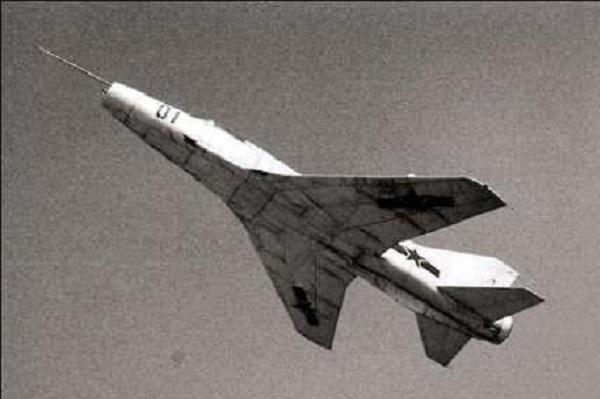 That’s quite impressive, as the J-6 has quite a reputation for being a capable dogfighter.

For armament the J-12 had two cannon – either 23mm or 30mm, or according to some sources, one of each – plus the ability to carry two heat-seeking PL-2 missiles.

Testing continued until 1977, but things were changing both politically and technologically. For starters, the Chinese were rapidly building the Chengdu J-7, their version to the MiG-21.

This was becoming the major type in service with the PLAAF and, though it didn’t fulfil the “guerilla fighter” spec that the J-12 had been designed to, it was a far more capable fighter.

Additionally, it was recognized that with new Soviet and American aircraft like the MiG-23 and the “Teen-series” coming into service, the J-12 was hopelessly outclassed. Also, the thaw in relations with the United States meant that some access to Western technology was occurring and offered the prospect of the Chinese building much more capable aircraft.

In 1977 the decision to cancel the project was taken, and development stopped.

At least one J-12 remains on display at the Chinese Aviation Museum.

But though it didn’t get adopted, the J-12 represented a major leap for China’s aero industry. Up until its development, most of the country’s aircraft had been copies or derivations of other countries designs. With the J-12, China’s aircraft designers really began to push their limits and just want it was capable of.

As a result, the J-12 represents an important step in the development of the Chinese aero industry.