The Ilyushin Il-2 is an aviation legend with few equals. Developed as an armoured ground attacker and known as the “flying tank” because of its heavy armour, the Il-2 essentially set the standard for this type of aircraft. 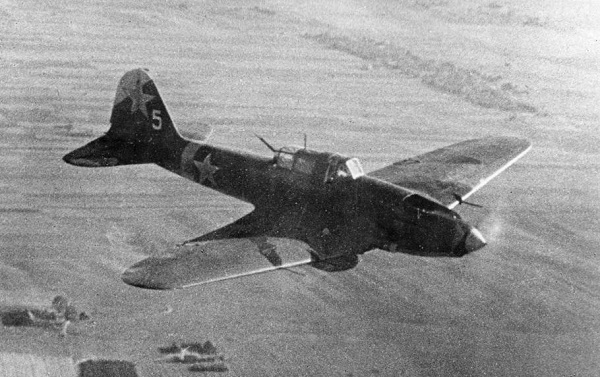 Tough, heavily armed and capable of tearing through ground units if unopposed, the Il-2 is as symbolic of the Red Army in the Second World War as the T-34 tank and the PPSh submachine gun. Indeed, it is the most produced combat aircraft in history with over 36,000 produced. In the words of Stalin himself, the Il-2 was “…as essential to the Red Army as air and bread.”

Of course, with so many in service with the Soviet air force and the sheer scale of the bitter combat being waged on the Eastern Front, there were several occasions when the Il-2 was pressed into use as a makeshift interceptor. While it was badly overmatched by dedicated fighters such as the Bf 109 or Fw 190, the Il-2 was an extremely dangerous opponent to ground support aircraft in German service.

These, generally armed with lighter weapons and armour than the Ilyushin, often could offer little resistance when attacked by the Soviet aircraft, which could dispatch them with ease with its powerful cannons. Additionally, the Il-2 proved a real menace to German transport aircraft and the slower bomber types that were in service in the first years of the war.

All of this led to an idea.

With Soviet fighters in constant demand to tackle the host of various requirements thrown at them, maybe the Il-2 could form the basis for a useful frontline armoured fighter?

The initial concept was drafted in May 1943. This conceived that a certain portion of Il-2 production could be diverted into a fighter variant that would do away with the rear gunner, making the aircraft a single seater and reducing the aircraft’s bombing equipment.

Ilyushin moved rapidly to comply with the request, taking a standard Il-2M3 off the production line and converting it. By July they had an aircraft ready for testing; the Ilyushin Il-2I, which stood for “istrebitel’ bombardirovschikov” (bomber destroyer).

This had the Il-2’s rear gunner position faired over, and the internal bomb bays sealed. The ShKaS machine guns were also removed, and armament reduced to just two 23mm cannon in the wings. Two bomb shackles for 250kg bombs were retained because it was envisaged that the aircraft could still fill a useful role as a ground attacker for dangerous targets such as flak gun positions in addition to its fighter duties.

But despite this, things didn’t go so well in testing. Maximum speed achieved was 258mph (415kph), which considering the normal Il-2 could achieve 250mph and was considerably heavier suggests that Ilyushin messed up somewhere in the design, probably in the streamlining of the aircraft.

The Il-2I could have performed the role of bomber killer, but the marginal increase hardly made it worth it. The existing Il-2M could do practically as well but retained greater versatility with its heavier weapon load.

Additionally, the fact that the early Il-2 models had originally been a single-seater but had had the rear gunner added after combat experience showed how terribly vulnerable the aircraft was to German fighters, meant that the Il-2I was very much a retrograde step; sacrificing versatility and protection for an insubstantial improvement in performance.

As a result, the plan to build the Il-2I was scrapped and focus remained on getting as many of the two-seat attack aircraft into the air as possible. But the idea of a heavily armoured single-seat fighter was not dead yet.

Instead, focus switched to a new aircraft to be powered by the new AM-42 engine that was just entering service. This boosted power to almost 2,000hp and this, combined with a properly designed airframe, was theorised to be capable of providing a front-line armoured fighter that could not just threaten German bombers, but even their most capable fighters!

Thus was created the Il-1.

Like its predecessor, this ensconced the pilot, engine and fuel tanks in an armoured shell that formed an integral part of the superstructure. However, improving on the Il-2, the -1 also squeezed the radiator and oil cooler into the citadel, greatly improving the aircraft’s survivability especially in the face of comparatively light defensive fire that the Il-1 would be expected to take from hostile bomber aircraft. Cooling was now achieved by wing inlet feeds while the critical components stayed safe inside the thick central shell.

Once again, two 23mm cannon was the selected armament, with two bomb mountings on the wing.

Streamlining was very much a key motivation in the design, giving the Il-1 a clean appearance, with even the tailwheel being retractable. 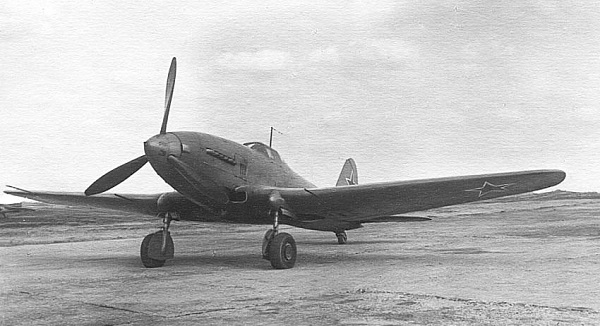 Further improvement over the Il-2 was the use of a new wing, which put emphasis on higher speed performance over the older aircraft’s lower-wing loading. Though the rear gunner was removed, the Il-1 retained one weapon that had been used on the Il-2 for dealing with fighters attacking from the rear: a jettison rack with ten AG-2 aerial grenades. 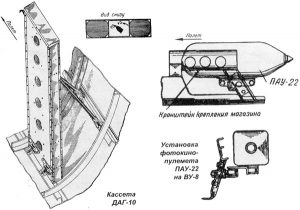 These parachute-fitted and time fused explosives would be dropped from the aircraft as it was pursued and detonate in the face of the enemy. Not many details exist in English on this countermeasure, but they are reputed to have been rather effective throughout the war.

All of improvements in the powerplant and in the aircraft design meant that finally, the Il-1 was the sort of aircraft that could meet the idea for an armoured fighter. In testing, a top speed of 360 mph (580 kph) was achieved, and at low altitudes, where its flight profile was optimally designed for, the Il-1 demonstrated that it had a turning circle better than the Bf 109G, one of the principle German fighters.

Indeed, the Ilyushin test pilots believed that up to an altitude of 4,000m (c.13,000 ft) the Il-1 would be capable of not just holding its own against the formidable Fw 190 fighter but besting it, with the Il-1 demonstrating very good handling and responsive controls.

Considering that this is a comparatively heavily armoured aircraft we are talking about, that is pretty impressive. But there was an issue, one that is a common feature in these forgotten aircraft…timing.

Flight tests of the Il-1 began in May 1944. By this point several new soviet fighters were in service that were extremely formidable, quite capable of taking care of air superiority and in mass production.

German frontline aviation, meanwhile, was being ground away by the unrelenting combat in both East and West, with the Luftwaffe being very much on the defensive.

As a result, there wasn’t really the need for a low-level anti-bomber armoured fighter with the Red Air Force any longer; existing fighters were more than capable of doing the job and instead the emphasis was on the offensive, where large numbers of attack aircraft would be at even more of a premium.

And so, the Il-1 was dropped even before it was submitted for state flying trials as redundant in role. But that doesn’t mean that the effort expended was a total waste. When design work on the Il-1 had begun Ilyushin had also begun development of a two-seat version alongside the single-seater.

This aircraft incorporated the improvements of the Il-1 with the heavy attack capabilities, rear protective gunner and heavier bombload of the preceding Il-2. Although several other new armoured attack aircraft were being developed by both Ilyushin and the rival Sukhoi bureau, when the new two-seat aircraft was tested by the Red Air Force it was considered the best aircraft available and ordered into full production to be the replacement for the fabled Il-2.

This new aircraft, the Il-10, would go on to serve for decades all over the world and continue to set the standard for the armoured ground attack aircraft.

OKB Ilyushin: A History of the Design Bureau and its Aircraft