The disparity in the sorts of bombers used by the opposing forces in the Second World War is a subject that is quite often discussed in military history circles. Whilst the Americans and the British deployed vast numbers of heavy bombers, the German Luftwaffe was constrained almost entirely to light and medium types which had a focus on tactical and operational support rather than strategic bombing. This is recognised as a fundamental difference in air power philosophies between the protagonists. 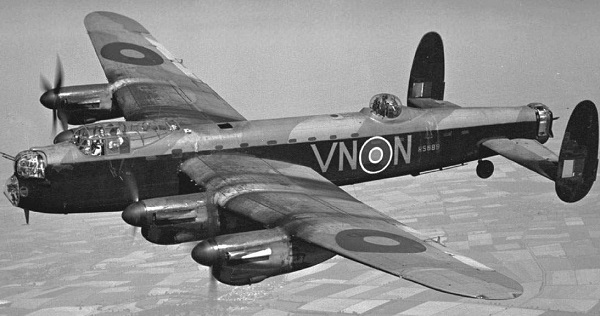 The Lancaster was the classic British heavy bomber of WW2, and much heavier and more capable than… 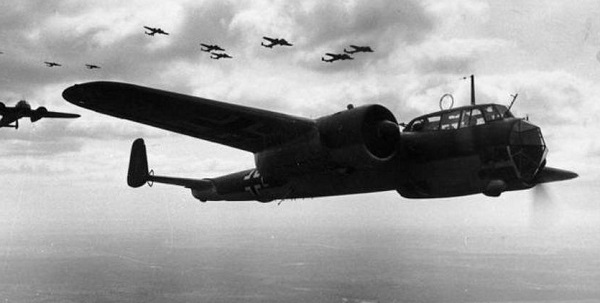 The Dornier Do 17, a classic German design that fit into their doctrine on using air power to support field formations

Though the effectiveness of the Allied bombing campaign is still a subject of debate today, the Germans, as the target for the massive fleets of bombers, certainly did not appreciate the destruction wrought and made strenuous efforts to counter them. It also led to some attempts by Nazi Germany to develop their own heavy bombers as the war raged.

This though, with their industry fully committed already to their current war production, was largely for naught and very little in terms of German heavy bombers would be produced.

And so, the history of the Second World War is marked by these very different respective takes on the employment of air power. But it almost didn’t happen that way.

Because it seems highly likely that Nazi Germany would have devoted itself to the concept of the four-engine heavy bomber and may well have led the field in this regard by the time war broke out in 1939. But for one incident.

This is the story of one man’s vision and one of the aircraft that sprang from it.

The man was General Walther Wever, the first Chief of Staff of the Luftwaffe. 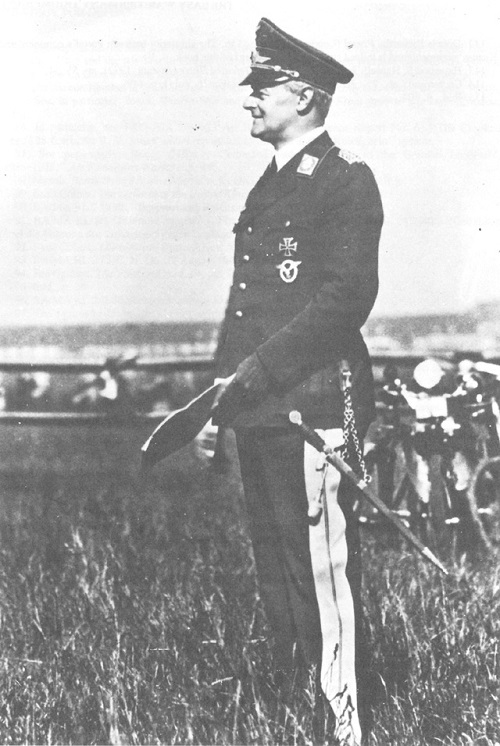 The aircraft is the Junker’s Ju 89.

When the Luftwaffe was officially created in 1935, this aircraft had in fact been in a process of development for a year. And the key person in this development was Wever.

A lifetime professional solider, Wever had served in the field and as a staff officer with the German Army High Command during the First World War, then stayed in the Reichswehr after the war. With the rise to power of Hitler and the massive expansion of the Luftwaffe, Wever was promoted to be effectively the strategist of how the new air force was going to be employed and, as a result, what sort of aircraft it was going to be equipped with.

For this, he had two main influences.

Firstly, Wever understood the message that Hitler was expounding in Mein Kampf was that the Soviet Union was the paramount foe for Germany.

Secondly, with an extensive background in military high command, he appreciated the necessity of strategy encompassing not just the tactical and operational facets of combat, but also the need to consider political and strategic objectives in planning.

As a result, he was deeply interested in the possibilities offered by the long-range strategic bomber and in the air power theories of Douhet. What Wever believed would be needed by the Luftwaffe for fighting the future war was the heavy bomber. This needed to be able to strike at Soviet industry hidden deep inside that country, possibly beyond the Ural Mountains.

In 1934 Wever held secret discussion with two of Germany’s foremost heavy aircraft builders at the time, Dornier and Junkers, where the groundwork for building a bomber capable of this role – the Ural Bomber – was laid. In 1935 Wever had both companies issued contracts to build prototypes of their proposals.

At this point, let’s look at what other countries were doing at this time.

The British in 1934 were just bringing their latest heavy bomber into service, the Handley Page Heyford, and were developing their next, the Fairey Hendon. It wouldn’t be until 1936 that the British issued a specification for a four-engine heavy bomber, which would eventually become the Short Stirling. This wouldn’t fly until 1938 as a prototype.

The United States were slightly ahead in their thinking as in 1934 they were issuing the specification for a new multi engine bomber which would go on to become the Boeing B-17 Fortress. The prototype of this, the Model 299, would fly in late 1935. 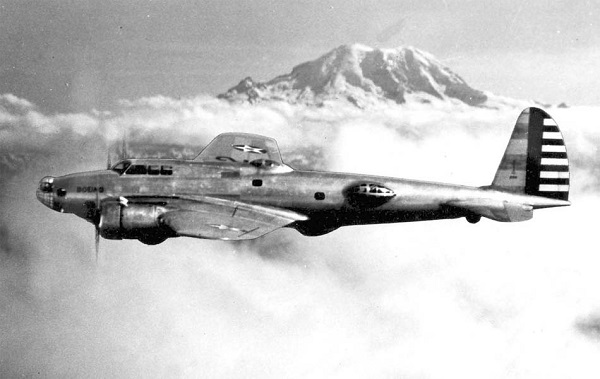 These projects were the basis of the huge bomber fleets both countries would use during the war.

Germany was therefore effectively running heavy bomber development programs at the same time as its two future enemies. And arguably with the Ju 89 had a potentially better aircraft. Projected armament was a single 7.92mm machine gun in both nose and tail positions, with single 20mm cannon also mounted in dorsal and ventral turrets. 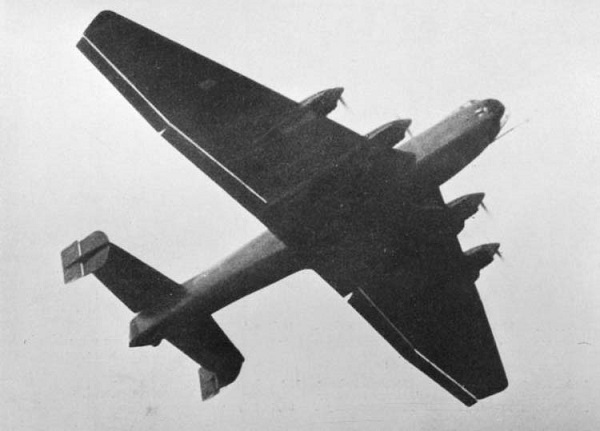 Bombload was expected to be 1,600kg (3,500lbs), which may seem small for a heavy bomber, but was broadly on par for designs at the time.

The Boeing 299 could carry 2,180kgs (4,800lbs), but its defensive armament of five .30-calibre machine guns, which was considered exceptionally heavy for the day and led to the “Flying Fortress” nickname, was inferior to the Ju 89.

Additionally, the Boeing had far less engine power. When the 299 first flew in July 1935, it used Pratt & Whitney Hornet radials that produced 750hp each.

When the Ju 89V1 first flew in December 1936 it was equipped with four Jumo-211A engines which produced around 1000hp each. Shortly after this the V2 flew, which had four Daimler Benz 600 engines that produced 960hp.

These liquid-cooled V-12s would see great development in the ensuring years; the Jumo 211 being built in huge numbers until the end of the war, the DB-series engines gradually improving into later models of much greater power.

As it was, the prototypes performance was certainly on par with contemporary aircraft of other nations. In testing the V2 recorded a top speed of 242mph (c.390 km/h). This compares with the Boeing 299’s top speed of 252mph (406km/h).

Though this is obviously in testing, it does demonstrate that the Ju 89 did have the potential to substantially improve on its bombload as the type developed, especially if more powerful engines had been fitted as would inevitably have happened had the aircraft got into service.

So, what happened? Change of management.

In June 1936 Wever was killed in an air crash, before either of the prospective Ural Bombers even flew. His death effectively killed the plans for a German heavy bomber.

Wever’s replacement as Chief of Staff was Albert Kesselring, who believed the direction that the Luftwaffe should take was with emphasis in supporting the field army. He was backed up in this by Ernst Udet, then Head of the Air Force Technical Office, who was vehement on dive bombing and the importance of using aircraft for tactical purposes.

Between them they were easily able to convince Goring of the change in direction that they wanted make, dropping any notions of heavy bombers and concentrating on lighter single-and-twin engine aircraft. Goring was under pressure from Hitler to build up the new Air Force quickly and so he was more than happy to authorise the change in doctrine, reportedly saying that:

“The Führer does not ask me how big our bombers are, but how many we have.”

As a result, he ordered the end of the Ural Bomber project on the 29th of April 1937 and that future efforts were to be concentrated on smaller, more economical types.

Certainly, the building of large number of heavy bombers would have been an additional burden on the German war economy, and a major diversion from smaller, more numerous aircraft that otherwise were built. But one must wonder what difference a large number of Ju 89s may have made on, for example, the bombing campaign on Britain.

By 1940 this aircraft would likely have been flying with engines producing 1,200hp and likely carrying far heavier bombloads and defensive firepower.

Would it have made a difference? Well, that is a subject for speculation. But what we do know is that the Ju 89 did leave some legacy.

Though they may not have wanted a heavy bomber anymore, Junkers did think the aircraft might make an excellent basis for a passenger aircraft. As a result, one of the Ju 89 prototypes was converted to be the first Ju 90, and a total of eighteen of these would be built for service with Luft Hansa. These in turn would go on to form the basis for the Ju 290, a long-range reconnaissance aircraft and bomber.

So, the effort put into the Ju 89 wasn’t totally wasted, but it will always remain an aircraft that will inspire debates about what may have been.