The Spitfire was the Royal Air Forces primary air superiority aircraft throughout the Second World War. Naturally, with so much technical development occurring during the six years between 1939 and 1945, the Spitfire design and performance changed considerably to stay viable as a front-line fighter.

The Spitfire Mk. Is of 1939 demonstrated a top speed of 362mph (583kph), were powered by a Merlin engine producing just over a thousand horsepower and had an armament of eight .303 Browning machine guns. 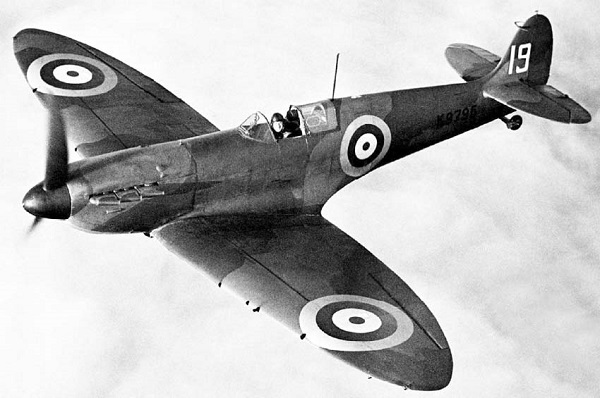 The final variant, the F. Mk.24 of late 1945 was quite a bit larger and weighed nearly 30% more fully loaded. But powered by a Griffon engine producing well over two thousand horsepower, it had a maximum speed of 454mph (730kph) and a far more formidable armament of four 20mm cannon. 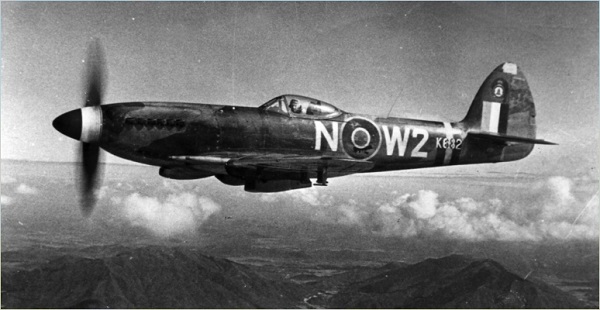 But despite its success and legendary reputation, the designers of the aircraft recognised that nothing lasts forever and that the fundamental design had flaws that if rectified could make the aircraft even more formidable.

In 1942 Supermarine started work on improving two of the main perceived issues with the Spitfire – the thickness of its wing and its narrow-track undercarriage. The main thing that was wanted was to fit a laminar flow wing to the design. This type of air foil was fitted to the P-51 Mustang and allowed a smoother airflow over the wing surface, which in turn meant less drag on the aircraft and greater potential speed.

The new wing was expected to be lighter than the Spitfires and provide improved roll rate in combat. It could also be designed for a broad track undercarriage that pivoted from the wings, not from the fuselage as was the case with the Spitfire and made landings more difficult.

In early 1943 the Air Ministry gave approval for the development, which took place under the leadership of Joe Smith. Smith had overseen the Spitfire’s development from the beginning of the war and was set on wringing every ounce of potential out of the basic design.

Despite the promise of the new design, the burdens of keeping the existing development and production programs for the Spitfire meant that the first prototype didn’t fly until June 30, 1944. This aircraft, NN660, was a Spitfire Mk.XIV modified to test the new wing.

The prototype proved indeed to be faster than the standard MK.XIV, but also demonstrated some vicious stall characteristics in comparison to the Spitfire, which was a forgiving aircraft. On September 13 tragedy struck when the aircraft crashed while testing in a mock dogfight with a Spitfire. Test pilot Frank Furlong was killed, and the cause was never definitely established, though the jamming of the aileron controls seems likely.

But lessons were learnt in improving the aircraft and in January 1945 the second Spiteful flew. This had what would become the actual Spiteful’s fuselage and shortly after first flight the Air Ministry ordered 150 of the new fighters. 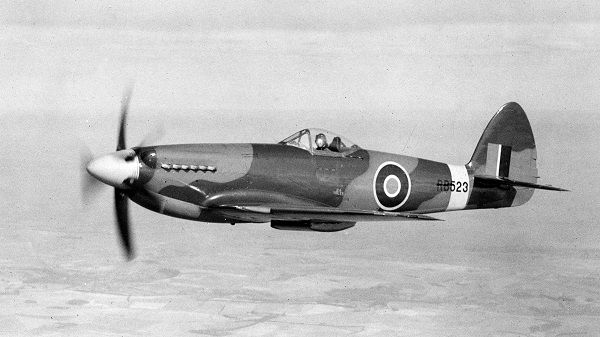 Tweaks still needed to be made and though the first production Spiteful flew on April 2, 1945, it needed to go back and be fitted with a larger tail that became standard for the type. Because it was seen as a progressive improvement on the Spitfire, the Spiteful’s never started from the Mk.I designation, instead beginning with the Spiteful F Mk.14 in line with Spitfire model it originated from.

The Spiteful F Mk.14 was indeed faster than the contemporary Spits. Powered by a Griffon engine producing 2,375hp, it had a top speed of 483 mph (777kph). 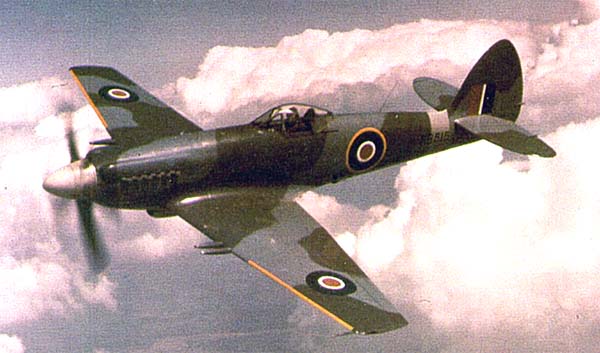 But the war was ending, and the Spiteful was in many ways unnecessary. The Spitfires continued to be perfectly capable of dealing with enemy aircraft, and in fact some of the design tweaks developed for the Spiteful would be applied to the late-model Spits. There was also the spectre of the new jets coming into service, that already showed the direction fighters were going.

In February 1945 orders for the Spiteful were cut to 80 aircraft. This was again reduced in May to 22 aircraft, and finally dropped to 16 aircraft in December 1945 – basically for the aircraft already completed and therefore ending production.

A final attempt to get the most out of the design was made in 1947 when one aircraft was configured to use a Griffon 101 engine with a five-bladed propeller. 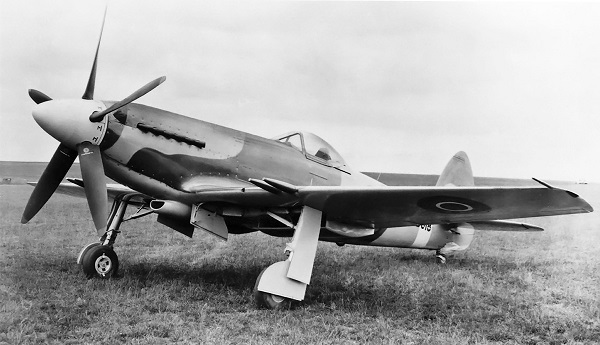 This aircraft, the sole F.16, demonstrated a top speed of 494 mph (795 km/h) at 27,800 ft (8,473 m), the highest level-flight speed recorded by a British piston-powered aircraft. Testing continued until 1949, but the F.16 was damaged in a landing incident and then completely written off when the recovery crane dropped it.

As with all the late war “super-prop” aircraft, the Spiteful was a remarkable aircraft that was basically obsolete as jets came to the fore. This was graphically demonstrated when discussions with the French to licence produce the fighter to rebuild their aero industry were dropped, with the French going for the De Havilland Vampire instead.

But there was also another potential route for development for the Spiteful design, and that was as carrier fighter for the Fleet Air Arm. In October 1943 Supermarine proposed a naval variant of the Spiteful. Little interest was expressed until March 1945 when the go ahead was given to begin development of the new fighter – designated “Seafang”.

This was literally a Spiteful modified for carrier usage – indeed, the first prototype was the Spiteful F Mk.15 converted to the new model. 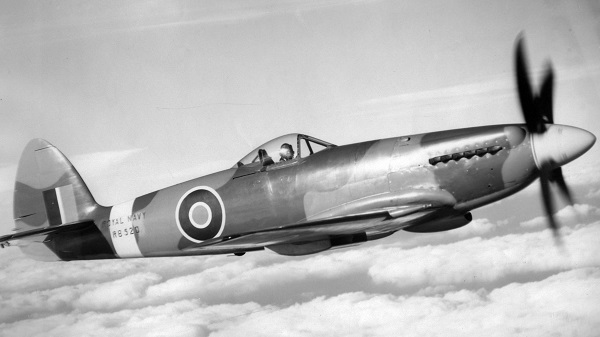 The principal changes in the production Seafang were to be incorporation of wings that allowed the last four feet to fold for stowage, a rounded front windscreen rather than the flat one used on the Spiteful, reinforced landing gear and a tail hook for snagging arrestor wires. However, the Seafang also featured some developments in terms of its propellor that would likely have been incorporated onto Spiteful if that aircraft had made it into actual service.

The first Seafang model was the F.31. 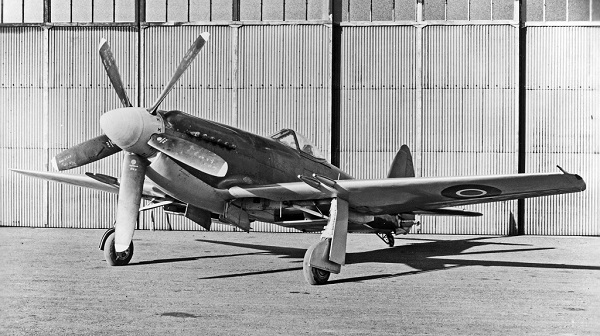 This was to be an interim model to get the aircraft into the FAA as soon as possible. The aircraft was essentially a modified Spiteful with a Griffon 69 engine driving a five-blade, single-rotation propeller and not having the folding wing arrangement.

It was to be followed by the proper naval variant, the F.32, which had 2,350 hp Griffon 89 with a six-blade, contra-rotating propeller. 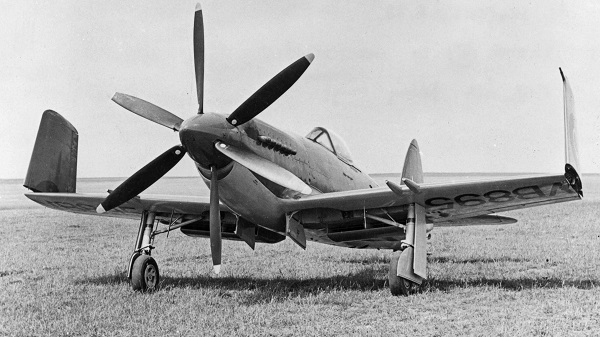 This would assist in landing and take-off stability in the aircraft by negating propellor torque.

The interest in the Seafang was that it had one serious advantage – or so it seemed – over the Spiteful. In 1945 it was uncertain whether jets would be capable of operation from the Royal Navy’s carriers, and so a high-performance piston aircraft seemed a good insurance policy. So, when the Spiteful’s orders were slashed in May 1945, they were essentially transferred to the Seafang F.31, with 150 being ordered.

But despite the perceived urgency, the Seafang essentially met the same fate as the Spiteful. The first F.31 flew in early 1946, with the first F.32 in June the same year. But with the war ended, the need for the F.31 was gone and only nine, plus the original prototype, were built before it was cancelled.

Effort continued with the F.32, which as a more fully converted carrier fighter had more perceived use. The production aircraft built were capable a top speed of 475mph and were demonstrated to the Dutch and French for possible sales. The Seafang was praised for its handling, though still had the nasty stall issue of the Spiteful, a product of their shared laminar wing. 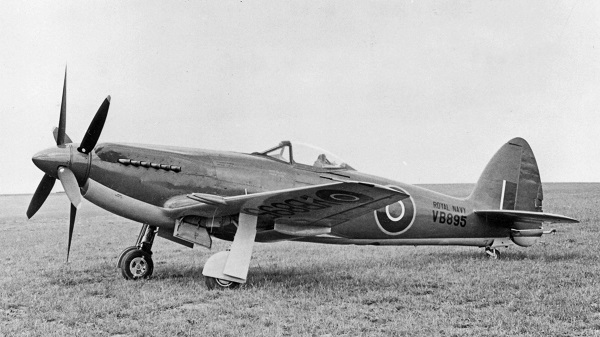 But ultimately, the Seafang was like its land-cousin – too late and simply not necessary. The Royal Navy didn’t think the Seafang offered anything worthwhile over the Seafire F.47 that was in service already, and the pilots generally preferred the new Sea Fury that was coming into service.

It was also becoming apparent that jets like the Vampire were going to be able to operate from carriers, marking the impeding end of the piston fighter at sea.

So, the eighteen Seafangs – ten F.31 and the eight F.32 – were, like the Spiteful’s, all scrapped after a couple of years of testing. And that was the end of the ultimate Spitfire development – though ironically their forebears would go on to serve for many years after their supposed successors were gone.

There is a final footnote.

The Spiteful’s laminar wing, the reason for its creation, was still thought to have promise. So it was used on a new jet aircraft that Supermarine was developing which initially was called the “Jet Spiteful”. This would ultimately be developed into the Supermarine Attacker, which saw service with both the Royal Navy and with the Pakistan air force.