The Dassault Mirage III is a legend. With its graceful lines, it is practically the epitome of the delta fighter design, widely regarded as one of the best Western fighters of the Cold War era. Capable of Mach 2 and of acting as both fighter, interceptor and attack aircraft, it was also a formidable multirole platform. 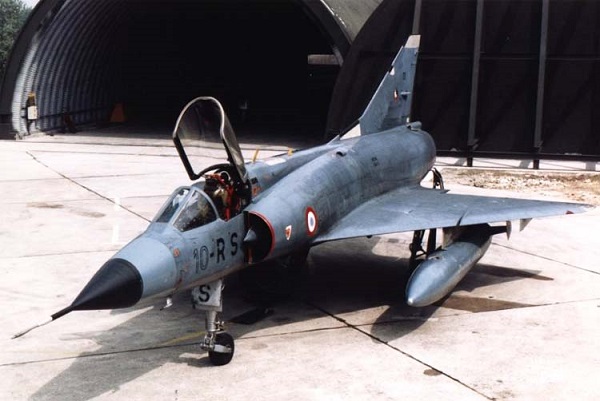 Because of this, the Mirage saw use across the globe with a multitude of users which also saw it acquire a solid combat reputation, especially in the hands of the Israeli Air Force.

Now, the Mirage is hardly a forgotten aircraft. Indeed, some are still flying in front line service today! Don’t get me wrong, I’ll cover it one day because it is just so awesome. But for now, let’s settle for one of the aircraft’s more unusual derivatives.

In the early 1960s the Swiss Air Force choose the Mirage IIIS to be their new fighter. They procured a licence to construct the aircraft and plans were made to build one hundred Mirages, which would become the primary fighter aircraft in their inventory. 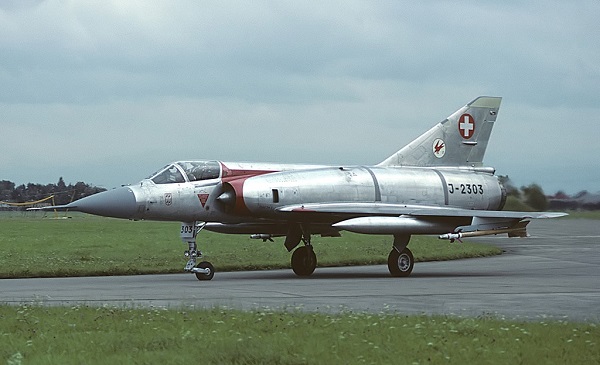 But the Swiss wanted some substantial changes made in the aircraft they were building. Principally this meant the fitting of an American radar and compatibility with missiles like the AIM-9 Sidewinder and the AIM-4 Falcon air-to-air missiles. They also needed the airframe beefed up to deal with rougher temporary airstrips that the Swiss expected to use in the event of actual conflict.

Unfortunately, all this caused issues. In fact, it caused an out and out scandal.

The changes made to the design and problems in getting the advanced aircraft into local production meant that the costs of the program practically doubled in the space of a single year. The Swiss found they couldn’t afford the full number wanted. As a result, they had to settle for an initial build of 57 Mirage III’s. And this meant they still were short on the numbers of first-rate aircraft they wanted.

In 1967 they approached Dassault with a request to develop a new version of the Mirage as an attack aircraft that would better fit their requirements. The Mirage III’s delta configuration meant that it had real failings in low-speed manoeuvring.

The Swiss needed an attack aircraft capable of increased agility at low level in valleys. They also wanted something with a lower landing speed for use on short, rough field sites.

So, Dassault had a think about it, and came up with: 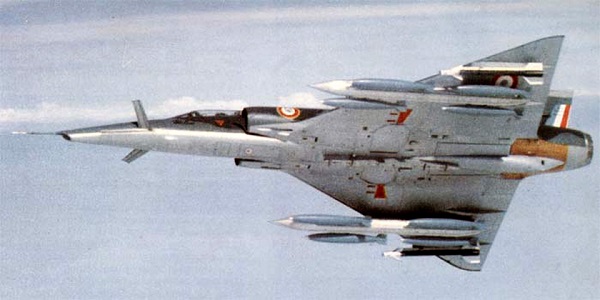 Together, Dassault and the Swiss Federal Aircraft Factory (the Fabrique Fédérale d’Avions – FFA) developed a modified nose design. This saw the addition of a pair of forward retracting fore planes – rapidly dubbed as “moustaches” – which would change the aerodynamics of the aircraft and allow for the improvements that the Swiss wanted. 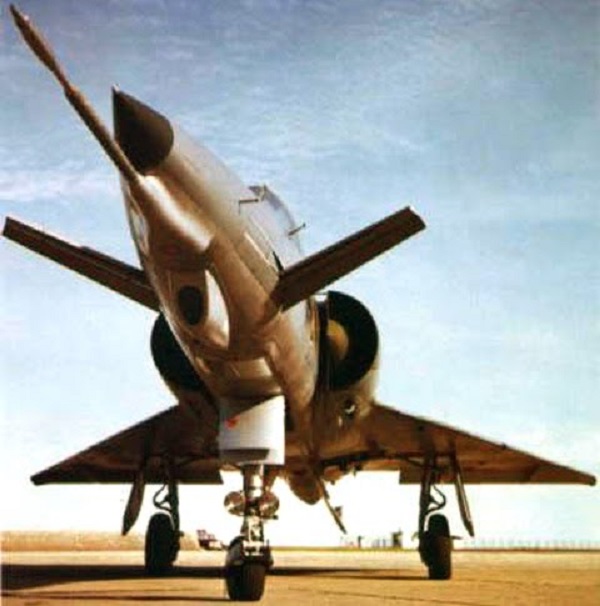 The fins measured a metre in length each and were fitted with fixed slats on their leading edges and slotted trailing edge flaps.

The first conversion was made to a Mirage 5J, one of the Israeli aircraft that had been impounded because of the 1967 Six-Day War. This aircraft, designated somewhat confusingly as Milan 02 but more popularly known as “Asterix” after a famous cartoon character, was used to test the concept in wind tunnel trials. 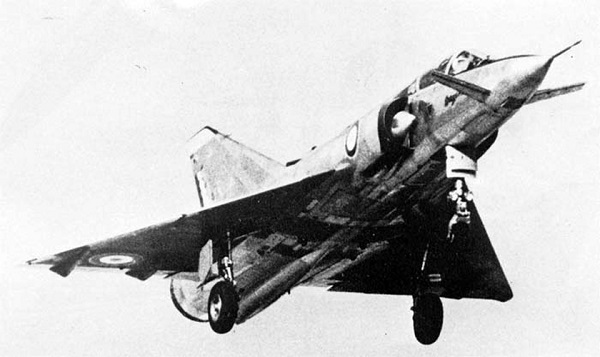 On Milan 02 the moustaches could only be adjusted on the ground and in ten-degree increments, but they did prove the basic concept. When the tunnel tests proved successful, the aircraft was cleared to begin test flights, which began in September 1968 and ran until March ’69.

Dassault then moved on to building a fully operational demonstrator of their moustache concept. This, the Milan 01, was built on a Mirage IIIR reconnaissance aircraft and tested the concept of the variable nose winglets in flight and was able to deploy and retract them fully. This was flown for the first time in May 1969.

The testing demonstrated that the Milan’s moustaches did indeed work effectively. Suitably encouraged Dassault and the Swiss moved ahead with building the final prototype which would essentially be the proposed service model for the Swiss Air Force.

This was another converted IIIR and fitted with an improved Atar 9K-50 engine. This provided more thrust and better fuel consumption than the Atar 09C used on the earlier Mirages, producing 15,900 lbs of force on afterburner verses the earlier engines 13,700.

This last model, designated as the Milan S for Suiss, also fitted an advanced navigation and attack system that was derived from that being developed for the SEPECAT Jaguar. First flight occurred on May 29th, 1970.

The Milan would prove a definite improvement over its predecessor. Take-off distance was reduced, and the potential payload increased. The moustaches also allowed for greater agility in low level flying and reduced the aircraft’s approach speed by between 15 and 20 knots.

According to Dassault, the Milan was capable of top speeds of Mach 2.2 at altitude and of Mach 1.14 at sea level.

Armament was composed of two 30mm DEFA cannon internally and a bombload of 4,000kgs (8,818 lbs) carried on seven hardpoints.

All in all, Dassault and their Swiss partners seem to have produced a very capable fighter bomber.

In May 1972 testing began by the Swiss to assess if the Milan would be suitable for their requirements. In competition was the American LTV A-7 Corsair. Both aircraft apparently performed extremely well, and the Swiss concluded that the competition was a draw. 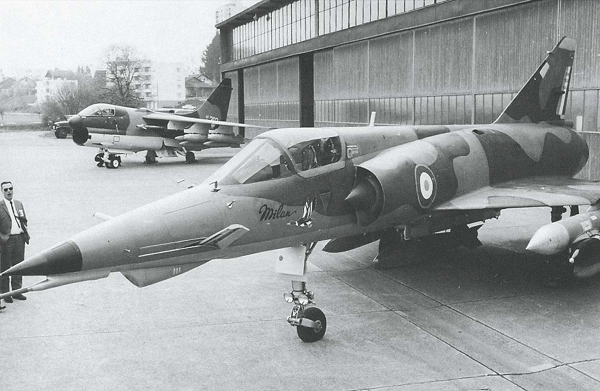 Unfortunately, they also concluded that they couldn’t afford either. Instead, they would upgrade their Hawker Hunters and maintain them in the attack role and in fact would ultimately order the Northrop F-5E Tiger to fulfil the role of fighter-bomber in 1975.

And that might seem like that for the Milan, but in fact no. The Milan S was used by Dassault as a testbed and ultimately converted into a new aircraft, the Mirage 50.

This would see new options in terms of modern radars and electronic equipment being fitted, generally specific to a customer’s desires, and was essentially the final model of the original Mirage III to see production, though in limited numbers.

But what it did do was provide several existing Mirage users the option of updating their aircraft with the improved engine and avionics that Dassault offered. This was all a direct development from the work that had been put into developing the Milan, and which is one of the reasons that Mirage’s are still flying with air forces to the current day.

So though the Milan might not have been successful, its legacy certainly was.