When it comes to helicopters, the world has seen just about every combination of rotor blades going. You’ve got your vanilla single, that uses a propulsion source on the tail to counteract the torque, generally another, smaller rotor. 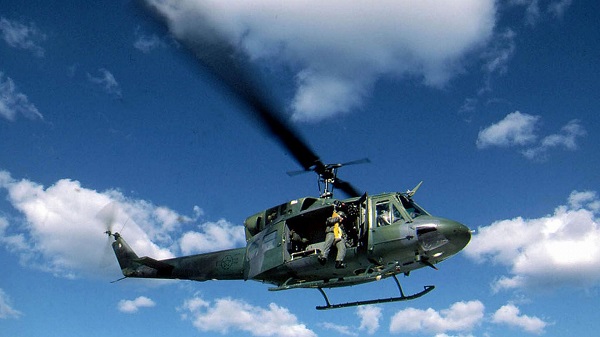 You have twin rotors, that allows greater lifting force to be applied and also counteracts the torque problem by having the rotors rotate in opposite directions. 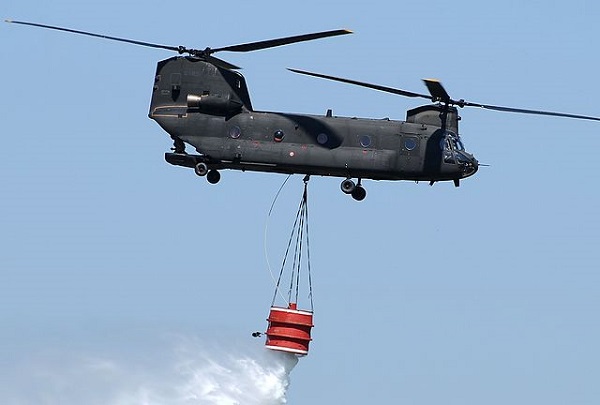 Similarly, you have coaxial rotors and, in an almost logical extension that is generally being applied to many lightweight UAVs, you have quad rotors. And, of course, you have the triple rotors. 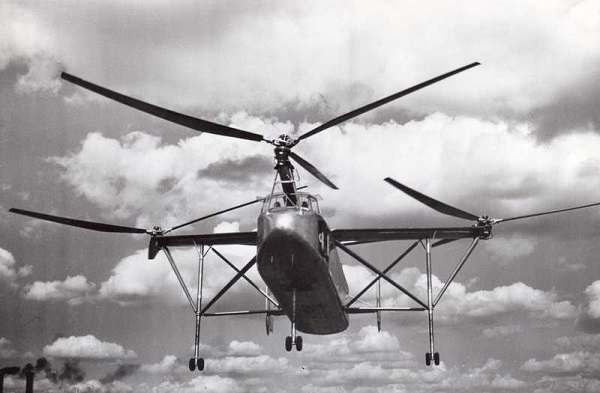 OK, not so popular nowadays, but for a brief period, the biggest helicopter in world used three rotors – the Cierva W.11 Air Horse. 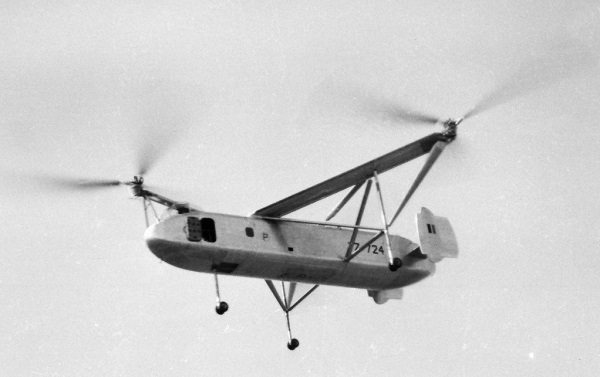 Cierva is little remembered now, but the company’s namesake, Juan de la Cierva invented the first autogyro. This type of aircraft uses an unpowered rotor with free autorotation to develop lift, while forward thrust is provided by an engine-driven propeller. The most famous example of an autogyro that most people would likely be familiar with is Little Nellie from the James Bond film You Only Live Twice.

De la Cierva was killed in a passenger plane crash in 1936 – somewhat ironic as he had been the test pilot of dozens of his experimental aircraft – and though the Cierva Autogiro Company had some successes making limited numbers of their various intriguing machines the Second World War saw the helicopter, in which the main rotor is driven, pointing the way forward in rotary aircraft.

So the Cierva company – which was funded by the G & J Weir Engineering group and so survived the demise of its namesake – set about creating designs that they hoped would give them a piece of what seemed to be an expanding pie. A range of experimental aircraft were built to test different ideas on the most efficient way to utilise rotors, and this culminated in the two-seat W.9. 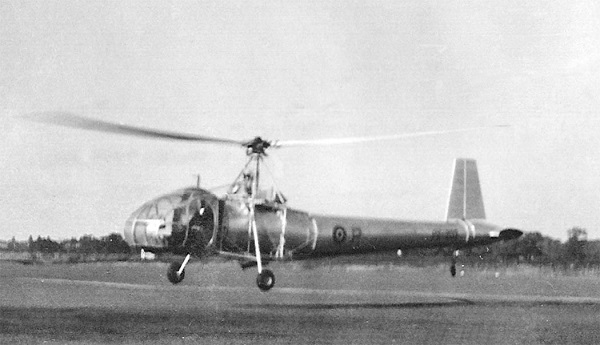 This rather innovative design used what we would now call a NOTAR system, in that to counter the torque from the main rotor, instead of using a tail rotor the W.9 vented hot air out the long tail boom as a controllable jet exhaust.

The W.9 was lost in an accident in 1946, but Cierva had already moved on and identified the future need for helicopters with a much larger cargo and carrying capacity than those being built. Hence development began of the Air Horse.

Recognising that the rotor blades at the time were not necessarily strong enough to support heavier loads and airframes they went with the logical solution of designing the aircraft to use more than a single rotor. The head designer on the project, Cyril Pullen, had already developed a design in 1938 that used two rotors side by side and mounted on outriggers, the W.5.

This had proven the idea to have good flying and control characteristics, although fore and aft stability had needed improvement and so Pullin opted to use that concept and add a third rotor to act almost like a tail on a conventional aircraft to the much larger W.11.

Three rotors reduced the load on the hubs considerably in comparison to other designs of the day, and wind tunnel testing undertaken in 1947 indicated that mounting the third rotor at the front of the aircraft provided the best option, with the rotors forming an equilateral triangle.

Initially the W.11 was envisaged to be an aerial crane, carrying large loads externally but with a minimal structure that just supported the cockpit, engine and rotor set. But it was then decided that the aircraft might as well be built with a stressed skin design that provided not just the chassis for the rotors but could also act as a fuselage for internal carriage of personnel or equipment.

Because British aeronautic development and procurement in the post-Second World War period is just plain odd in a lot of ways, it wasn’t the military that was interested in the idea of large troop/freight carrying helicopters; it was the Colonial Office, which thought the W.11 might make a splendid crop sprayer in Africa.

As Cierva didn’t have the experience to build such large aircraft, orders were placed with Cunliffe-Owen Aircraft for two prototypes. These were completed in 1948 and in December of that year the W.11 first flew.

The aircraft featured a two-man cockpit with two fold-down seats in addition should extra crew be required, with the engine compartment behind them and then the cargo area.

The engine was a Rolls Royce Merlin 24 that produced 1,620hp. This powered the three rotors, which were built of laminated wood and had a diameter of 47 feet (14.3 metres) each. These all rotated counter clockwise, which would normally cause torque issues, but this was resolved by slightly inclining each rotor axis to negate this issue in cruising flight, whilst the aircraft’s twin tail would allow the pilot to trim and counteract the force when in other flight modes. 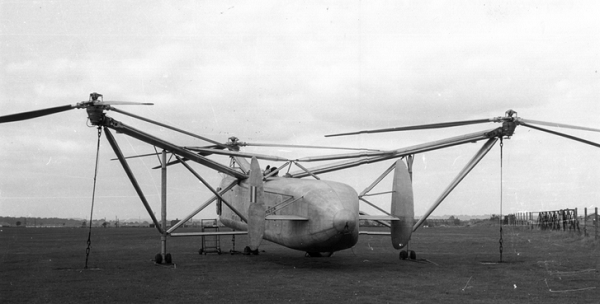 In testing the W.11 demonstrated a top speed of 125mph (200 kph) and seemed to be an extremely efficient flier, especially by the standards of the day. The second prototype was completed, and plans were laid to build more powerful versions of the then-world’s largest helicopter.

The first of these proposals would see the aircraft enlarged and be powered by two Merlin’s and was intended for the Colonial Office role as a crop sprayer. The second was to have used two of the new Rolls Royce Dart turboprops that was then entering service.

Either of these would have substantially improved the Air Horse’s power-to-weight ratio and made this helicopter even more capable, despite it’s odd looks, with potential payload being three tons.

But the fact that you’ve probably never heard of this aircraft gives away where this is all going. On 13 June 1950, the first prototype crashed, killing the two test pilots and the flight engineer. Cause of the crash was a fatigue failure that caused the front rotor to fail.

The two pilots, Henry Alan Marsh who was Cierva’s Chief Test Pilot and manager, and John Cable, from the Ministry of Supply, were two of most experienced rotary-aircraft pilots in the world at the time and their loss was keenly felt by the tight community involved in the industry.

This tragedy would have been bad enough, but hardly unusual in developmental aircraft. However, the W.11, despite its potential, was already on shaky ground from a production point of view. Cunliffe-Owen Aircraft was essentially moving out of aircraft already when they agreed to help build the W.11 prototypes, and the crash and loss of the first Air Horse was followed by Cierva’s main investor, G & J Weir, pulling out as well. This was shortly followed by the cancellation of the whole project by the British Government.

In 1951 Cierva was taken over by Saunders-Roe, becoming that company’s helicopter division and where, somewhat ironically, it would have some success with designs that were in development at the time of the company’s absorption.

The other W.11, which had only about twenty hours of flight time on the airframe was scrapped, and that was the end of the triple-rotor helicopter design; an idea that, had things worked out a little differently, may well have been a lot less odd-looking to modern eyes due to greater familiarity, had the W.11 becoe the standard for heavy helicopter design.