In my last video I talked about the Blackburn Firebrand; an aircraft that started off intended to be a high-performance interceptor and ended up being a torpedo attack aircraft. Naturally, such a change in roles meant that the process of getting there was…somewhat painful.

The primary attempt by Blackburn to make the Firebrand into a torpedo aircraft with a Centaurus engine, the Mk.III, was something of a disaster, and though the company would persevere and get some modicum of success with the follow-on Mark. IV, it was recognized that the original core design work on the Firebrand meant that it wasn’t exactly ideal for its new role.

This was all taking place in 1943, and while Blackburn were hard at work trying to iron out the issues with the Firebrand, it seemed sensible to come up with a fresh sheet proposal for the British authorities. And that was the B-48, unofficially named as the “Firecrest”. 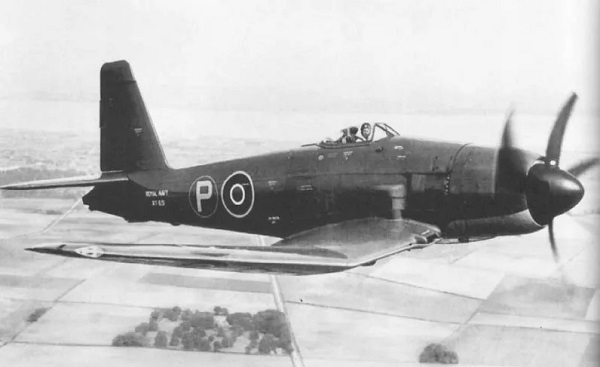 In October of that year Blackburn began work on the new aircraft that would aim to resolve the key issues that were essentially inherent in the Firebrand.

One of the biggest complaints about the Firebrand was the poor visibility for the pilot when coming into land on a carrier. The Firecrest sought to remedy this by moving the cockpit forward and raising it, allowing the pilot to see past the nose and wing leading edges. This entailed altering the fuel tank layout, which were moved from in front of the cockpit to behind it.

As in the later Firebrand’s dive brakes were added as were large Fowler flaps which would help with STOL characteristics in carrier landings.

But the biggest change was in the wing. This totally replaced the Firebrand’s design with a new one that was an inverted gull shape and that had a relatively thin laminar-flow design for improved air streaming.

The Firecrest also sought to improve on the wing folding mechanism of its forebear, and its wings had two joints for double folding, making for a more compact aircraft when stowed. 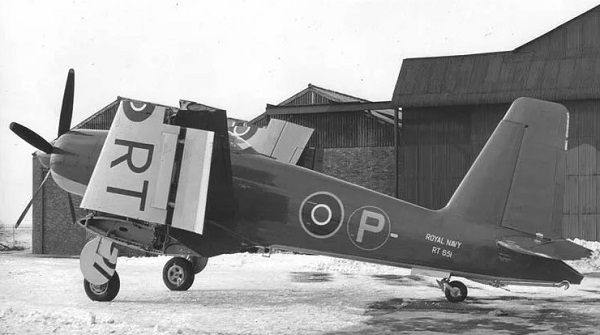 The new wing offered some weight saving over that on the Firebrand, and though the Firecrest retained the same structural build design as its forebear – with a tubular steel frame forward of the cockpit and a stressed skinned semi-monocoque behind – other measures were taken to both simplify and lighten the aircraft in comparison to the Firebrand.

This meant that even though it carried more fuel, the Firecrest still weighed more than 400kgs less than the Firebrand at gross weight without payload.

To counteract the torque that the Centaurus radial gave to the aircraft, a factor that led to considerable issues and redesigns in the Firebrand, it was hoped to fit the Firecrest with the Centaurus 77 that had counter-rotating propellers.

Interested in the possibility of a future replacement for the Firebrand the British Air Ministry issued a specification to Blackburn based on their proposal in early 1944, along with an order for two prototypes. This was followed by an order for a third aircraft in April 1945, but things were progressing slowly.

Blackburn had enough on getting the Firebrand working properly, which wouldn’t actually get into service until September 1945, literally just in time for the surrender of Japan. Obviously, the impetus for a new naval attack aircraft was essentially non-existent now, what with no more war and the Firebrand just now coming into service, and funding for development was slashed.

First thing to go was the Centaurus 77, and so the Firecrest had to be redesigned for the more conventional Centaurus 57 and then the 59, which produced 2,475hp. As this was not a counter-rotating design, the torque issue now had to addressed and the Firecrest needed to be fitted with a larger tail and stabilizer.

All this meant that it wouldn’t be until the 1st of April 1947 that the prototype made its first flight. Performance was notionally better than the Firebrand, with the aircraft demonstrating a top speed of 380mph (612km/h). But this was in an aircraft that didn’t carry any of the weapons or equipment that a service aircraft would, which would have impacted performance. 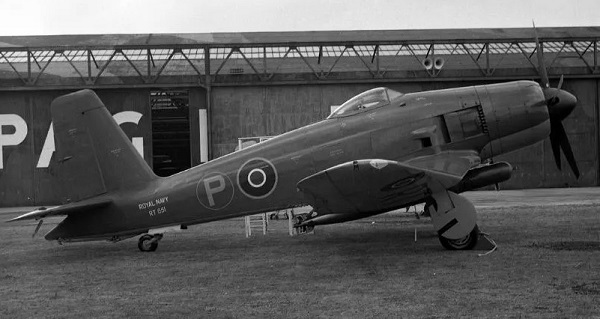 Indeed, though the Firecrest had shackles for carrying a torpedo, as well as mounting points on the wings for two 500-lb bombs or rockets, it didn’t carry the heavy cannon armament of its predecessor, instead being wired for-but-not-with attachment points for two .50-calibre machine guns that would have been carried externally on the wing.

And despite the improvements intended to remedy the faults of the Firebrand, unfortunately the Firecrest doesn’t seem to have been a very good aircraft to fly. Famed test pilot Eric Brown, who as said in my previous video was famously critical of the Firebrand, wrote that the Firecrest actually handled worse than its predecessor.

Even worse, strength testing conducted by the Ministry of Supply indicated that they did not think the aircraft strong enough for carrier service.

On top of all this the Firecrest, with its radial engine, was now looking rather old hat. Three-and-a-half months before the Firecrest prototype flew, Westland flew their proposed replacement for the Firebrand in the torpedo and attack carrier aircraft role – the Wyvern. 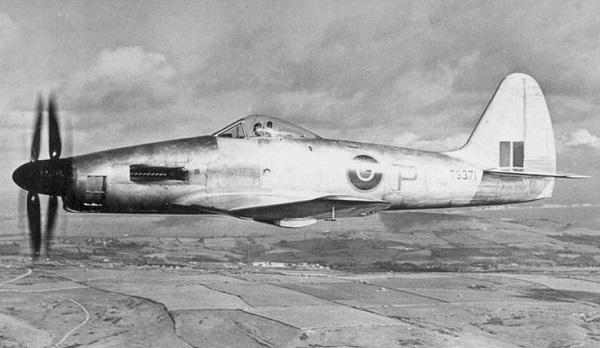 This seemed a more promising prospect with its more powerful Eagle engine and ultimately would go on to replace the Firebrand, though it also had its share of development problems.

In fact, a mere two-and-a-half months after the Firecrest flew the prototype of the navalised version of the Supermarine Attacker took to the sky for the first time. Though this was intended to be a fighter originally, it showed very much the direction that the Fleet Air Arm was going. 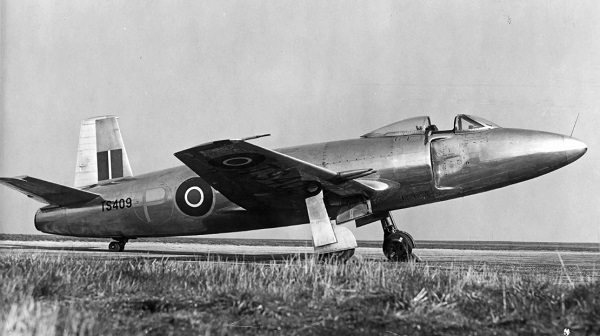 In contrast the Firecrest didn’t really offer anything on what was already in inventory, indeed seems to have actually been worse, and very much looked to be a dinosaur in technological terms. All this effectively killed the Firecrest. In March 1949 it was decided that there was no point continuing on with the aircraft’s testing and development. Blackburn repurchased the aircraft from the British government for conducting their own work, but ultimately the three examples built were scrapped a few years later.

It is tempting to draw parallels with the Firecrest and another naval torpedo and attack aircraft that was developed in the same period – the Douglas Skyraider. On paper, the two had very much the same role and design parameters. But it seems unlikely that the Firecrest would have matched up to the record of its legendary American cousin.

For starters, the Royal Navy’s interest in advanced technology was a recognition that they had a much smaller capability and needed to compensate for that factor by ideally fielding better quality aircraft (please note, I am not saying they succeeded, I’m saying that’s what they hoped for).

The US Navy in contrast had such a huge overmatch that they could afford to field both the most advanced jets that could be designed for them and retain the Skyraider for its valued abilities to just plod around and smash stuff.

Plus, the Firecrest was, as said, not very good by the sounds of it. Had the proper development potential, especially of the engine, been fulfilled then maybe it could have been a useful aircraft. But that is far from guaranteed, and with the Wyvern in the wings and seeming to be the preferred option, the Firecrest probably never had a chance.

In fact, it would probably be better to compare it to one of the other great “what-ifs”, the Martin Mauler – another aircraft that ticked a lot of boxes at the time of its proposal, but which didn’t really deliver.

And that, I suspect, would have been the Firecrest, had it got into service. An aircraft that at best offered increments when the rest of the world was leaping forward.