In 1936, with the clouds of war beginning to loom ominously on the horizon, many European countries began to look seriously at the state of their air forces. One of these was Belgium.

At the time, the mainstay of the Belgian Air Force’s fighter component was the Fairey Firefly II. Eighty-two of these aircraft had been purchased from the UK or built under licence in Belgium, entering service in 1931. A competent enough aircraft in the early 1930s, the march of progress meant that five years later they were out of date and needed to be replaced.

One Belgian designer, Alfred Renard, came up with an interesting series of aircraft for the job that looked like they had a great amount of potential. He also envisaged some very advanced ideas that would be used on later aircraft.

The Renard R-series of fighter prototypes and concepts.

I shall run through them in order, starting with the first of the series. 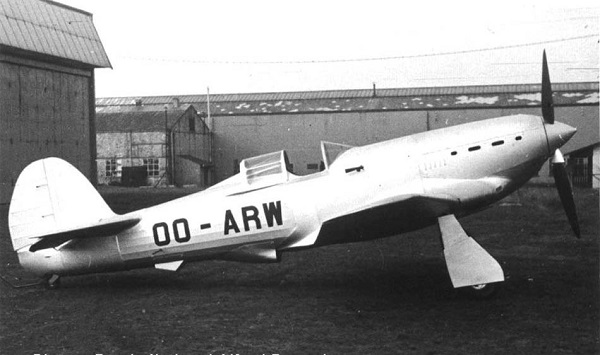 This low wing monoplane was, by the standards of the day, thoroughly modern. The R.36 was metal-skinned except for the rear fuselage which had a fabric covering. Armament followed the French style, with a 20mm motor cannon firing through the propellor hub and four .303 FN-Browning machine guns mounted in the wings. Powered by a French Hispano-Suiza 12Y liquid-cooled engine that developed 910hp, the R.36 first flew on November 4, 1937.

Progressive improvement and tweaks were made during the testing and the aircraft in its final form seemed to be a perfectly competent fighter, certainly comparable to the best foreign designs and better than many. Performance was reported to be extremely good, with the aircraft having a top speed of 314mph and demonstrating a climb rate better than the contemporary Hawker Hurricane of the RAF. Indeed, a French aviation magazine reported in late 1937 that the R.36 was better than the Morane Saulier MS.406 that the French Air Force was just about to bring into service.

With its simple construction method, wide track landing gear, solid firepower and good performance, the aircraft certainly seemed to be a good option for prospective buyers. The R.36 performed several demonstration flights for potential military customers, including representatives from France and the Republic of China. 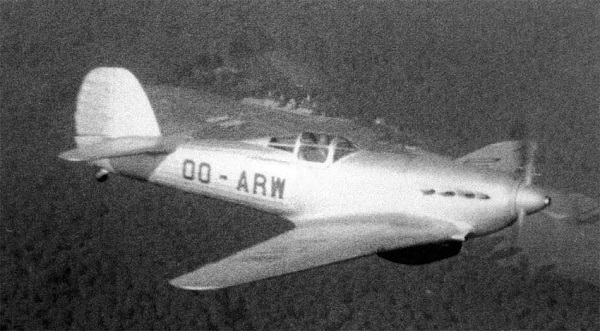 The Belgian Air Force decided that the Renard would be a good replacement for their Firefly’s and in late 1938 ordered forty. But then, as is typical in these aircraft that never made it, disaster struck.

On January 17, 1939, the prototype crashed, killing the pilot. The cause was never determined, but two options were favoured. First, the pilot had blacked out while performing manoeuvres, the second that part of the radio had come lose and jammed one of the control surfaces, leading to a loss of control.

The destruction of the prototype and the death of the pilot were bad enough, but it followed other issues both with the R.36 and with Renard’s designs generally. In April 1938, the prototype Renard R.35, a pressurized airliner design, had also crashed, killing famous test pilot Georges Van Damme.

The two losses, less than a year apart, caused alarm. Was Renard a reliable designer on these cutting-edge aircraft?

Additionally, the French had turned down the R.36, stating it was not able to handle the standard level of manoeuvring stresses that was required of French fighters.

It must be stated that the French were also keen to sell the MS.406 to the Belgians, so they may have had ulterior motives, but the combination of concerns led to the Belgians cancelling their order for the R.36. Instead, now somewhat desperate to get a modern fighter, they bought a license to build the Hawker Hurricane.

This decision was not met particularly well in Belgium, where newspapers lambasted the Minister of Defence, asking why an inferior foreign aircraft had been chosen over a native design. Despite the row, the loss of the prototype spelt the end of the R.36. Because Renard had already moved on to more impressive designs.

The second of the series was the R.37.

This took the fuselage of the R.36 and reengined it with the Gnome-Rhone 14N radial engine that produced 1040hp. Because of the change of engine, the motor cannon had to be dropped from the design, so armament was four .303 machine guns in the wings. The new engine was expected to provide better performance, with the projection being that the aircraft would make 327mph at 16,000 feet.

The R.37 was first displayed at the Brussels air show in July 1939 but time was very much against the aircraft. 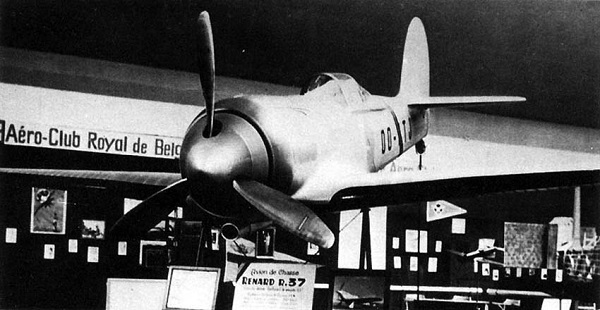 When the Germans invaded Belgium in May 1940, they found the prototype sitting in a hanger. As was standard with captured designs, a pilot then flew it back to Germany for evaluation. 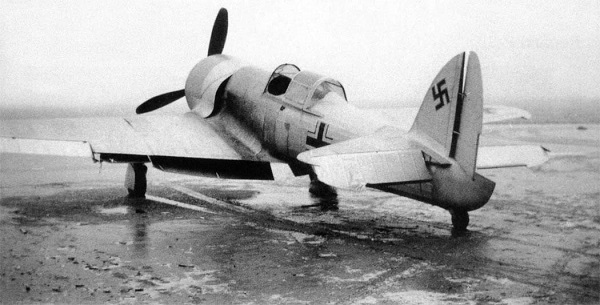 He may have been a little alarmed if he had known that that was literally the first time the aircraft had actually been in the air!

Unfortunately, no record exists that I am aware of any German evaluation of the R.37. The R.37 essentially vanished into history at that point.

The reason for the R.37 not getting into a full test program is largely because attention was going into another Renard design, the R.38.

This reengined the basic R.36 with the Rolls Royce Merlin, which produced 1020hp. This design was recognized as having a lot of potential and as such did get into the air for testing, first flying on August 4, 1939.

The R.38 showed itself to be a great performer, clocking a reported top speed of 338 mph at 20,000 feet. It also apparently climbed to 16,500 ft in a few seconds over five minutes. That is impressive, as it was two minutes faster than the contemporary Spitfire – which used the same engine – and the German BF-109E.

Like the R.37, armament had to reduced to four wing-mounted guns, but there were also plans to change these out for two FN-Browning 13.2mm machine guns.

Again though, timing was not on the R.38’s side and though it did get into the air, the fall of Belgium meant it would never see service. The prototype was evacuated to France, and then planned to be moved further on to Morocco, but the collapse of French resistance prevented that and the aircraft fell into German hands. Again, no further details of what happened to the aircraft exist, one assumes it was scrapped by the Germans after they had looked it over.

That represents the sum total of Renard’s flying aircraft, intriguing what-if’s that certainly had the potential to be excellent aircraft, though that would rather depend on whether the concerns on the safety of the design were genuine or not.

But Renard also had a couple of other interesting ideas that are worth mentioning, even if they never proceeded far.

The R.40 was a version of the R.38 fitted with a pressurized cockpit. No picture of this exists, apparently the first was in the process of development when the Germans came knocking, and it was reportedly destroyed in an air raid.

The second was a paper design that Renard was developing, where he hoped to address how to give a fighter better range and firepower but retain performance. His solution was to marry two R.38 fuselages onto one wing – the R.42. 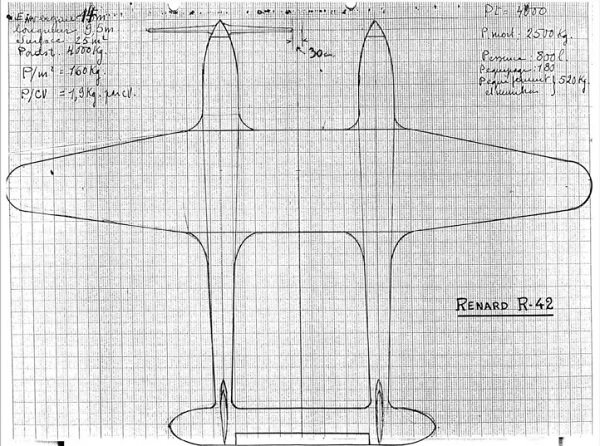 Powered by two Merlin engines, the R.42 was expected to have a range of 750 miles, a top speed of 420 mph and carry an armament of four 13.2mm Brownings or possibly four 20mm cannon. Now of course, all Renard had was a paper idea, so ultimately the aircraft remains speculation.

But what is interesting is that he appears to have been several years in advance of other designers in this idea, with both the Germans and, most notably the Americans fielding aircraft in this configuration.

However, the R.42 will always remain, along with the rest of Renard’s R-series monoplanes, “what-if” aircraft.