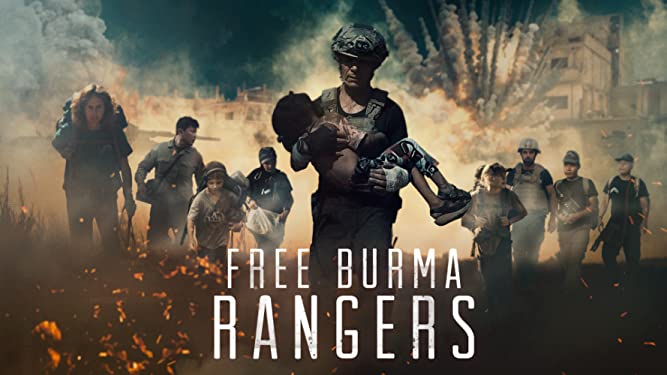 Before I give my opinion of “Free Burma Rangers” I have to issue a couple of warnings.

Firstly, not only do I know Dave Eubank, who is the main subject for this film, I consider him a friend. I also know all of the other people spoken to in the film – again, considering them friends –  and have volunteered multiple times with the Free Burma Rangers (FBR).

So feel free to write off my review as overly biased because of that, but I think it’s important that you are aware of that factor.

Second this film is a documentary that talks about the wars in Burma and Iraq. Both these conflicts revolve around two incredibly brutal organisations – the Burma army, also known as the Tatmadaw, and ISIS. As a result this film features disturbing footage and doesn’t pull its punches.

With that said let’s talk about the film.

As mentioned this is a documentary about the work of FBR and its founder, Dave Eubank. FBR is a front line organisation that provides relief in areas too dangerous for other charities to operate in. They provide medical support to those needing it right at the sharp end of war. FBR teams also have embedded camera teams and reporters who document the situation in the operational area, particularly war crimes.

The composition of the film is of interviews with various people, principally Dave but also his family and senior ethnic members of the organisation. This is complemented with footage – generally shot by FBR – of the war zones they work in.

The film goes through Dave’s upbringing as a missionary kid in Thailand, his time in the US Special Forces and then how in 1996 he went into the mountains of Burma – also known as Myanmar –  to try and help the Karen people who were being attacked in a genocidal campaign. It then talks about the founding of FBR and traces the development of the organisation, the work it does and it’s gradual move into other countries, principally Iraq.

Along with this is a description of the Eubank’s unconventional family life. Dave and his wife Karen managed to raise three kids in the jungle, and they have become as much members of the field teams as their parents. The film also talks about Dave’s personal philosophy and his Christian faith.

The documentary really highlights the work that FBR has done bringing the world’s attention to some viciously brutal wars which remain largely unknown in the outside world. It builds to the event that firmly bought the organisation to the world’s attention; the Battle of Mosul in 2016/17.

Here Dave and the team showed great courage running out into ISIS fire to save a little girl, footage that was shown around the world. But there were many more incidents that didn’t get into the spotlight and this film gives the viewer the opportunity to see some incredible stuff.

I said at the beginning about how I’m friends with the people in this documentary and that could colour my view of the film. And it did. I honestly thought that I would find this film embarrassing and “cheesy”.

I’ve heard the war stories off all of them, I’ve seen the pictures. So, I’ll admit, I’ve avoided watching it for quite a while.

I thought, in all honesty, that I wouldn’t like it. But I did. I found it inspiring and uplifting.

Yes, it is horribly grim. But that’s why Dave and  FBR goes where they go and does what they do.

In summary – I can’t recommend this film enough.

Free Burma Rangers is available on Amazon and Vimeo.