If ever you are in Charleston, you have to visit the Patriots Point museum and, more particularly, the USS Yorktown. Now moored in Charleston harbour, she is the centre piece of the museum and is a Mecca for military enthusiasts and historians.

The Yorktown is one of the famed Essex-class aircraft carriers. The ship commissioned in 1943 and would go on to serve until 1970, seeing action in the Second World War and Vietnam. During that time the vessel earned seventeen battle stars and a Presidential Unit Citation.

Visitors are able to explore large sections of the ship, including the bridge, engine rooms and CIC so as to get an idea of what life aboard the vessel was like. There are also multiple displays explaining the ship’s history, as well as that of the Essex-class and their origins in the Second World War.

Additionally, there are multiple aircraft aboard to see that served in the US Naval squadrons, including an F-9 Cougar jet fighter that you can sit in. The hanger deck holds mainly propeller aircraft from the first years of the carrier’s service. Visitors can examine such legendary aircraft as the F4 Wildcat and F6 Hellcat up close. 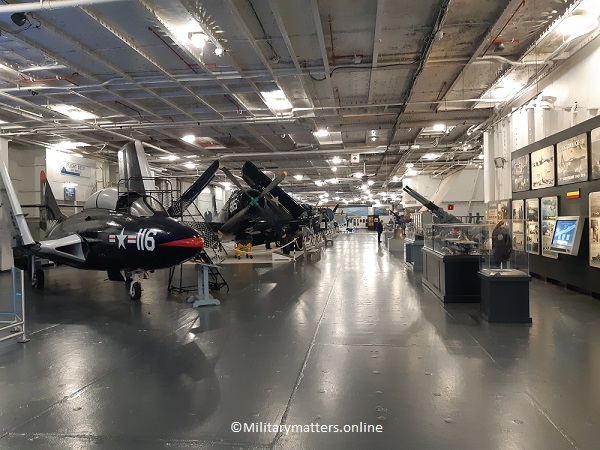 The hanger also holds a B25 Mitchell bomber, which will centrepiece a display on the Doolittle Raid once restored, as well as interactive flight simulators for fighter aircraft and an Apollo capsule. The Yorktown recovered the Apollo 8 command module after it was the first crewed craft to reach the moon, orbit it and return in 1968. The simulator gives visitors a taste of the moon mission, complete with a good shaking on take-off and touch down. 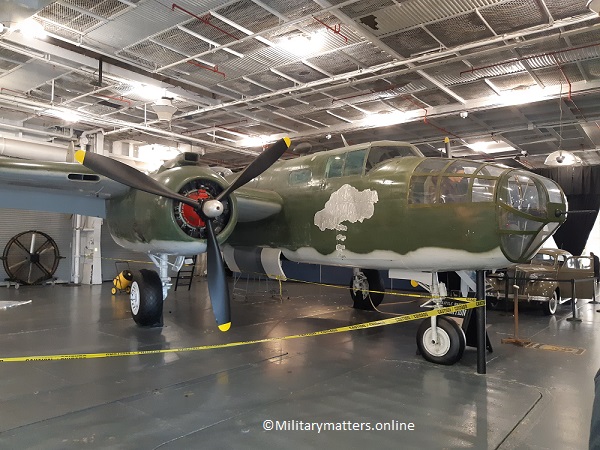 The B25 Mitchell gives an idea of how cramped the Doolittle mission would have been, especially considering that the Yorktown was a later and bigger ship than the aircraft carriers that actually performed the mission. 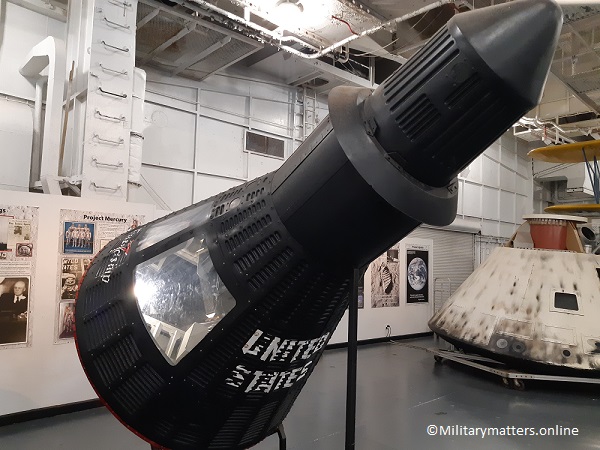 Replicas of the Gemini space craft and Apollo 8 command module.

But the flight deck is the real treat. Here you get to see a range of larger, more modern aircraft that any aviation museum would sell their mothers for. Visitors have the ability to get right up the planes and look them over thoroughly. 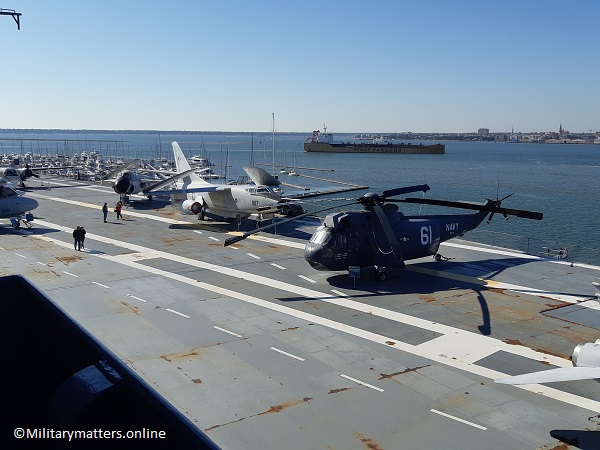 View from the bridge of the flight deck. 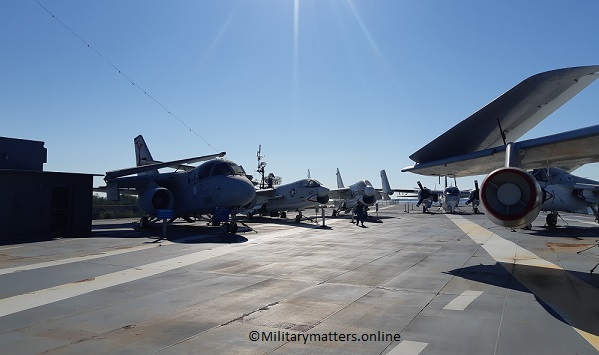 A veritable bonanza for any military/aviation nerds. 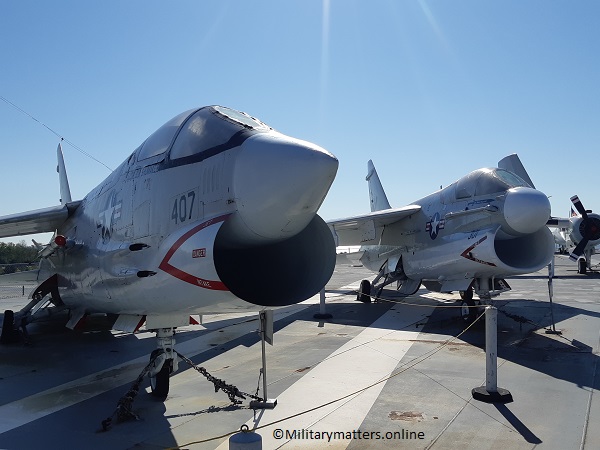 Kissing cousins – the A-7 Corsair and F-8 Crusader. 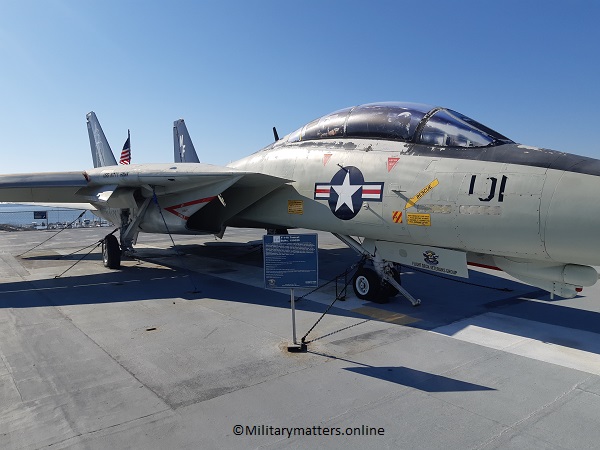 Though it never operated them, the Yorktown also has aircraft like the F-14 Tomcat (as seen here), F-18 Hornet, F-4 Phantom and even an S-3 Viking.

The Yorktown is just one element of the museum. Your admission fee also gives you access to two other ex-Navy vessels moored at Patriots Point as well as a Vietnam War exhibit. 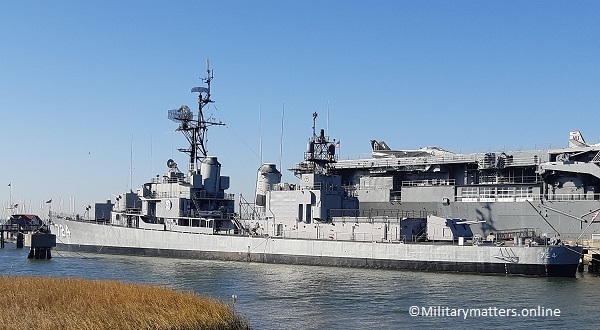 The USS Laffey (DD-724) – famous as “the ship that would not die” and soon to be subject of its own film – survived multiple hits from kamikazes and would go on to serve until 1975.

USS Clamagore is the last surviving GUPPY submarine in the United States.

Unfortunately, this reviewer did not have time to explore all of the exhibits. So I will have to return. And such is the excellence of this museum, that I fully intend to do!

When the Second World War started in 1939 the RAF’s Bomber Command was equipped with three main types that were, technically speaking, their “heavy bombers”; the Handley Page Hampden, the Armstrong Whitworth Whitley and the Vickers Wellington. Of these aircraft, the...

What Was America’s First Fighter Aircraft?

The United States currently, and for the foreseeable future, leads the world in military aviation. And nothing represents this better than this, the F-22.   This aircraft is the perfect demonstration of what has been a cornerstone of American military policy...

B-21 Stealth Bomber to be Unveiled in December

Northrop Grumman have announced that their latest aircraft, the B-21 Raider, is to be unveiled for the first time in December, which should give the world its first official look at this mysterious aircraft. And I don’t know about you but I am pretty excited to see...

In 1935 the US Navy had a bit of a crisis. They were just about to bring into service their newest carrier fighter, the Grumman F2F and were already flying the prototype of the next one, the F3F, which would remedy issues with the -2F and offer improved performance....

In my last video I talked about the Blackburn Firebrand; an aircraft that started off intended to be a high-performance interceptor and ended up being a torpedo attack aircraft. Naturally, such a change in roles meant that the process of getting there was…somewhat...