US Navy Make Huge Arms Seizure in North Arabian Sea, plus other Shenanigans in the Gulf

On May 7 the USS Monterey (CG 61) seized a huge illicit shipment of weapons from what is described as “a stateless dhow” in international waters in the North Arabian Sea. The action, part of an ongoing effort to interdict such shipments, has netted a quite impressive haul. 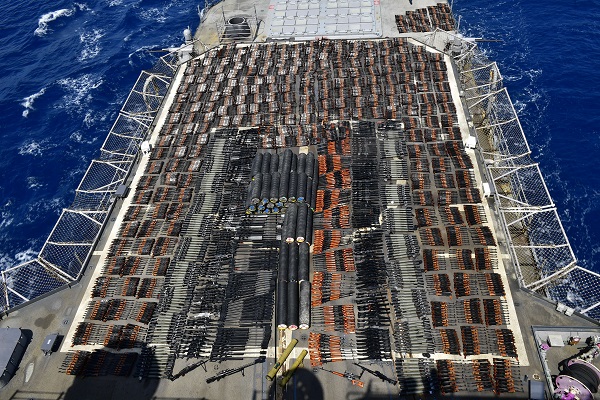 I’ve only given the photo of the seized material a cursory look, but by my rough count there are:

Over 2,500 AK pattern assault rifles, which the US Navy says are Chinese Type 56s.

What are described as “advanced Russian made anti-tank missiles” and advanced optical sights.

The US Navy has specifically said they are investigating the source and manufacture of the weapons, but it seems obvious who the source and destination are. It is almost certain that all of the small arms seized are made in Iran.

The AKs are almost certainly Iranian KLF rifles. Technically I believe these are a copy of the Russian AKMS, but they have an enclosed front sight which is a distinctive feature of the Chinese-made Type 56 – which is probably why the Navy has called them that.

However, I’ll admit that without having one in my hands, that’s not proof of Iranian manufacture.

What is, is this:

That is the distinctive pistol grip of an Iranian AM-50 Sayyad .50 cal heavy sniper rifle. Modelled on the Austrian Steyr HS.50 rifle, the curved pistol grip is the primary visual difference in the Iranian made weapon.

Iran also makes copies of the PKM and RPG, as well as the ammunition for all of the small arms seized.

So where was this bonanza going? To our old friends the Houthi’s in Yemen, of course!

Engaged in a brutal war of attrition against the Saudi-led Arab coalition in the country, the Houthi’s are Iran’s proxy in the Arabian Peninsula. As a result, they have received huge quantities of weapons from Iran over the years, including anti-ship and even ballistic missiles.

In fact, a war is being waged on the seas in the Gulf as both sides seek to dominate the waterways, constrained only by the participants wish to not lose control of the situation. On Monday May 4, the US Coast Guard fired two sets of warning shots at Iranian small attack boats that came within 150 yards of an American task force that was transiting the Strait of Hormuz.

This is the third such confrontation in the last few weeks, and there are probably multiple reasons for this escalation. The increase in the buzzing seems to have followed an attack on an Iranian ship last month that has long been stationed in the waters of the Arabian sea.

The Saviz suffered an explosion from what is thought to be a limpet mine on April 6. The Iranians claim the vessel, which has been operating and moored up in the seas around the Arabian Peninsula for years, is a base ship for their anti-pirate operations. Pretty much everyone else says it is used to support the Houthi’s in Yemen with intelligence and act as part of their logistics pipeline.

Iran swiftly blamed Israel for the attack, which the Israelis certainly didn’t deny and may have confirmed in a roundabout way through the American press. And Israel’s intervention is entirely possible, as Israeli ships have been subject to attack in the Gulf and have certainly blamed it on the Iranians.

So perhaps the removal of the Saviz from the high stakes game being played in the Arabian sea has left the arms smugglers more exposed to interception? Perhaps, this is the reason for the increased activity from the Iranians buzzing the ships of the United States?

Mind you, there is likely also another reason for the Iranians targeting the task force on May 4.

It was escorting the USS Georgia. 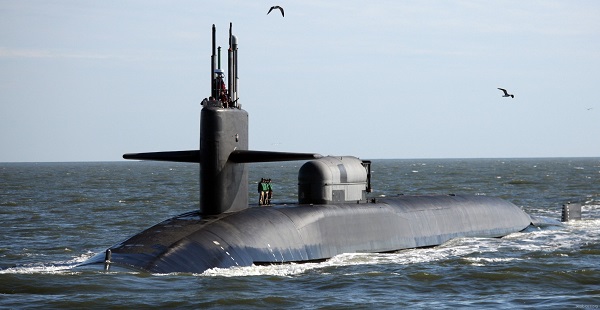 This huge missile submarine, which can carry 154 Tomahawk cruise missiles, was very publicly sailed into the Gulf in December, where she has been conducting visits and patrols since. The Georgia’s purpose in the region is, shall we say, somewhat unsubtle.

As a cruise missile boat, she has the sort of firepower that could inflict huge damage to key Iranian military infrastructure should the US decide that is required. So perhaps the Iranians wishing to give her a send-off isn’t entirely unexpected.