The Buff Is Going to Live Forever! The B-52J/K update

A couple of days ago the United States Air Force unveiled their newest bomber to much fanfare – the Northrop Grumman B-21 Raider. This has justifiably created a great deal of excitement, including I must admit in myself, as this is stated to be the first sixth generation aircraft to enter service.

In the blurb released by Northrop Grumman about the new aircraft’s capabilities the company states that the Raider will provide the “…backbone of the future for U.S. air power.”

Perhaps one day, but not in the immediate future. Because that job is going to continue to be done by an aircraft that has long been predicted to head for the scrapyard, but which continues to prove invaluable for the USAF. 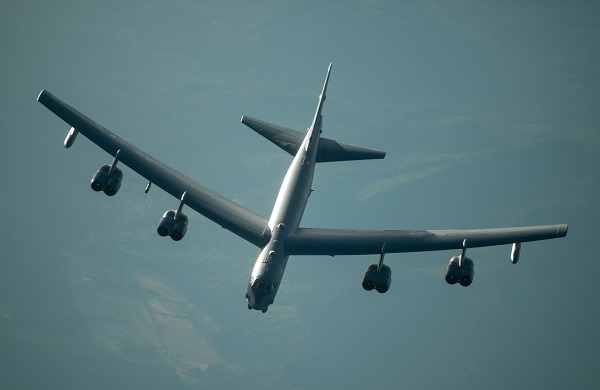 And the BUFF, as it is affectionately known, is undergoing a major upgrade program that is so comprehensive that it will probably justify an entirely new model designation (possibly two!) and potentially see the aircraft serve into the 2050s! Considering that the B-52 first entered service in 1955 and the last production aircraft left the factory in 1962, that’s quite a claim.

The BUFF has served in practically every conflict that the United States has fought in since it entered service, from the bruising bombing campaigns over Vietnam right up until the war in Afghanistan and the interventions in Syria. Seriously, there is at least one family on record where three-generations have flown the B-52 during their service careers!

And though the B-52 may be positively ancient, its sheer capability in terms of payload and range – a result of its design being focused on carrying heavy and bulky nuclear bombloads deep into the Soviet Union in the early days of the Cold War – means that as a bomb truck that can loiter over a target at altitude for hours, there are still few aircraft that can match it.

Naturally the B-52 has undergone numerous improvements over such a long career, with the final version, the B-52H, still providing the primary long range bomber force for the USAF, despite more modern aircraft such as B-1B Lancer and B-2 Spirit coming into service, both notionally with the idea that they would replace the old war horse. But despite the B-52s age, it now looks like the type may possibly see out the two-later generations of aircraft that were intended to replace it.

The USAF and Boeing are conducting a program that will see not just the lifespan of the venerable BUFF extended yet again, but will likely justify the aircraft being updated to be redesignated as either the B-52 J-and/or-K. In fact, according to Col. Louis Ruscetta, the senior materiel leader for the program, the update will be the most comprehensive that the aircraft has ever had.

All told it is anticipated that 76 B-52H’s will be updated to the new standard and though details are somewhat sparse, here is what is known.

The primary change is to reengine the old aircraft with the B-52H’s ancient TF33’s are being replaced with Rolls Royce F130s. These will produce the same 17,000lbf as the older engine but will by vastly more fuel efficient, have digital control systems and require less maintenance than the much older engines.

Though the stated requirement for the engine replacement was purely to replace the TF33, which after all hasn’t been built since 1985, and there was no official need to improve the B-52s performance, the new engines will increase the old bombers already very respectable mission range and make them cheaper to operate.

The second element of the upgrade program is in altering the sensor and electronic fit of the old B-52s. Artwork of the “new” aircraft released by Boeing indicate that the aircraft’s nose is to be redesigned, returning it to a sleeker profile closer to that of the original models of the aircraft when it first took to the skies.

The B-52H has taken on a somewhat “warty” appearance, with its nose hosting several protuberances that house passive night vision systems for the crew to conduct low-level night intruder missions which became the B-52s primary intended role in the 1970 and 80s. Instead, the new nose will house an AN/APG-79 active-scanned array radar which is the same as that used on the US Navy’s F-18E Hornet.

The change is also indicative of the mission profile that the B-52 will be expected to undertake, and indeed have actually been conducting for the majority of their careers – high altitude, long-range weapon carrier. The new radar will give the new B-52s better situational awareness and improved long-range targeting and will allow the nose to be more streamlined.

The new B-52 will also see its cockpit altered, being thoroughly modernised and digitalised, a sharp contrast to the existing B-52H which still has a lot of dial gauges for the crew to read. This update to digital systems will in turn allow for the removal of one of the crew.

Other changes to the electronics systems are the addition of two humps added to the aircraft’s back, and though their exact purpose hasn’t been stated it seems likely to be an enhanced satellite communication system.

And recently the USAF gave an indication of what the B-52s new role will be. At the beginning of December, they confirmed that they had taken the first steps to validating the loading procedures on the existing B-52 fleet with the new Air-launched Rapid Response Weapon (ARRW), the United States first hypersonic weapon. This is scheduled to enter service late in 2023 and is likely to provide the United States with one of its most formidable weapons in the inventory.

Details are again extremely nebulous, with speed projections of the weapon being everything from Mach five to Mach twenty. The B-52 has already proven the test bed of choice for the development program on this new munition, and it does seem that the BUFF will prove one of the primary carriers of the weapon. Indeed, the life span of the updated B-52s may now prove to be linked to that of the effective service life of the ARRW.

And so, this leads on to the question of just what the updated aircraft will be designated? In fact, the talk of their possibly being two new designation shows how fast things are actually moving.

At the moment, the airframe and electronic improvements are comparatively easy to accomplish, and it seems that these are proceeding. So, it seems possible that aircraft with the new nose and weapon capability, but retaining the old TF33 engines, may become the B-52J.

Although the reengining is a priority the integration and testing of the new powerplants requires a greater timespan and so it seems that once this is completed the rest of the old -H models will be converted to B-52Ks, with the earlier -Js following suit as they too are reengined.

Naturally, military procurement is always subject to change, and there are some that have questioned the logic of investing money into airframes who’s roots date to just after the Second World War. But regardless of such opinions, the B-52 is going to likely see its fourth – and possibly fifth – generation of crew flying the old bird.

First of the V’s – The Vickers Valiant