Drones and unmanned vehicles (UAVs) are becoming an increasingly important part of modern war fighting. From precision strikes on targets in other continents to providing airborne reconnaissance for an individual fire team, drones are providing major force multiplication for comparatively minimal costs.

But it is not just Western militaries that are recognising the new capabilities that UAVs bring. They’re cheapness and utility has also been appreciated by various non-state actors, a graphic example being the use of drones by ISIS which were provided with the ability to drop ordnance on unsuspecting targets.

With UAVs offering an inexpensive, “off-the-shelf” precision strike capability, asymmetric warfare looks to become even more expensive to any force that has to deal with it. As a result multiple companies are investigating ways to neutralise the threat such vehicles present.

The Israelis, with a long history of dealing with unconventional threats to their security, have just demonstrated a new weapon that offers a counter.

The Drone Dome system, developed by Rafael Advanced Defense Systems, is a Counter Unmanned Aircraft System (C-UAS) that is designed to address threats posed by hostile drones to both military and civilian sites. 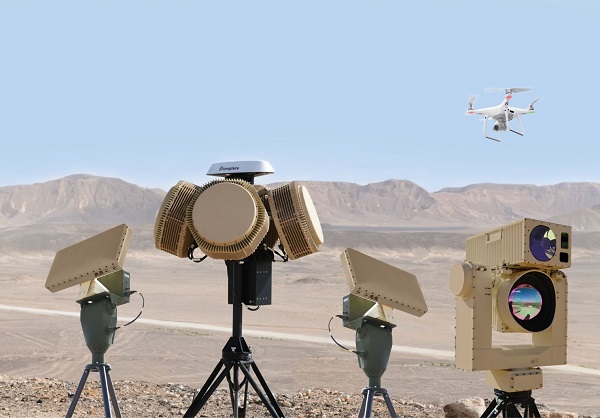 Capable of being fitted with either directional jammers or a laser system capable of making “hard” kills of a target, on 12 February Drone Dome demonstrated the ability to shoot down multiple UAV targets in a test designed to simulate a swarm attack upon a facility.

The system showed the ability to identify targets, then track and engage them, as demonstrated by this video.

Additionally, the Drone Dome is a compact system with modular design, capable of being fitted to a vehicle as small as a standard civilian 4×4 truck. This in turn means the system offers additional benefits in terms on mobility and practicality for both military and civilian users.

Rafael state that the Drone Dome is designed to complement their other anti-air-and-missile defense systems to provide a flexible and multi-layered protection from the evolving threat.