Ukraine – Is the Clock Ticking Down?

As Russia continues to mobilise forces around the periphery of Ukraine the world watches to see what is going to happen. There are now less than twenty-four hours to go before US intelligence’ publicly stated prediction that a Russian invasion would begin on the 16th of February is due to occur.

The countdown has seen a significant response. Military aid from NATO nations has increased, with countries shipping large quantities of anti-tank munitions, small arms ammunition and now Stinger anti-aircraft missiles to Ukraine. NATO has also begun to deploy forces to Poland, Romania and the Baltic States in the event of the crisis widening and also in the event of a mass refugee catastrophe should fighting break out. 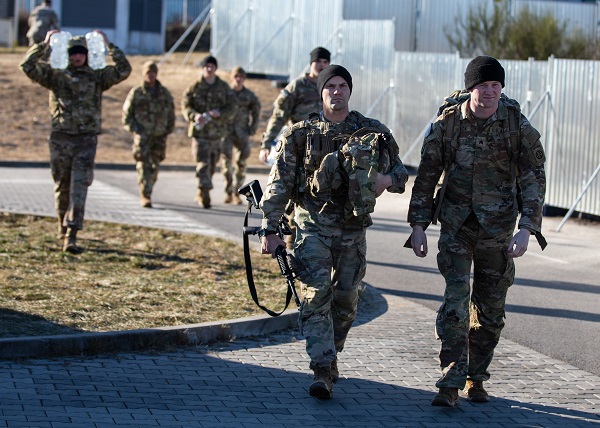 Paratroopers assigned to the 82nd Airborne Division carry their equipment and supplies to their vehicles before departing the G2A Arena in Rzeszow, Poland, Feb. 12, 2022. (U.S. Army Photo by Master Sgt. Alexander Burnett)

Additionally, many countries have begun to clear embassy staff from Ukraine and recommend, and in some cases order, that their citizens leave the country.

And now everyone is waiting to see what is going to happen.

Certainly, the Russians have mobilized to an extent that hasn’t been seen in years. As of today, the 15th of February, it is reported that Russia has deployed a total of 105 Battalion Tactical Groups near Ukraine, and another 14 are in transit to the area. 119 BTGs represents approximately 70% of the Russian total inventory of these tactical units and they have been mobilized from huge distances.

On the night of the 14th of February considerable amounts of footage appeared on social media channels of tanks, self-propelled artillery and armoured personnel carriers moving along roads in the immediate vicinity of the Ukraine border. That is unusual – moving tracked vehicles on roads is both taxing for the vehicles and damaging to infrastructure and is generally kept to a bare minimum.

But it would certainly be necessary for any invasion as units moved into their jumping off positions.

Additionally causing concern is the deployment of many ancillary units that would be required for combat operations, but not necessarily for an exercise, which is what Russia states is occurring. Hospital units and tactical missile systems have been seen setting up in increasing numbers, along with air defence units.

Large numbers of helicopters and aircraft have also deployed to the area, with the former also off airfields and into forward deployment positions. Types identified are Mi-26 heavy transports, Mi-8/17 medium’s and Mi-24, -28 and Ka-52 attack helicopters.

Looks like a Mi-8AMTSh helicopter squadron in Belgorod. https://t.co/PK8EiSZZng

In terms of aircraft, the large numbers kept in the region already have been reinforced with numbers of specialist attack planes such as Su-34s and specialist fighters, including Mig-31s.

Additionally, substantial numbers of marine landing ships sortied yesterday and today from Crimea, joining six landing ships from the Northern Fleet that had sailed around Europe and through the Mediterranean and entered the Black Sea on the 8th.

The Russians are, as stated, firm in their message that these actions are all part of military exercises. In fact this morning they have, with great exposure, began to withdraw some units from the area on the grounds that they have completed their training and can now return to their bases.

Optimists on the situation see this as a very positive step, while pessimists state that this is the same pattern and media message put out before the Russian invasions of Ukraine in 2014 and Georgia in 2008.

What is very notable is that the Russians are being very loud in their criticism of NATOS reaction, with a spokesperson saying that:

“15 February 2022, will go down in history as the day Western war propaganda failed.”

And this leaves us with the Million Dollar question.

Is this still an intended invasion?

Time will tell on that, but perhaps the stronger than anticipated reaction from the international community has made the Kremlin cool their jets. Or perhaps this was a test to see just what sort of reaction Russia would get to any action against Ukraine, maybe even to discover what cracks could be opened in NATO and identify possible sources of support the Kremlin can now cultivate.

And maybe it WAS just an exercise, though admittedly an exceptionally thorough one, but still a possibility.

All we can say is that while the Russians have such a large segment of their military in readiness on the Ukraine border, we will just have to continue to wait and see.