On the evening of the 17th of January, the British Ministry of Defence dispatched two Royal Air Force C-17s to Kiev, the capital of Ukraine. This was followed, at the time of this going live, by at least two more C-17s on the morning of the 18th.

According to a statement by the UK MOD, the aircraft carried an unspecified number of light anti-tank weapons for use by the Ukrainian military for self defence purposes. 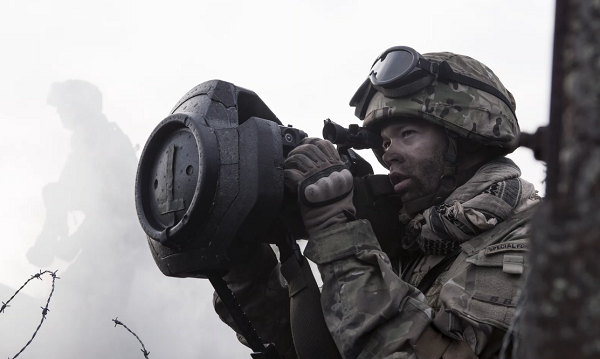 Though it is not confirmed, informed sources believe that the weapons being supplied in question are Next generation Light Anti-tank Weapons, or NLAWs for short. This rocket, originally designed and produced by Saab, is the standard light anti-tank weapon in use with the British military, which took it into service in 2009.

With a maximum range of 600 metres – though Saab state that it is capable of 800m if updated – the NLAW is capable of knocking out all but the most advanced armoured tanks in the world. Technically a fire-and-forget weapon, for guidance the NLAW uses a Predicted Line of Sight (PLOS) technique. In this the user activates the system and tracks the target for 2 to 3 seconds before firing. The guidance system then calculates the predicted flight path to ensure a hit.

The NLAWS is also a “soft-launch” weapon, meaning it can be fired from within buildings and cover without risking the firer as is the case with many earlier generation anti-tank weapons. As such it is an ideal anti-armour weapon for fighting in built up areas such as towns and cities.

The reason for the decision to supply the weapons at short notice to the Ukrainians is the growing fear the Russian military is about to launch an invasion of that country. In a statement on the decision in Parliament, the British Secretary of State for Defence, Ben Wallace, said:

“As of today, tens of thousands of Russian troops are positioned close to the Ukrainian border. Their deployment is not routine, and they are equipped with tanks, armoured fighting vehicles, rocket artillery, and short-range ballistic missiles.

“I can today confirm to the House that, in light of the increasingly threatening behaviour from Russia, and in addition to our current support, the UK is providing a new security assistance package to increase Ukraine’s defensive capabilities.

“We have taken the decision to supply Ukraine with light, anti-armour, defensive weapon systems. A small number of UK personnel will also provide early-stage training for a short period of time.”

The British actions come as Russia mobilises large numbers of troops on its border with Ukraine. Currently it is thought that over 100,000 Russian soldiers, possibly as many as 200,000 are massing in Russian western districts. The build-up has been ongoing for more than a month now, and those who are familiar with Russian military units have identified some being redeployed from as far away as the North Korean border.

There are also large movements of Russian airborne units to the region. These traditionally act as elite shock troops during Russian military actions.

Additionally, yesterday Belarus, a close Russian ally and which borders Ukraine to that country’s north, announced they are to hold a snap joint exercise with Russian forces. This will include some of the Russian Air Forces latest fighters, air defence units and armoured forces.

Russia states that they have security concerns about the expansion of NATO and that they are under threat of being surrounded. Their actions are in anticipation of a Ukrainian threat and are also an internal matter that is no other countries business.

Whatever the rights or wrongs of the two side respective positions, there can be no doubt that Western reaction is divided.

Of note is that the British aircraft avoided German airspace to make the deliveries to Ukraine, even though a direct routing would take them across that country. Germany in fact has embargoed delivery of weapon that Ukraine had ordered from them and the assumption for the long around flights are that either the Germans forbade overflight, or else the British did it to avoid embarrassing an ally.

Germany is extremely closely linked to Russia through its reliance on Russian natural gas supplies. This fuels both power stations in Germany as well heating many of the country’s houses, something of real concern to the German government as winter bites.

Elsewhere, America has been full of stern words warning Russia against any advance into Ukraine, but this has not been backed up by obvious military assets. What measures of support Washington may be providing on the QT is subject to speculation.

But all in all, it seems that the whole of Eastern Europe is a powder keg that is having more fuel continually heaped upon it.

Russia-Ukraine crisis: Why Brussels fears Europe is ‘closest to war’ in decades – BBC