Last night the Russian cruiser Moskva was reportedly engaged and hit by Ukrainian missile batteries while sailing in the Black Sea off the coast of Ukraine.

The Ukrainians state they hit her with two of their Neptune missiles, while Russian state sources simply say that the ship suffered a fire which spread to ammunition stores. 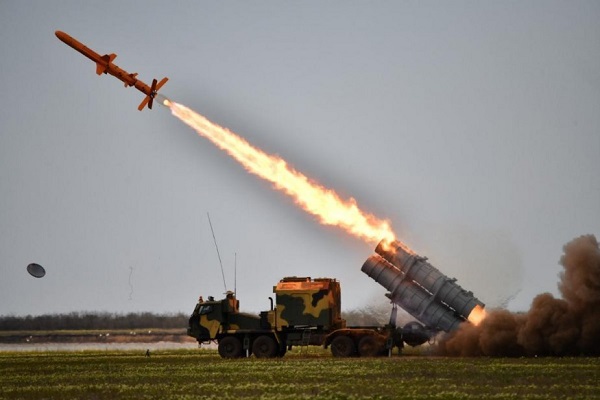 The fate of the vessel is currently unconfirmed, but Russian media did admit the vessel had been evacuated and observers have noted that the ship stopped broadcasting an SOS at around 1AM local time. This has led to speculation that the Moskva has sunk.

The ship was a Slava-class missile cruiser and served as the flagship of the Russian Black Sea fleet. A large ship, the Moskva was primarily designed for anti-surface warfare, to which end she was equipped with P-500 or P-1000 anti-ship missiles; huge weapons that are capable of speeds reportedly up to Mach 3 and of carrying a one tonne warhead.

The Moskva has already achieved some fame in this conflict as the ship that the defenders of Snake Island told to “Go Fuck Yourself” when ordered to surrender.

Additional news yesterday was the announcement by the White House that the United States is to begin transferring supplies of heavier weapons to Ukraine. 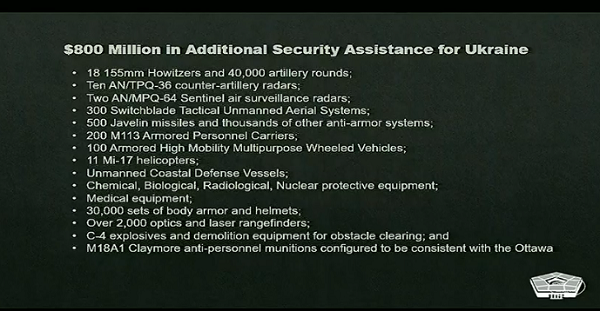 On the list are a battalion’s worth of 155mm howitzers and 40,000 shells, presumably a mix of NATO standard 155s and Soviet standard 152mm, which have been requested by the Ukrainians.

Of interest are the transfer of eleven Mi-17 helicopters, which will no doubt help revitalize the Ukrainian air transport capabilities, and two hundred M113 armored personnel carriers. 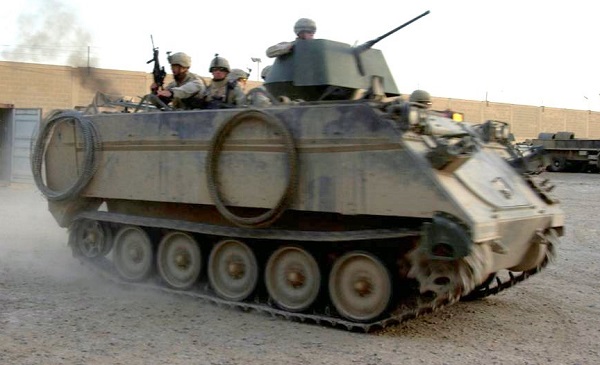 The M113 is a light vehicle for the high intensity warfare we are seeing in Ukraine currently but is broadly comparable to some of the older transports in use with the Ukrainians and will allow for more of their units to transit cross-country quickly in counter offences. They are also cheap, simple to operate and available in huge numbers, so I wouldn’t be surprised if more of these, probably in some quantities, are transferred in the near future.

Additionally of interest in the list is that the US will send “Unmanned Coastal Defense Vessels”. This is particularly intriguing.

I’ll admit, it isn’t a field I watch closely, but I was aware that a number of nations are experimenting with unmanned vessels, primarily for fishery protection or patrol work. I wasn’t aware of any such vessel being available for service, nor being armed with, what assumes, are anti-ship missiles.

Be interesting to see what happens there.

The United States seems to be following along with more discreet weapon transfers from European nations. Footage allegedly taken in Ukraine shows what appears to be Czech made RM-70 multiple launch rocket systems and DANA artillery in the process of being integrated into the Ukrainian armed forces. There are also currently unconfirmed reports that Poland has transferred one hundred T-72 tanks as well.

In terms of the actual situation on the ground, things are still largely stalled. The most significant event has been the surrender of an undetermined amount of the Ukrainian 36th Marine Brigade in Mariupol after their ammunition ran out.

The town, which has been fought over since practically the start of the war, has been devastated by the conflict with the Ukrainian government stating they believe 22,000 civilians have been killed in the fighting. However, reports are that parts of the garrison still hold out and that the town has not completely fallen yet.

Elsewhere, Russian progress appears to be slow, with some minor advances in the east as their forces have pushed south from Izyum. Their advance is still stalled elsewhere, and they have resorted to heavy artillery bombardment of Kharkiv.

My assessment, for what it is worth, is that the Russians simply do not have the strength to complete any worthwhile objective. The forces available are too closely matched, the Ukrainians are far more motivated to fight and will only get stronger as more equipment flows into their hands.

It is only a matter of time, I suspect, before they DO get the more advanced Western heavy weaponry they are requesting – I expect greater flows of artillery to be the first step in this – and the Russians could find themselves overmatched.