As a brief follow up to my previous article on unconventional weapons in use with the anti-government forces in Myanmar, another incident is alleged to have occurred that is worth reporting on.

The People’s Defense Force has issued a statement via social media stating that they had carried out the attack. 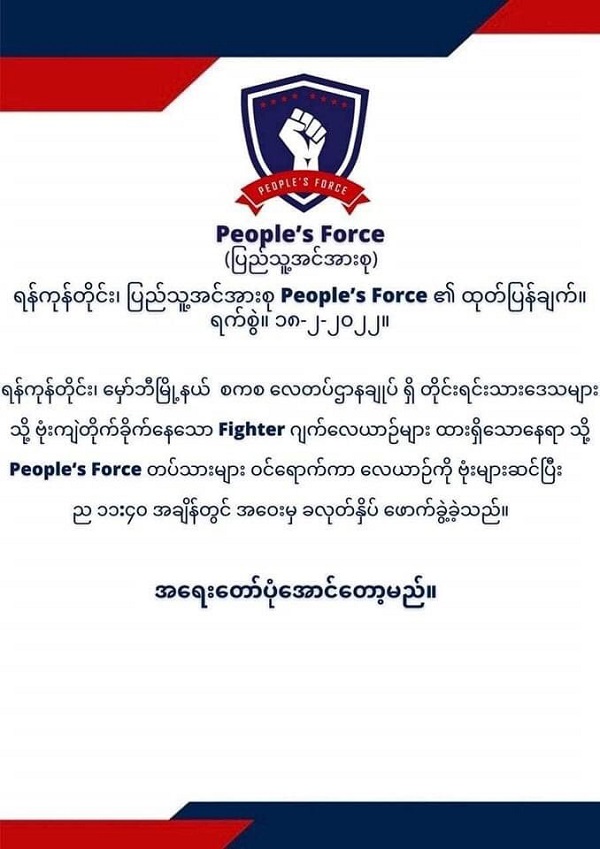 The story has been reported by anti-government news sources, but confirmation has been so far impossible to acquire. I have consulted with sources I have in county, and it is generally considered true, but unfortunately definitive proof is at this time not available. As a result, I considered not reporting this story, but three things made me think it worth covering.

One: Perhaps by issuing this video someone can provide definite proof of the event.

Two: If it is true, it would be an extremely telling sign of the state of the security at important government facilities and possibly the morale of the troops generally.

Three: Again, if true, it would be a substantial loss for the military junta.

The Myanmar Air Force has seen extensive use in attacking anti-junta forces since the military coup. Two of the key types used in these attacks have been Hongdu K-8s and Yak-130s.

These light aircraft are notionally trainers, but they are much cheaper and more efficient for regular use in simple bombing runs against anti-government forces than the more modern and high-tech front-line aircraft.

The Yak-130 is in fact the most modern aircraft in the Myanmar inventory, with the first being delivered in 2017 and the latest in December 2021. Eighteen are on strength and they are the MAFs primary advanced trainer, as well as seeing use regularly against anti-coup members. So, if two have been damaged by sabotage, that’s a fair proportion of the fleet out of action.

As said, this is still unconfirmed, but if any additional information comes to light, I shall update this report accordingly.

Improvised Weapons of the Myanmar PDFs