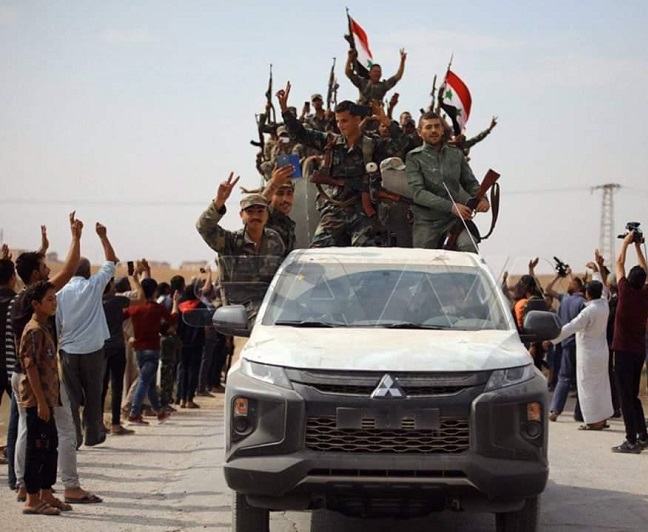 Following on from yesterday’s report on the situation in Syria and the twist and turns that are occurring, today has seen even more dramatic developments.

The Syrian Democratic Forces (SDF) and forces from the Syrian Army have reached an agreement that will allow the Assad government to take control of the SDF-controlled areas.

The deal will see the abolishment of the SDF, with all its forces integrating into the 5th Corps under Russian control. The Syrian government will also take control of critical cities such as Manbij, Kobani, Hasakah, Raqqa and Qomislo and will have access to the majority of the Turkish border area for first time in eight years.

The principle part of the agreement concerns dealing with the Turkish invasion. The SDF and Syrian Army are committing to jointly restoring all Syrian land that is occupied by the Turks or their proxies. This includes the Afrin region that was conquered by Turkey in 2018.

Already Syrian Army troops are headed north to reinforce the SDF on the border and taking position in Manbij, including heavy armour. The Russians are reported to be providing air cover.

Things are certainly highly volatile. President Erdogan earlier today stated his forces would advance on Manbij in order to take it  and Turkish tanks began engaging the SDF forces defending the town. But now the SAA is deploying tanks in the city and an armoured clash is possible. At writing there are also unconfirmed reports that the Russian Air Force had bombed Turkish auxiliary forces around Manbij in response.

In the United States there are serious moves afoot to sanction Turkey – a bizarre response as it was US actions that caused the crisis. US troops will reportedly be out of Syria within the week.

The real question now is how will this sudden change of fortunes affect the Turks and their proxy forces. With the Syrians now publicly stating they will reclaim all their territory then Erdogan’s plans to resettle millions of refugees in Rojava will come to nothing. As most of the refugees in Turkey fled from Assadist forces, they will continue to wish to stay in Turkey.

For Turkey, this is more than just an issue of dealing with millions of refugees. The “TFSA” that forms the proxy force that the Turks are using for much of their invasion force is composed of large numbers of jihadists. Turkey has for several years supported Jihadi groups with arms and other support, as well as providing safe haven and transit into Syria for Islamist fighters. This is all part of a deliberate policy to expand Turkish influence in the Middle East through the use of Islamist groups.

These groups operate as Turkish mercenaries simply because they expect to get rewarded for their service with lands and loot. If these are denied them by this sudden change in fortune, they will not likely sit still quietly. Turkey might find they have allowed a snake into their house.

There is also another issue for Turkey. President Erdogan’s government always justified the invasion as a counter terror operation as they considered the Kurdish YPG part of the SDF to be the same as the PKK, a terrorist group that has been waging war with the Turks for several decades.

Though this opinion is contested, it is the primary reason for the Turkish invasion. If said invasion fails then the Turks face the prospect of not just having to harbour thousands of disgruntled jihadis, but also tens of thousands of furious Kurds, Arabs and Assyrians just across the border – many with years of combat experience against ISIS.

No doubt some will be interested in striking back at their northern neighbour in retaliation. And no doubt the Assad regime will be happy to allow them; they know the Turks have deliberately sponsored their enemies in the civil war and also will be delighted to have fighters of questionable loyalty leave Syria to fight the Turks with the PKK.

So it’s possible that Erdogan’s “counter terror” operation will result in much a much greater terrorist threat in Turkey after all!