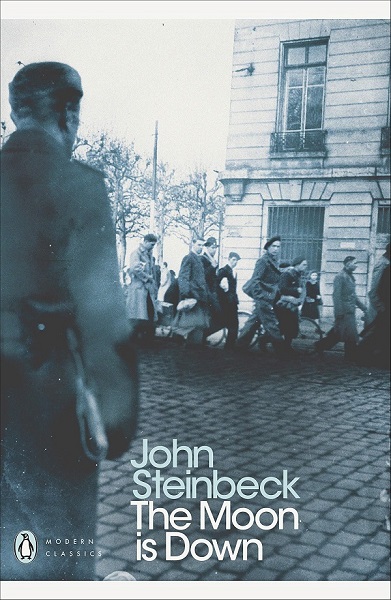 Although a work of fiction The Moon is Down is both an excellent example of a great piece of successful wartime propaganda that should be of interest to historians as well as of a writer understanding his target audience far better than the critics.

A short book at 188 pages, the story follows the surprise occupation of a small town by a foreign power. Neither the country occupied nor the aggressors are specifically identified, but are thinly veiled as both Norway and Germany respectively.

The small local garrison is all but annihilated immediately at the beginning through the treachery of a local agent and the story covers the gradual deterioration of the relationship between the towns inhabitants and the occupation force. In short Steinbeck brilliantly demonstrates an understanding of the dynamics between both the occupied civilians and the invaders and how they come into gradually escalating levels of conflict.

This collapsing situation is crafted by the writer in such a way that it could be identified with by practically any person experiencing a foreign occupation – which no doubt was Steinbeck’s intent. In contrast to many propaganda works The Moon is Down (title, incidentally, taken from a line in Macbeth) features no great dramatics from the “good guys”, the victims of the occupation. Instead, murders of enemy soldiers or acts of sabotage are carried out “off camera” and often referred back to.

There are no great battles, no last stands. Instead the local populace carry out their resistance quietly. When someone is to be executed as punishment for these acts they go to their fate in a way that is horribly realistic – fearful but stoic. There is no crass speeches about “dying for the motherland” or such. Steinbeck creates real humans, whose suffering is identifiable rather than mythologised.

Steinbeck also creates distinctive personalities for the occupation army that are not just caricatures of Nazi soldiers. Instead he makes them very human and charts their psychological descent from triumphant conquerors to frightened and brutal occupiers, surrounded by a hostile population. This is particularly interesting as he demonstrates a clear understanding of the importance on the psychology of soldiers that being under constant sullen resentment has.

The author also makes one of his most sympathetic characters the Colonel of the occupational regiment, who has seen the same situation in “the last war” and knows from the beginning just how things will pan out and is tiredly resigned to powerlessly repeating the same mistakes as before from the very beginning of the story. This alone makes this work practically unique as a work of propaganda and drew the ire of American literary critics at the time – probably why Steinbeck is still a renowned name and they are not.

In many ways more interesting is the history of the novel itself. Steinbeck was already an internationally famous author when the war began in 1939. A man with a clear understanding of the international situation, the dangers of the Axis powers and the inevitability of US intervention, he was alarmed by the success that Nazi propaganda was having on the rest of the world and on 26 June 1940, four days after the fall of France, met with President Roosevelt to discuss his concerns.

Steinbeck would then spend several years working for government intelligence organisations, including the precursors to the modern CIA: the Office of Coordination of Information (COI) and the Office of Strategic Services (OSS), both under the legendary William “Wild Bill” Donovan. Both men determined in 1941 that Steinbeck should write a work of propaganda to encourage both the forming resistance movements and US opinion on the issue.

Steinbeck was able to interview multiple refugees from a number of European nations and, as he recalled later, was struck by the many similarities in their stories despite national differences. As he “…did not believe people are very different in essentials” he initially set the story in America. This was rejected by his superiors as the US was not at war and the idea of American defeat was not a comfortable one. However, encouraged by his new refugee friends he changed the setting to a unnamed country with elements of multiple real ones.

The revised script published in March 1942 as America reeled under the Japanese offensive. Though some critics praised it certain others thoroughly condemned it as soft and even as demoralizing, charges that deeply wounded Steinbeck.

However, these critics didn’t really understand the experiences of the occupied populations of Europe, who certainly did approve of the novel. Hundreds of thousands of copies, often made on illegal presses and distributed at great risk, were circulated in the Netherlands, Denmark, Norway and France. The Moon is Down was the most popular piece of propaganda in these countries, resonating with the audience there – as well as in China, the Soviet Union and Italy.

Because of this The Moon is Down is good reading for historians interested in the Second World War or Intelligence history. But it is also should be recommended reading for military officers, particularly those who may find themselves serving in distant lands with a hostile population and uncertain local allies. Because Steinbeck was correct, people are essentially the same everywhere.