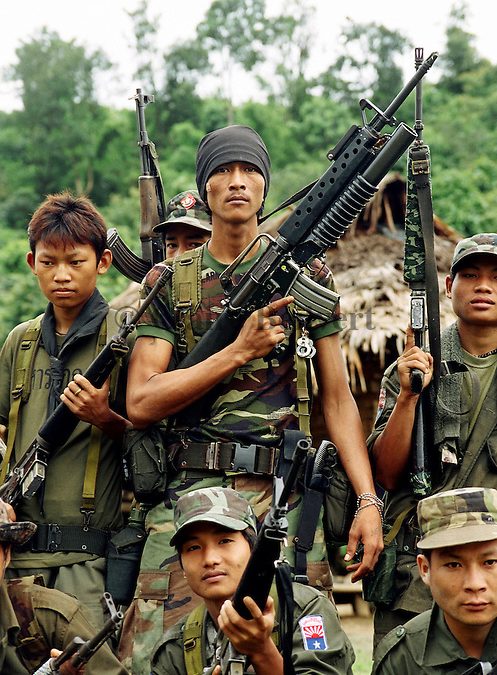 A member of the Sino-Tibetan peoples, the Karen’s origins are difficult to trace, though scholars believe they moved into the area that is present day Burma between 300 and 700 CE, not long before the Bamars who now form the majority of the population. Settling the lush river valleys, the Karen called the new lands Kawthoolei – still the Karen name for their existing territories.

But they were soon driven off by the immigration of Bamars into the area and so ended up on the periphery of the country. As a result the Karen people live mostly in the hills bordering the eastern mountainous region and Irrawaddy delta of Myanmar, primarily in what is now known as Kayin State and formerly as Karen State.

They constitute the third largest ethnic population in the country after the Bamars and Shan, with an estimated 7 million living in Burma – though the ongoing war makes this figure far from certain.

A substantial number also live in northern and western Thailand, where they form the largest of the “hill tribes”. There is also now several hundred thousand living in camps in Thailand, refugees from the decades of war that has been fought between the Karen and the central government, as well as a diaspora abroad.

This millennium-long conflict between the Karen and the Bamar is the root for the development the KNLA.

With the British invasions and eventual occupation of Burma (see Part One of this series for a brief history) the Karen, marginalised by the Bamars, began to move more into the mainstream of colonial Burma. Many Karen adopted Christianity and found favour with the British, particularly in the new colonial army where they were considered more reliable and loyal than the Bamar majority, who were excluded from military and civil positions.

As a result Karen soldiers proved instrumental in putting down anti-British rebellions by the Bamar in the early 1930s. These underlying issues between the two groups exploded into sectarian violence during the Japanese invasion of Burma after Pearl Harbor in 1941.

The Burma Independence Army (BIA), formed largely of Bamar, assisted the Japanese in their war to drive out the British. Atrocities followed with Karen villages destroyed and the occupants slaughtered. Staying loyal to the British, the Karen fought back in a guerrilla campaign centred in their mountain homeland. As the tide of war changed and the Japanese were driven out, the Karen sought revenge and Bamar villages suffered.

With the end of the war, Britain prepared to leave it’s colonies and the various ethnic groups in Burma planned for what sort of independence they would aspire to. But the rush meant that Karen aspirations for greater independence were never properly discussed. Determined not to be marginalised, the Karen formed the Karen National Union (KNU) in early 1947.

To protect the Karen people as the situation in Burma worsened the KNU formed the Karen National Defence Organisation (KNDO), with many members of this organisation being soldiers who had served in the colonial army. This would later become the KNLA.

Burma became independent in January 1948 and sporadic fighting took place between Bamar and Karen militia groups until things came to a head in 1949.

On 30 January, the KNDO was outlawed by the Union government of Burma and the Karen were purged out of the army two days later. General Smith Dun, an ethnic Karen and Commander-in-Chief of the army, was replaced by Ne Win, later to become military dictator of the country in 1962.

On 31 January, 1949, the KNU declared war on the central government and on 14 June 1949, proclaimed the Karen Free State, along with the Four Principles.

These have become a key point in the KNU/KNLA struggle for autonomy and are:

The KNLA fought a conventional war initially, and even took and held the town of Insein, close to the capital of Rangoon, for four months.

But as the war waged on into the 1950s the Burmese Army, the Tatmadaw, began to gradually grind down the Karen. By the 1960s the KNLA had been driven from the Irrawaddy river delta and were primarily restricted to the mountainous Thai border.

In 1968 the Tatmadaw introduced the “Four-cuts strategy”, designed to sever the KNLA from their key inputs: funding, food, intelligence, and recruits. The policy essentially turned disputed areas into free-fire zones and a brutal methodology of attacking villages and civilians ensued.

Villagers were frequently relocated by force. Forced conscriptions or porterage was also common, providing free labour for the military and rape also became a tool of social control.

While slow to take effect, the ‘four cuts’ was ultimately successful. It both terrorised local populations, making them fearful of cooperating with the KNLA and denied them access to the resources they needed.

Factionalism also beset the Karen. In the 1970s they faced issues with religious extremists in the Karen community and some of their own officers effectively becoming warlords that answered only to themselves.

In 1976 the KNU went through reforms and altered its demands from an independent home state to just greater autonomy with Burma, something other ethnic groups have achieved. However, the KNU/KNLA continued to gradually lose ground to the Burma Army.

A catastrophic development for the organisation occurred in 1994 when Buddhist and Christian members of the organisation fell out on religious issues. A large number of Buddhist Karen split off and formed their own group, the Democratic Karen Buddhist Army, or DKBA.

This group gave critical information to the Tatmadaw on the defences of Manerplaw, the KNU capital and thought to be a nigh-on impregnable fortress that had resisted multiple assaults by the Burma Army. The DKBA and Tatmadaw launched a combined assault that saw the defences quickly fall as the DKBA, the fortress’ former defenders, led the attack through the jungle. The KNU and the population of the area retreated and the town fell on the 27 January, 1995.

This was followed by the taking of another critical KNU stronghold, Kawmoora, which had resisted attacks for ten years and seen the deaths of hundreds, perhaps thousands of Burma Army soldiers. This fortress fell on 21 February 1995.

These defeats hit the KNLA hard as it lost a lot of its tax revenue which it controlled through these areas. More splits occurred within the KNU, weakening the Karen further throughout the 2000s and the Burma Army launched yearly offensives into KNU territory, aimed at disrupting development and KNLA supplies.

These attacks continued to generate a steady stream of refugees into Thailand and casualties on both sides as the KNLA became more adept at guerrilla tactics in the jungles and aimed at attacking the Burma Army’s supply lines whenever they pushed into KNU territory.

There was some hope of peace when the KNU signed the Nationwide Ceasefire Agreement (NCA) with the government of Burma on 15 October 2015, along with seven other EAOs.

Though talks continue to try to resolve issues, the Burma Army seems to have, at the time of this video being made, adopted a creeping strategy of gradually pushing into KNU-held areas, sometimes one field at a time. A shoot-on-sight policy still seems to be standard, leading to more displacement of civilians. And in response the KNLA continues to ambush Tatmadaw soldiers when they intrude, causing more casualties.

Though solid figures don’t appear to exist, the KNLA is thought to contain at least 7000 fighters, though local militias would probably swell those numbers during conflict. Kawthoolei itself is organised into seven Brigades that act as independent commands but which provide mutual support in the face of attacks.

Equipment used by the KNLA is varied but predominantly of western origin. M1 Carbines of World War 2 vintage were a favourite arm throughout the KNLAs existence, though their age and shortage of ammunition has led to these being moved into reserve or specialist roles.

The most common weapon used by the KNLA is the M16, often Vietnam war leftovers that have seen plenty of use, but which is largely all that are available to the Karen due to a lack of outside support.

With peace still seeming uncertain it does look like that the Karens struggle, now in its 81st year, is liable to continue.

But despite its issues with limited and old equipment, low funding and lack of external support from the international community the KNLA – with generations of combat experience within its ranks -provides one of the most formidable jungle fighting forces on the planet today.