“The Lion’s Gate; On the Front Lines of the Six Day War” (2014) by Steven Pressfield 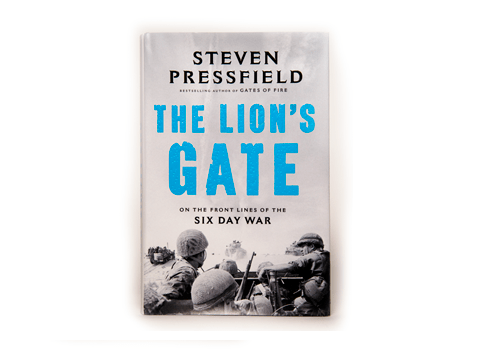 Dealing with a subject that has had copious coverage – the astounding victory of the Israeli Defence Force over numerically superior Arab armies in the “Six-Day War” of 1967 – Pressfield adopts an unusual methodology in writing The Lions Gate, which he admits to immediately in the prologue.

Dubbing it as “hybrid history”, Pressfield seeks to not provide a comprehensive history of the war, but to impress upon the reader the human quality of the war, telling the accounts of a range of characters from simple recon troopers all the way to the supreme commander Moshe Dayan. It is here that the writer admits to having taking liberties.

Dayan died long before the book was written and, as his words are written in the first person, this is in essence fiction. The text also relies on the testimony of multiple persons many decades after the events that they are recalling. Again, Pressfield is the first to admit that such accounts are not documented fact and should be treated as such. Indeed, he admits that sometimes the testimony of different witnesses to the same event have different versions – a well-recognised phenomenon.

Instead the author has attempted to convey what he describes as “the human reality of the event…What is important to me is the event as the man or woman experienced it.” And he certainly achieves that, as the book is highly evocative and extremely engaging.

Pressfield’s “hybrid history” may blend fiction in his interpretation of what Dayan would say if he was actually interviewed for the book. But it is fiction which has been exquisitely researched and is supplemented with a mass of genuine accounts and a deep study of the campaign and the events involved.

What is particularly expressive are the eye witness accounts about events other than the fighting, such as the reaction of the soldiers that took the Wailing Wall in Jerusalem. Pressfield does an excellent job of just what this meant to the Jewish troops who participated, really illuminating what this event meant to them on both a personal and cultural level.

It is certainly worthy of a read for anyone with an interest in the war, or even war in general, for getting across something that is sometimes missing from pure history – an identification with the people involved.

The Lion’s Gate is available at time of publishing at Amazon.com for $4.99 on kindle or $15.29 in paperback.