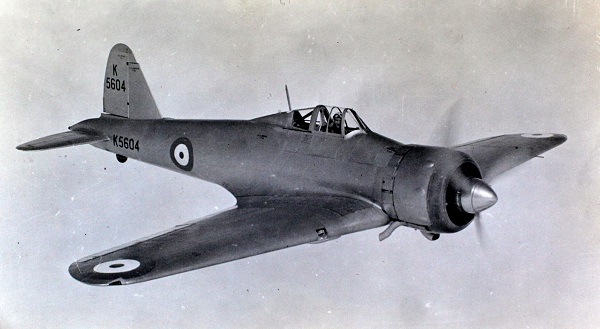 (If you want to avoid reading the article and prefer video format, here is essentially this article on YouTube…with cool dogfight clips!)

The Gloster F.5/34 is one of many intriguing “what-if” fighter aircraft that aviation historians and enthusiasts still discuss today.

First flying in 1936, the initial prototype was modelled as a monoplane development of Gloster’s Gladiator biplane fighter, which was just then about to enter service with the Royal Air Force. 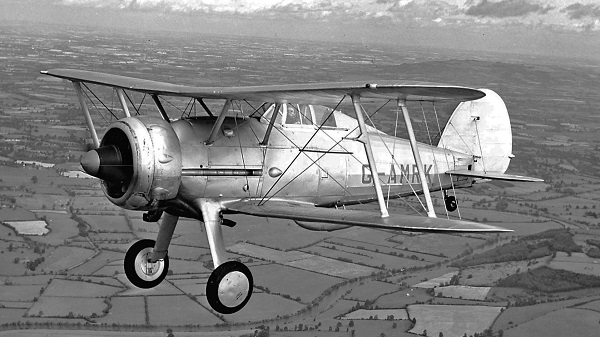 Such an evolution was natural. This course had already been followed by the Hawker company when they developed their famous Hurricane fighter, which was evolved from the Fury.

Like the Hurricane, the F.5 was a major update on its biplane predecessor.  Designed to carry eight machine guns in its wings and built with a stressed metal skin construction, the F.5 was at the cutting edge of aero engineering at the time. 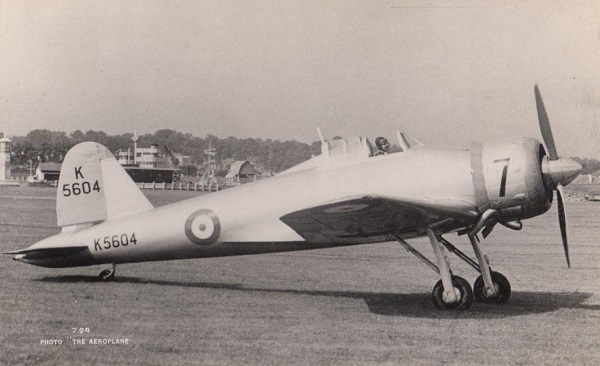 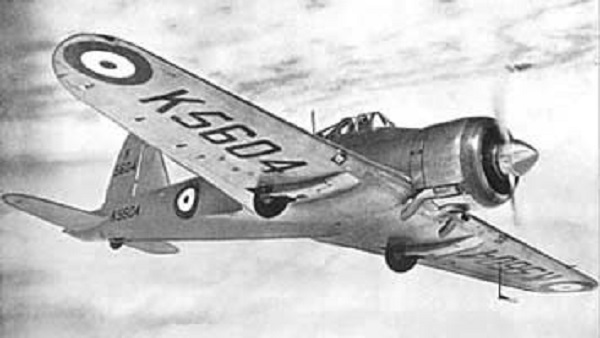 With a retractable landing gear, the design was well steam lined and also featured an excellent canopy, which provided superb all round visibility for the pilot. It was also a much more “proper” looking aircraft when compared to the rival designs that were competing against it; the Bristol Type 146 the Vickers Venom and the Martin Baker MB.2. 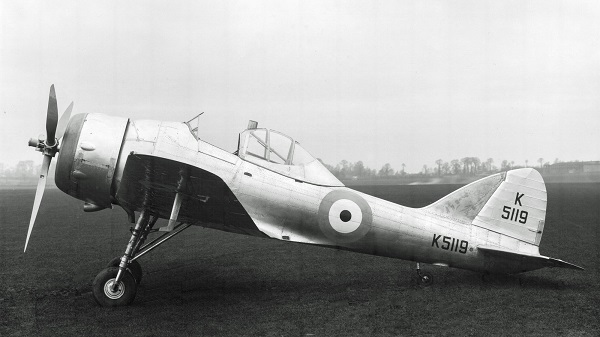 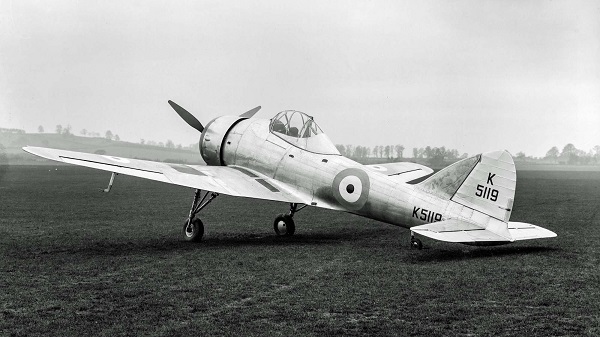 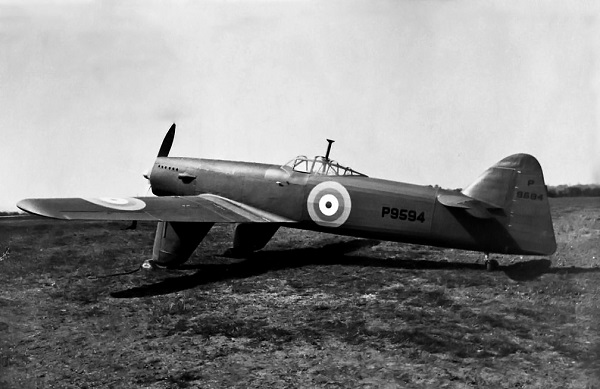 During trials in 1937, the F.5 was praised by the test pilots, who said that the aircraft had excellent handling and agility, as well as better visibility than contemporary aircraft.

Despite this the F.5 never made it to production. Only 2 prototypes were built and these were soon relegated to instructional purposes.

So, what happened? How come the Hurricanes and Spitfires were the heroes of the Battle of Britain, and still renowned today, whilst the F.5 is relegated to being a foot note in aviation history?

The answer is twofold.

First, the F.5 was designed to use a radial engine. In fact the test prototypes used the same Mercury engine as the Gladiator.

Providing only 840 horse power, the Mercury was a good fighter engine in 1935, but by 1937 it was obvious to the British that their new inline engines, principally the Rolls Royce Merlin, were the best bets for the future.

Additionally, the F.5 was ironically hindered by the success of its predecessor, the Gladiator biplane.

That aircraft would be ordered in, what was for the time, considerable numbers. This meant that Gloster already had more than enough work and as a result were slow to get the prototypes built for testing. The second F.5 only flew in 1938, by which time the Hurricane was already entering service.

So, that should be the end of that, surely? The F.5 was an aircraft that was doomed from its conception, made obsolete by an engine that meant it would never be able to compete against contemporaries equipped with stream lined, liquid-cooled inline engines. 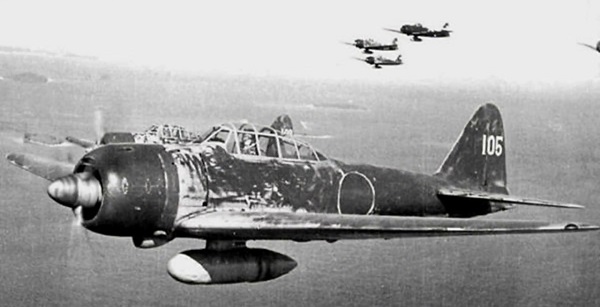 The Mitsubishi A6M, the infamous “Zero”. This fighter was designed slightly after the F.5, first flying in 1939 and entering service in 1940. Like the F.5, it had a heavy armament for the time, was strongly built with an emphasis on agility, had a canopy with excellent visibility…and had an air-cooled radial engine which, on paper at least, was inferior to contemporary inline ones.

Yet the Zero was not inferior to any aircraft of its day; far from it. Using the Zero, the Japanese hacked Allied aircraft from the skies of Asia in 1941 and ‘42, and the basic design stayed dangerous as a dogfighter through to the end of the war.

There is also, and this is what gets most people excited, more than a passing resemblance between the A6M and the F.5. And on paper, they had similarities as well. Wing loading was slightly heavier on the F.5 than the Zero, but still considerably less than on the Spitfire and Hurricane, let alone the German Bf-109!

So, this raises an additional couple of talking points. Did the Royal Air Force miss out on the opportunity to have their own “Zero”, an agile dogfighter that would have made mincemeat of the Luftwaffe’s best at the beginning of the war?

And did the Japanese copy the F.5 to make the Zero?

To answer the first point, it seems unlikely that the F.5 would have been spectacularly successful in the European theatre. While it certainly may have been useful and a capable dogfighter, the Royal Air Force’s requirements were aimed more at interceptor types that could deal with bombers and hold their own against similar aircraft. In other words, the Spitfire.

It’s noticeable that some other agile, radial engine fighters, like those fielded by the Italian’s early in the Second World War, did poorly in Europe and Africa against inline-engine fighters. Radial fighters that did do well tended to have the same protection and heavier build priorities, such as the Focke-Wulf, Grumman and Yak designs.

These could utilise the same performance based tactics as the inline fighters, which could negate the turning abilities of aircraft such as the Zero and other fighters designed with a focus on all out agility.

As for the Japanese copying the F.5, this seems unlikely. Though they probably were aware of the design, with the F.5 flying at the Hendon air show in 1937, the resemblance is likely more an example of convergent evolution in design as both aircraft were built to similar requirements.

In fact the assertion that the Zero is a copy of the F.5 simply ignores the fact that the Japanese in the late-1930s had an aero design industry that was second to none. Western designs acquired by them at that time were all generally considered inferior to their own fighters – something that the events of early 1942 seems to bear out.