The Chieftain; Real World Experience for Virtual Reality – And an Engaging Resource 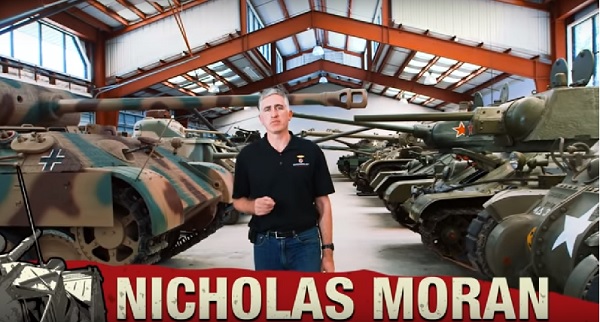 I’ve discussed before how some of the best research on military subjects is to be found online today. But The Chieftain manages to intersect between where mass entertainment and academia meets.

Nick Moran, A.K.A. The Chieftain is a former tanker who served in Iraq and Afghanistan with the U.S. Army. Now he is probably best known as the face-of-and-historian-to-World of Tanks – an online game where players take control of a historic tank or vehicle and battle other players.

But it is The Chieftain Youtube channel that holds a great deal of material that will interest any student of armoured warfare. Moran has produced a range of videos that provide unique insights into various tanks themselves, as well as doctrinal history and interviews with some of the foremost current authors in the field.

For those seeking knowledge of the tanks themselves, The Chieftain features a dedicated series; “Inside the Chieftain’s Hatch”:

In this series Moran examines various tanks, explains their history and special features and explores the interiors. As a former tanker he is able to bring a professional appreciation to the vehicles he is examining and this comes across in the videos in a clear, concise presentation.

For those with an interest in the history of armoured warfare, and not just the vehicles, he has produced a dedicated series on the formation and evolution of different nations armoured doctrine in the Second World War:

(Including those that might not first occur as exponents.)

For the more serious academic there is also a specialist series featuring lectures given by Moran on several subjects, as well as museum tours:

Moran is an excellent presenter, able to make whatever subject he is talking about clear and interesting. He’s previous military experience means he brings a practicality to his examinations of the subject that isn’t that common.

In addition, this is no amateur effort. By combining with an online entertainment creator The Chieftain’s production values are exceptional. It is, in essence, far superior to offerings you might find on television due to its ability to offer greater focus on the subject.

As a result one can find something for anyone with an interest in tanks and armoured warfare on this channel – from the casually interested to the Professor of History.