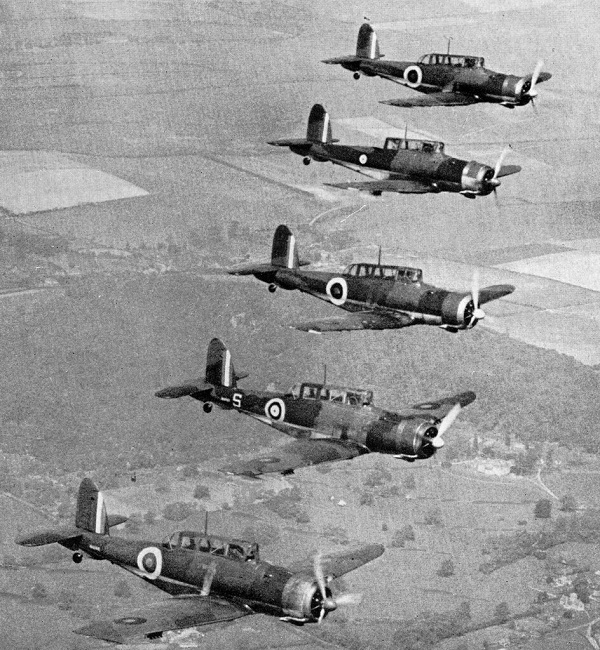 The Blackburn Skua is, like many other contemporary aircraft designs of the mid-1930s, an aeroplane that had good performance when it was first proposed but which was outclassed when it entered service.

Despite this the aircraft gave solid service at the start of the Second World War, serving through some of the hardest battles and managed to chalk up a good record in the limited span that it was in combat.

Designed to a 1934 requirement for a two-seat carrier-based dive bomber, the Skua would have its specifications changed to also act as a fighter.

This is not a great idea, as the requirements for these two types are very different. Any fighter that has to carry a second crewman is going to be at a great disadvantage to a single seat fighter.

But there were good reasons for the decision.

Firstly, the Fleet Air Arm (the organisation that flies the Royal Navy’s aircraft) understood the difficulties at that time of trying to fly and navigate alone across open ocean. A second crewman, who could assist in this by using specialist equipment, was a massive help to a pilot operating at sea.

It’s notable that this idea was so entrenched that it was even stipulated in later carrier fighters like the Fairy Fulmar.

The FAA also didn’t plan for its carrier aircraft to be tangling with land-based fighters.

British thinking before the Second World War was that the Royal Navy’s carriers and fleets would primarily defend themselves with guns from air attack.

Their aircraft carriers featured heavily armoured decks that could shrug off attacks from bombers and protect aircraft within the ship when under attack.

This heavy armour, combined with the doctrine of not using the deck to store aircraft as was the norm within the US and Japanese navies at the time, meant that Royal Navy carriers operated much fewer numbers of aircraft than their contemporaries.

As a result it made sense to have those aircraft act as “jack-of-all trades” because they were available in such limited numbers.

As an aside, If you are interested in understanding more about the Royal Navy’s carrier philosophy, their carriers, aircraft and the battles they fought, you should check out armouredcarriers.com.

They’re an excellent source on this subject and I’ll put a link to their website in the description and to their Youtube channel at the end of the video.

The Skua was designed to act as a naval dive-bomber with the added ability to shoot down reconnaissance aircraft that were shadowing the fleet. It could also help protect against enemy bombers.

To meet these requirements the Skua had a pretty respectable armament for the time. Four .303 Browning machine guns were mounted in the wings, added to by a single Lewis or Vickers K machine gun operated by the navigator to protect the rear of the aircraft.

It carried a 500-lb bomb under the fuselage on a bomb crutch as its main striking weapon, and could also carry small 20 and 40-lb bombs under the wing.

As pointed out, the Skua was a compromise design and its performance showed that. Fitted with a Bristol Perseus radial engine, which produced just over 900hp with emergency boost, the aircraft’s maximum speed on paper was only 225mph.

But in many ways the Skua was a thoroughly modern aircraft, especially in contrast to the planes it replaced. It was the FAA’s first monoplane aircraft, as well as it’s first with retractable landing gear and variable pitch propellers.

Entering service aboard HMS Ark Royal in November 1938, the Skua was the FAAs’ main aircraft at the outbreak of World War Two. And it went into action almost immediately.

On 14 September, 1939, Skua’s attacked U-30 as it shelled a merchant ship. Unfortunately, the strike didn’t go well as two of the aircraft were damaged by the blast from their own bombs, causing them to ditch.

The U-30 was able to return to Germany with the downed crews aboard, the first naval airmen to be captured in the war,

Better success followed on the 26th when three Skua’s managed to shoot down a German Dornier Do18 flying boat over the North Sea.

Things began to pick up for the Skua’s when the German’s invaded Norway in April, 1940.

Skua’s would also enjoy a fair amount of success against German bombers over Norway in their fighter guise, being credited with the shooting down of forty aircraft and even one pilot, Lieutenant Commander William Lucy, making ace in the aircraft.

The Skua’s fought hard through the Norwegian Campaign, hitting ground targets and shipping, but suffered badly against fighters like Bf 109s  – which was exactly the sort of aircraft they were supposed to NOT tangle with.

A raid by Skua’s on the battle cruiser Scharnhorst on the 13th June, 1940 showed up the limitations of the type. Of fifteen aircraft launched, eight were shot down battling through the defending fighters and heavy flak clouds. Only one bomb hit the vessel, inflicting no damage.

Though it was appreciated that the Skua was in need of replacement, the aircraft would see use for a few more years. They served covering the British withdrawal from Dunkirk, losing some of their numbers to RAF Spitfires who weren’t familiar with the Skua nor the FAAs camouflage patterns.

They would also serve in the Mediterranean, even having to fight French fighters after that nation’s capitulation and helping defend the critical convoys that resupplied Malta.

The types final battle came on 6th February 1941 when, during Force H’s operation to bombard Genoa, an Italian Cant 506 float plane was shot down.

Soon after this the Skua was taken out of front line service and relegated to target towing and advanced trainers. The last one was struck from service in March 1945.